Would You Hit a $100K Vape? Double Barrel Gets Bejeweled

From $1,000 weed grinders to rolling papers made with edible gold, the cannabis marketplace is no stranger to luxury. But Double Barrel’s new extremely limited edition $100,000 diamond-encrusted vaping device—only two have been made—elevates the trend to a whole new level of decadence and hyperbole.

“If it doesn’t pull, what are we selling?”

Even without 180 grams of solid white gold or 3,000 diamonds, the standard issue Double Barrel operates on an audacious (but not quite novel) premise: it enables consumers to smoke two vape cartridges at once. The Double Barrel retails for $100 and is made of stainless steel; it also features a knuckle attachment that gives anyone using it the look of a hipster mobster (that includes Russell Brand, who sports one in HBO’s Ballers). Double Barrel teamed up with a handful of concentrate manufacturers, including the iconic California grower Sherbinski—famous for developing the beloved strain Gelato—to create a signature line of cartridges for their product.

Leafly Finder Has That 🔥🔥🔥!

For Gerard Alexander, the jeweler behind the bejeweled vaporizer, it’s more than a hunk of Grade-A clickbait—it’s a work of art. Alexander explained that each of the piece’s 3,000 black, white and gray diamonds has four prongs, which he fastened to the vaping device by hand. “It’s a really laborious process,” he duly explained.

“I’ve worked with a lot of jewelers, but there’s something special about this guy!” she beamed. “He’s a wizard. [This is] something that hadn’t been done before.” 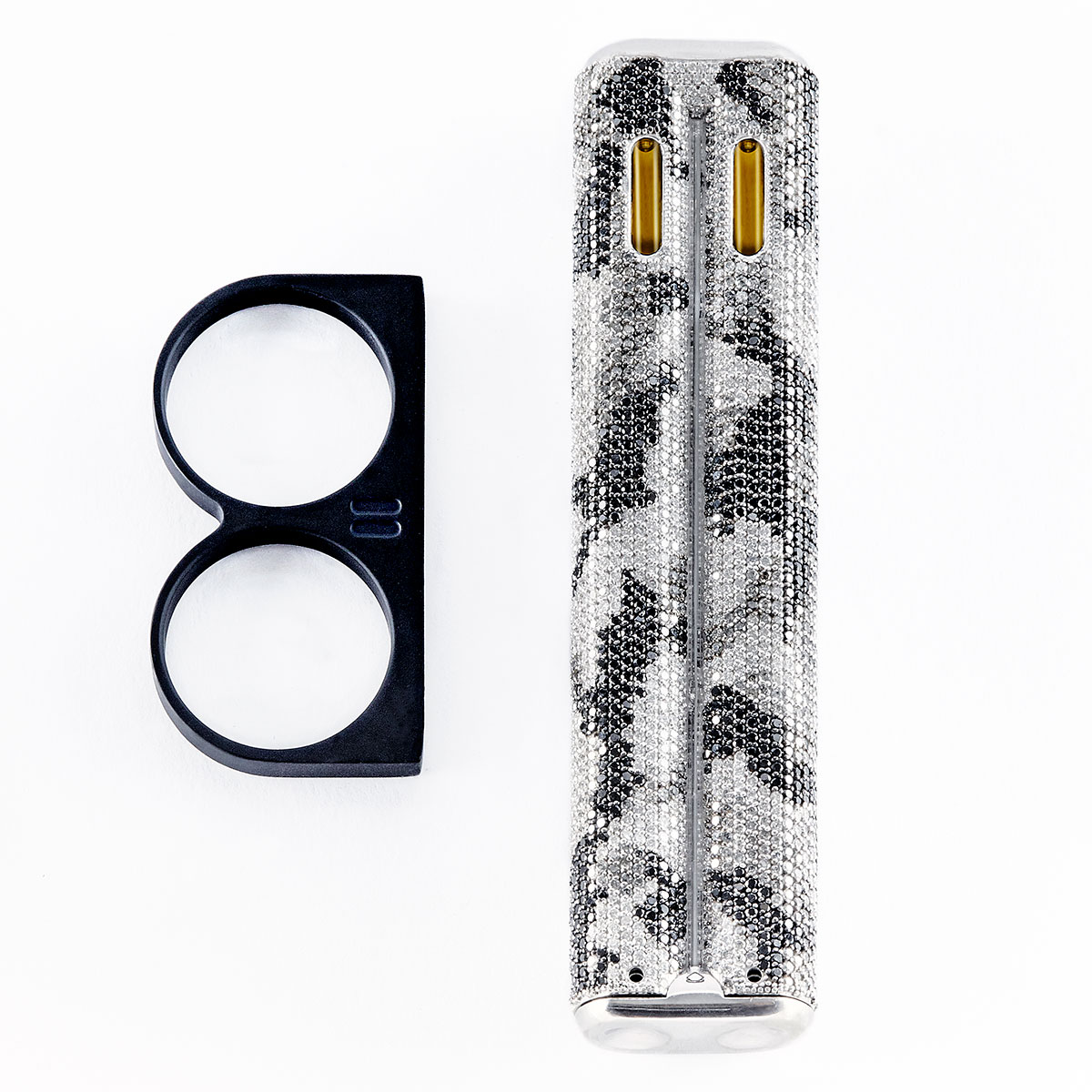 You can find Double Barrel vape carts and attachments at California retailers like MedMen in Los Angeles and Barbary Coast in San Francisco. (Courtesy of Double Barrel)

She already had a custom camouflage pattern for the piece; Alexander copied it with precision. He drew out the design by hand, and sent tons of videos and photos to Double Barrel for approval.

And then he had less than three weeks to turn the design into a reality. “It was a whirlwind adventure, but definitely fun to do,” he reflected.

While Alexander downplayed his own skill, Skalski made the stakes clear.

“If there’s one little nuance that isn’t right, it’s not going to pull,” she said. “If it doesn’t pull, what are we selling? Something beautiful, but not functional.”

I’m not going to argue with her, yet Skalski’s point hints at a distinction between functionality and well, practicality.

Restocking Your Top Shelf? Leafly Finder Has That 🔥🔥🔥!

Sure, it works, but if you had one, would you actually use it? Or would you lock it in a safe? Donate it to a museum? Or bust it out at your neighbor’s BBQ?

Let us know how you would put this six-figure vaporizer to use in the comments.

Max Savage Levenson likely has the lowest cannabis tolerance of any writer on the cannabis beat. He also writes about music for Pitchfork, Bandcamp and other bespectacled folk. He co-hosts The Hash podcast. His dream interview is Tyler the Creator.