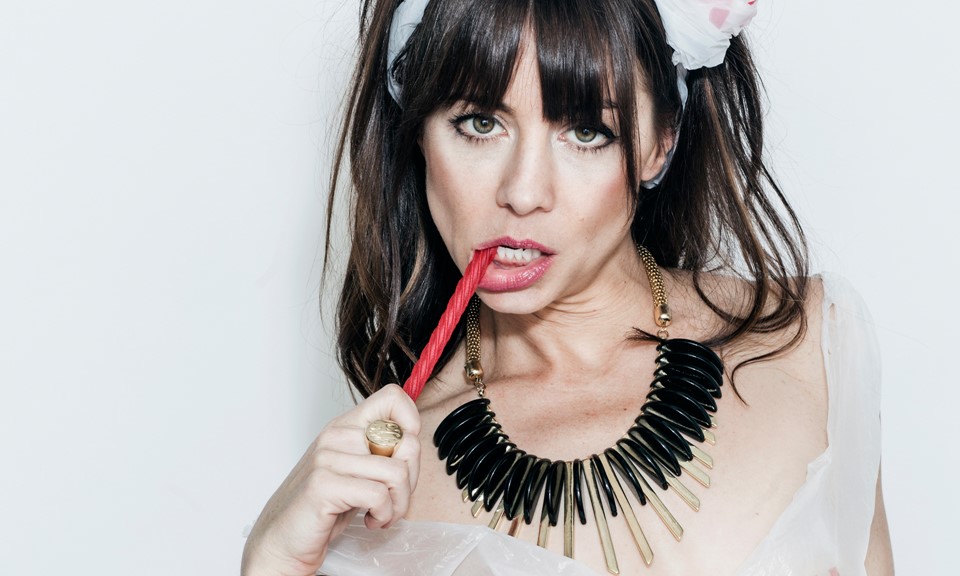 Leafly’s first-ever comedy tour is coming to Los Angeles! For those who can’t wait for the giggles to get going, we’ve got an exclusive interview with our L.A. show headliner: actress and comedian Natasha Leggero.

Leggero, who has appeared all over TV and late-night shows and who once roasted James Franco, stars in Comedy Central’s Another Period, which she also created and writes for. The show, set in Rhode Island in 1902, spoofs programs like Downton Abbey — think waistcoats and sex jokes. Season two is in the works, set to premiere later this year.

Leggero talked to Leafly about cannabis, comedy, and simple pleasures like getting high and checking items off her to-do list. She even gave some advice to those of you who will see her in person at the Feb. 27 show. (By the way, have you RSVP’d yet? You should. It’s free.)

Not in Tinseltown? There are other ways to get your Leggero fix. Another Period is available to stream on Comedy Central and Amazon, and you can also watch an hourlong standup special, “Natasha Leggero: Live at Bimbo’s,” on iTunes or CC Direct. If you want to see her live but can’t make it to the Leafly Comedy Tour, Leggero is kicking off a multicity tour of her own that begins in May.

Leafly: Cannabis and comedy are a great match, at least when you’re in the audience. What’s it like among comics?

Natasha Leggero: Just to be in the comedy community is to be in the cannabis community. I don’t think there’s a lot of squares in comedy. People are either sober or they smoke pot.

So what are your thoughts on performing for a cannabis-related crowd?

I think it’s always fun when there’s that atmosphere where everyone’s kind of partying but they’re not drunk, they’re smoking pot. It’s fun. The conversations are better, their attention spans are better, they’re quiet. It creates a kind of environment I like to hang out in.

OK, so fair to consider Natasha Leggero part of the cannabis community?

When you say the cannabis community, I don’t mean, like, the cannabis nerds. Because when I was on Getting Doug with High, people were like, “That’s not how you smoke a bong!” You know, people — Doug’s fans especially — got very up in arms about the way I was holding a pipe, how that’s not the right way. I’m not in that community. I’m in the more “get high and do your errands” community.

You’re saying you won’t be releasing your own cannabis line, à la the Marley family or Willie Nelson, anytime soon?

Oh, there will definitely not be a line of cannabis products from me. That’s not my brand. I would do more of, like, a canned-Champagne type of campaign. I would maybe do a curated playlist to listen to while you’re stoned, but that’s as far as I would get.

Wait, what would be on the cannabis soundtrack? And what about rehab?

And until the soundtrack business takes off, what else are you working on?

Michael Ian Black is headlining our Denver show! And he’s also been on Getting Doug with High in what might have been the most precious celebrity appearance ever.

When I told a friend about the Leafly Comedy Tour, she was impressed we had a female headliner, as she thinks of comedy as pretty heavily male-dominated. Is that fair? Is standup as bad as Hollywood in general?

There’s more men doing everything. So it’s hard for me to get too upset about it. I think we still have a ways to go, but it seems like it’s going the right direction, at least with women in comedy.

There are definitely some comedians that are obsessed with gender, I’m just not one of them. I like funny people, whether they’re men or women — a lot of my favorite comedians are women — but I’m not going to get on stage and start ranting about sexism in comedy. Because there’s sexism in the world, and I think females get a lot of opportunity in comedy, at least in my experience. If you’re funny.

OK, so maybe I’m way off. Is this a good time for women in comedy?

I feel like it’s a good time for women in comedy. I have my own show where I get to write. I was cast as a prostitute for 10 years, [so] now on my own show, every man I just cast as a gay person. That’s my own retaliation. [laughs]

I cast all the funny women I know. And I’m constantly working on other people’s shows who are funny women. I think it’s a cool time. All my favorite comedians — Tig Notaro, Maria Bamford, Nikki Glaser, Amy Schumer — so many people have their own show now. It’s exciting. Everyone I know is coming up and has their own show or is on their second show. Everyone’s getting to create things, and people are watching it. And everyone’s on tour.

There are now hundreds and hundreds of cannabis strains, many with silly names. If we came to you with a new one, what would you call it?

A name for my cannabis strain? Diamond Pussy.

I have zero clever replies to that, so I’ll turn it back to you: Anything you’d like to say to the L.A. audience before the show?

No red roses. Exotic flowers only.