It all began with a simple little T-shirt worn by a college student in Ames, Iowa.

In autumn 2012, a few students got together and formed the Iowa State University chapter of NORML, the National Organization for the Reform of Marijuana Laws. The group registered as a campus political group working to legalize cannabis through the established political process. That October, a member of NORML ISU designed a T-shirt. On the front it said “NORML ISU,” with the O represented by the head of the university’s mascot, Cy the Cardinal. The back read, “Freedom is NORML at ISU.”

Iowa State University owns the trademark for Cy, and for “ISU,” and so all student-group shirts have to get the OK from the college’s trademark office prior to production. The NORML chapter asked and ISU gave its consent. Everything was good. 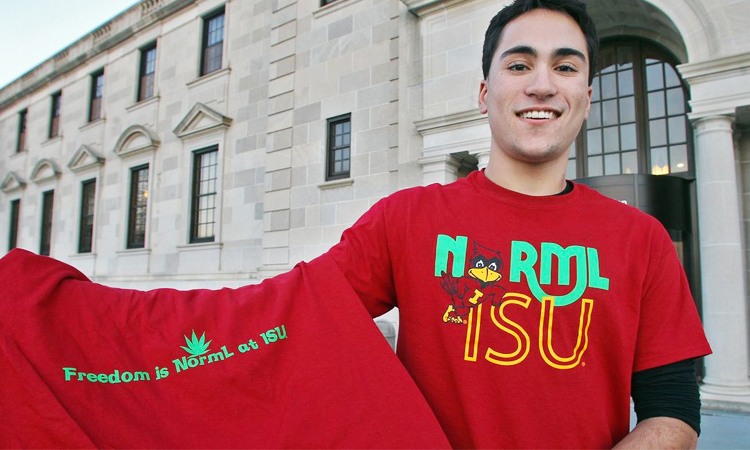 The T-shirts sold out within a week.

Then came trouble. On Nov. 19, 2012, the Des Moines Register carried a front-page article about marijuana legalization. The article included a photo of NORML ISU president Josh Montgomery wearing one of the popular T-shirts. Court documents would later describe the garment in question as “T-Shirt Design #1.”

Alarms pealed in the president’s suite.

One thing to know about Iowa State University: Its annual operating budget is around $600 million. Of that, the state provides around $180 million, or about 30 percent. And going into the 2013 legislative session, with ISU’s budget in the balance, Republicans controlled the House.

So when the House Republican Caucus called with a pointed question about ISU’s “approval” of NORML, things happened. Pants were soiled. Bricks were shat. That sort of thing.

According to court documents, ISU President Leath turned to his chief of staff, the deliciously named Miles Lackey, and inquired whether the university could revoke permission for T-Shirt Design #1. Lackey looked into the legalities, and said, pretty much, no. Aside from the Republican caucus, nobody in Iowa seemed to care. The university received exactly three e-mails from the public regarding the Register article.

One week later, ISU President Leath convened a regularly scheduled cabinet meeting. On the agenda was the notorious T-Shirt Design #1. The discussion centered around concern that NORML ISU’s use of the school logo might be misunderstood as a legalization endorsement by the university itself. Leath later recalled no actual deliberation on the issue. “It was more like, ‘Yeah, everybody gets it. Go fix it,’” he said in court documents.

On Nov. 30, 2012, a Friday, Madden and other administrators met on campus with NORML ISU members. The officials told NORML ISU members that T-Shirt Design #1 did not conform with university licensing policies. Also, the group would henceforth need preapproval from Madden prior to submitting future designs to the trademark office. (There are about 800 student groups at ISU. No other group faced such prior review restrictions.)

Madden also told the students that the janitor was out. James Wilson could no longer serve as the group’s adviser. Instead, Thomas Hill, ISU’s senior vice president for student affairs, volunteered his services as group’s interim adviser. In the court complaint that later followed, NORML ISU’s lawyers noted that the group “had little choice but to accept this ‘offer,’” as ISU requires student groups to have a faculty adviser.

In January 2013, ISU officials issued their new trademark guidelines. They included these rules:

“No designs that use University marks that suggest promotion of the below listed items will be approved: dangerous, illegal or unhealthy products, actions, or behaviors; firearms and weapons in a manner which is illegal, dangerous, harmful or destructive to humans; drugs and drug paraphernalia that are illegal or unhealthful…”

Duly chastened, the NORML ISU members went back to the T-shirt drawing board. They came up with a flurry of options. The trademark office approved a design that said “NORML ISU” across the front and “We are NORML” on the back. Another one said “NORML ISU Student Chapter.” That was OK too.

But others were rejected. One included the text “NORML: It’s Not For Everyone But It’s Not a Crime.” ISU administrator Leesha Zimmerman nixed that one because cannabis use in Iowa “is still a crime and it is still a crime on the federal level as well,” she stated. “I would suggest you use a statement in line with your mission (working to reform marijuana laws). Please resubmit with changes.”

In late spring the students submitted a design that read, “NORML ISU Supports Legalizing Marijuana,” on the front. On the back was the NORML name, “National Organization for the Reform of Marijuana Laws.”

Too much! declared the ISU trademark office. On June 13, 2013, ISU officials rejected the design. Their reasons? ISU officials claimed the front text “represented a call to action” that might be misconstrued as the university’s official position. Furthermore, they declared the design at once “sensational” and self-defeating. The shirt, they told NORML ISU members, would not change the public’s perception of marijuana.

Here’s an excerpt from the email Zimmerman sent to the student group:

Zimmerman also claimed that “[i]t can easily be inferred by the general public that the students attending Iowa State University want to legalize marijuana for their use and by default, the university must support the effort.”

Thus ends the contentious 2012-2013 academic year in the college town of Ames.

Then comes 2014. The undergrads give it another go. In March, the group submitted a T-shirt design to the trademark office. We’ve got it, this is it, it’s stripped down, there’s no way they can reject this one, they must have been thinking. Because the T-shirt contained, in its entirety, nothing but the name of the student organization. “NORML ISU.” The ink color varied to create the outline of a cannabis leaf.

“The full organization name needs to be included. Suggest this be inserted above Student Chapter. Also the silhouette of the marijuana leaf needs to be removed as this is a recognized symbol of an illegal drug”

Enough, said the students. NORML ISU lawyered up. FIRE, the Foundation for Individual Rights in Education, filed a federal lawsuit on behalf of the student group. The Philadelphia-based nonprofit group specializes in free speech and religious liberty cases on campuses across the United States.

FIRE’s attorneys laid it out simply. This, they argued, was a plain old First Amendment case:

“Students [and NORML ISU leaders] Paul Gerlich and Erin Furleigh, and the more than 500 members of NORML ISU, want to advocate a policy change that is being implemented in a growing number of states – the legalization of marijuana. By policy and practice, however, ISU unlawfully restricts its students’ and faculty’s constitutional right to free expression and it has acted specifically to restrict the Plaintiffs’ rights.”

Gritzner seemed to take particular pleasure in pointing out to university officials that ISU’s trademark office had previously approved designs for groups including Iowa State University Students for Life, an anti-abortion group; ISU College Republicans; Iowa State Democrats; ISU Tea Party; the Navy Marine Corps drill team, which included T-shirts depicting Cy the Cardinal wielding a rifle; the Rifle and Pistol Club; and the ISU Trap and Skeet Club, “including designs with Cy the Cardinal holding a shotgun.” In those instances, Gritzner noted, ISU officials exhibited great confidence in the public’s ability to not confuse Cy’s presence with an official university endorsement of each group’s political position. Neither did they consider the handling of a lethal firearm by an unqualified passerine to fall into the category of a situation “dangerous, harmful or destructive to humans.”

And the evidentiary pièce de résistance: “The Trademark Office,” Gritzner noted, “has approved designs submitted by CUFFS, a sexual bondage student club … to license University marks on their apparel.” In that instance, the judge noted, ISU officials did not believe the licensing ISU trademarks to CUFFS “demonstrated University support for sexual bondage or other expressions of alternative sexuality.”

By the end of Gritzner’s decision, ISU’s arguments were left in tatters. The federal judge ordered university officials to stop “further prohibiting [NORML ISU] from producing licensed apparel on the basis that their designs include the image of a similar cannabis leaf.”

No word yet from Iowa State University officials about whether they intend to appeal the judge’s decision.