What’s the Deal with the 51-Foot Joints Parading Outside the DNC?

As the Democratic National Convention opened on Monday, a band of cannabis activists paraded through the streets of Philadelphia with two enormous 51-foot joints. The massive inflatable J’s became an instant hit on social media thanks to this tweet by a pilot with the Philadelphia Police Department’s aviation unit:

Demonstration or not, definitely not something #TacAir sees everyday. pic.twitter.com/CXpWK1hlUT

So: What’s up with those joints?

The “joints” are actually constructed with thick sheets of clear plastic designed by Cesar Maxit, an Argentinian-born artist who now lives in Washington, D.C. Widely known in the D.C. area for his activist art, Maxit hand-painted the plastic to resemble the emblematic symbol of cannabis.

Hear us clearly now: The joints are not actually filled with cannabis, but, rather, with hot air — not unlike the convention’s political orators. 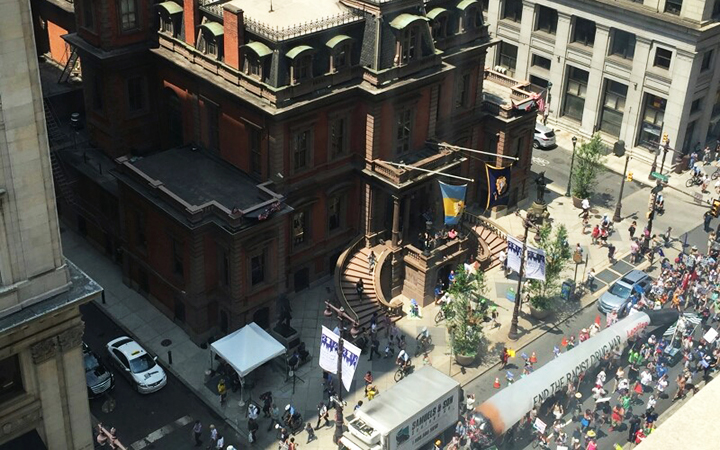 This ain’t the first rodeo for the 51-foot joint carriers, many of whom are members of the D.C.-area activist group DCMJ who traveled to Philadelphia for the convention. They first debuted Maxit’s marijuana art back on April 20, during a march on the White House that ended with acts of civil disobedience — smoking, dabbing, and vaping at 4:20 p.m. — just a few feet from President Obama’s back yard.

Leafly caught up with Nikki Allen Poe, a prominent Philadelphia cannabis activist and comedian who helped lead the procession through downtown yesterday. He gave us the rundown on the response.

“Marijuana is so normalized now that people in this city are so supportive,” Poe said. He described a generally positive reception to the carrying of the two 51-foot joints. “We met with the cops on Friday. We met the police and talked to them about marijuana at the DNC — we sat down with them and we talked about the issues.”

The group led a “jaywalk” on Monday in protest of the DNC and in favor of legalization. One joint carried the slogan, “Berned by the DNC,” referring to the loss of Bernie Sanders as a viable pro-legalization candidate and the underhanded tactics of DNC Chair Debbie Wasserman Schultz, who resigned after WikiLeaks posted internal emails showing the party favoring Hillary Clinton over Sen. Bernie Sanders.

Live from #DNCinPHL: a 51 foot "joint" inscribed with "Berned by the DNC" pic.twitter.com/1fnSPU5X5D

The other joint carries dual messages on each side: “Hillary, Deschedule Cannabis Now,” and “End the Racist Drug War Now.” Both sides are punctuated by the word “Legalize.”

Poe also mentioned upcoming advocacy on the final day of the Democratic National Convention: a “Cannabis Pride” parade that will convene at 3 p.m. on Thursday at South Broad Street and West Oregon Avenue.

“We’re just doing our best to normalize the culture here,” he said. “That’s why we’re doing the Cannabis Pride parade on Thursday. This is a good time. Our movement is moving forward.”