Bailey RahnOctober 18, 2015
Share
Share on Twitter   Share on Facebook
Print
When recreational cannabis laws first began appearing on ballots in 2012, voices frenzied around the topic of underage cannabis consumption. Surely legalization sends a message to kids that it’s okay for them to use cannabis, and surely it would make it easier for them to get their hands on it. Right?

The evidence in national surveys on drug use has been interpreted in a variety of ways by analysts. So what’s really going on, and more importantly, how does this information inform drug policy and education?

How Prevalent Is Underage Cannabis Consumption?

Every year, a survey called Monitoring the Future polls over 40,000 high school students nationwide on their drug consumption habits. Here’s how things have changed since 1996: 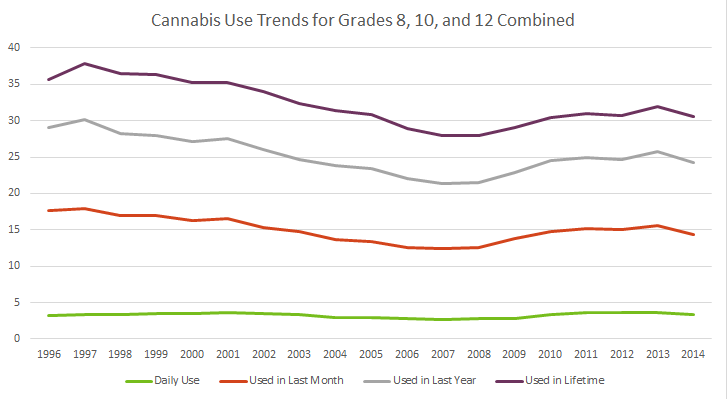 As indicated in the chart, cannabis use among high schoolers took a dip around 2008 and has slowly crept upward in recent years. However, you’ll notice a trend downward again after 2013. Interestingly enough, that’s about when Washington’s and Colorado’s legal recreational cannabis markets debuted.

Colorado and Washington may have been the first states to legalize recreational marijuana, but medical marijuana and decriminalization laws have emerged in dozens of states over the last two decades. Changing attitudes toward cannabis are a necessary precedent for legislative change, so it’s important to keep in mind that data before 2012 recreational laws are still relevant and important. That being said, it’s significant that we’ve seen an overall downward trend since medical marijuana debuted in 1996.

Another notable statistic not represented in the graph is a 6 percent decline in alcohol use since 2002 among 12 to 17 year-olds. Tobacco also fell from just over 15 percent to about 8 percent in the same period.

How Easy Is It for Teens to Get Cannabis?

Have legalization measures made cannabis easier for teenagers to get marijuana? Nope – at least, the teens themselves don’t think so. Since 1975, over 80% of high schoolers have said that cannabis is easy to obtain, and that figure has only dropped in recent years. It isn’t hard for a teenager to find a hook up, and legal outlets with an age gate are only more likely to crush the black market businesses that don’t care if customers are under 21.

States with medical and recreational marijuana laws do see higher rates of teen consumption – they’re 27 percent more like to regularly use cannabis than minors in no-access states. But upon closer inspection, the cause-and-effect evidence isn’t there to support this. As Washington Post’s data and policy analyst Christopher Ingraham puts it:

“Controlling for various individual-level, school-level and state-level risk factors, kids were no more likely to report marijuana use after the enactment of medical marijuana laws than they were before it….In fact, they even observed a statistically significant decrease in use among [eighth] graders after the passage of medical marijuana bills.”

Does Teen Approval Correlate With Cannabis Use?

So if legal access to cannabis isn’t the culprit, could it be the bending attitudes that precede them? We asked Jospeh Palamar, PhD, MPH, from NYU’s Department of Population Health, to shed some light on the connection.

“My colleagues and I found that 10% of high school seniors who had never used marijuana reported intending to try it if legalized,” Palamar says. “However, these are likely the same teens who would eventually try marijuana a year or two down the road the regardless of its legal status.”

Another analysis published in last month’s American Journal of Drug and Alcohol Abuse found that approval rates for cannabis have dropped considerably among students ages 12 to 14, while older respondents (ages 18 to 25) exhibited dramatic rises in approval since 2002. The rate of change percentage is detailed in the chart below. 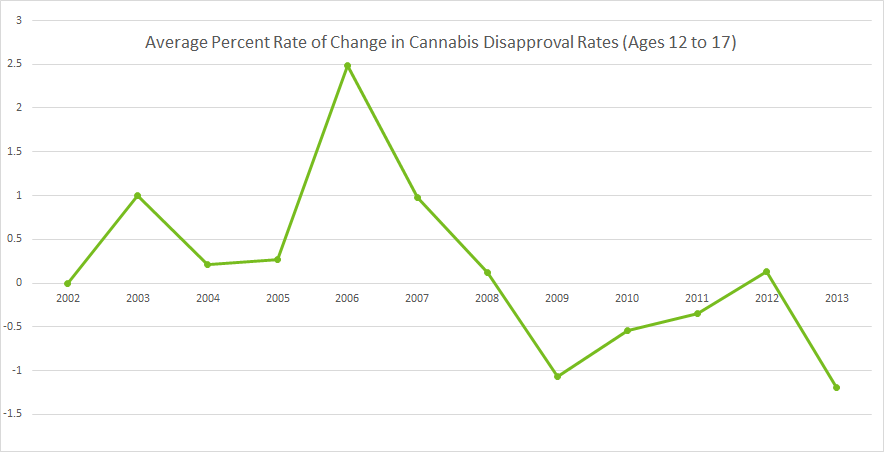 What you’re seeing is a spike in disapproval rates among students age 12 to 17 in 2006, and thereafter approval climbs. Palamar notes, “It’s important to keep in mind that use and positive attitudes toward use appear to precede legalization and not the other way around.” You can see that in the graph — approval rates increase before the passage of recreational cannabis laws in 2012. This observation is echoed by researchers in the 2015 study cited above.

“Put together, our results seemed to suggest that the perceptions and practices of younger adolescents with respect to marijuana have not been negatively impacted by recent marijuana-related changes in public policy and perception. In fact, we observed significant increases in disapproval and decreases in both past year and lifetime marijuana use among this important developmental subgroup.”

How Do We Really Discourage Underage Use?

The cat’s out of the bag and a domino-effect of legalization is already underway, so it’s time to stop blaming policy change for corrupting the youth and really getting to the heart of the problem. The real issue is that marijuana’s adverse effects have historically been dramatically overstated, and at some point, teenagers will catch on to the B.S.

“Exaggerating adverse outcomes associated with marijuana use, in my opinion, is counterproductive, because if teens don’t believe health messages put forth by parents, teachers, and the government, then why should they believe what they hear about other substances?” says Palamar.

Drug education reform is a whole other can of worms, and we’ll have to see what sort of trends arise as recreational laws settle. Until then, all we can do is promote honest conversations supported by science about the impacts of cannabis on younger developing brains.