Bruce BarcottMarch 21, 2018
Share
Share on Twitter   Share on Facebook
Print
From left, House Minority Leader Nancy Pelosi of Calif., Senate Majority Leader Mitch McConnell of Ky., and House Speaker Paul Ryan of Wis., appear for a Congressional Gold Medal Ceremony honoring the Office of Strategic Services in Emancipation Hall on Capitol Hill in Washington, Wednesday, March 21, 2018. (Andrew Harnik/AP)
Update, Thurs., March 22, 10am PDT: The House has passed the spending measure on a vote of 256-167. The measure now moves on to the Senate.

Seeking to avert another government shutdown at midnight Friday, Congressional leaders on Wednesday struck a deal on a $1.3 trillion spending bill that would keep the federal government open through September.

The spending bill must pass by late Friday night in order to avert a federal government shutdown.

That measure includes the Rohrabacher-Blumenauer amendment, which prevents the Department of Justice and its agencies, including the Drug Enforcement Administration, from spending any money to undermine or interfere with state-legal medical cannabis programs.

Rep. Sessions’ move came after Attorney General Jeff Sessions (no relation) sent a letter to Congressional leaders asking them to remove the medical marijuana protections. The AG’s letter stated: “I believe it would be unwise for Congress to restrict the discretion of the Department to fund particular prosecutions, particularly in the midst of a historic drug epidemic and potentially long-term uptick in violent crime.”

Still Must Be Passed & Signed

“Glad to see it in,” Rep. Earl Blumenauer (D-OR) said on his Twitter feed on Wednesday evening. “Next time we’ll get more.”

Blumenauer elaborated in a media statement on Thursday morning:

“While I’m glad that our medical marijuana protections are included, there is nothing to celebrate since Congress only maintained the status quo. These protections have been law since 2014. This matter should be settled once and for all. Poll after poll shows that the majority of Americans, across every party, strongly favor the right to use medical marijuana.

“Instead, Attorney General Jeff Sessions is doubling down on the failed War on Drugs and Republican leadership in Congress—led by Chairman Pete Sessions—is stonewalling. They’re ignoring the will of the American people by blocking protections for state adult-use laws and cannabis banking. They even refused our veterans access to lifesaving medicine.

“Republican leadership is hopelessly out of touch, and they should be held accountable. I will not rest until Congress gets this right.”

The White House says President Donald Trump will sign the $1.3 trillion budget bill that boosts military spending, but does not include all the funding he sought for his promised border wall.

White House officials say the plan includes key administration priorities, particularly defense spending. They argue they could not get everything they want because Democratic votes are needed in the closely divided Senate.

Budget Director Mick Mulvaney said the bill was not perfect, but “that’s not how the process works.”

He noted the deal includes at least some money for new construction along the border.

Trump sounded less than enthused by the bill Wednesday night. He tweeted: “Had to waste money on Dem giveaways in order to take care of military pay increase and new equipment.”

The full text of the medical marijuana amendment, as it stands in the current spending bill, appears below. 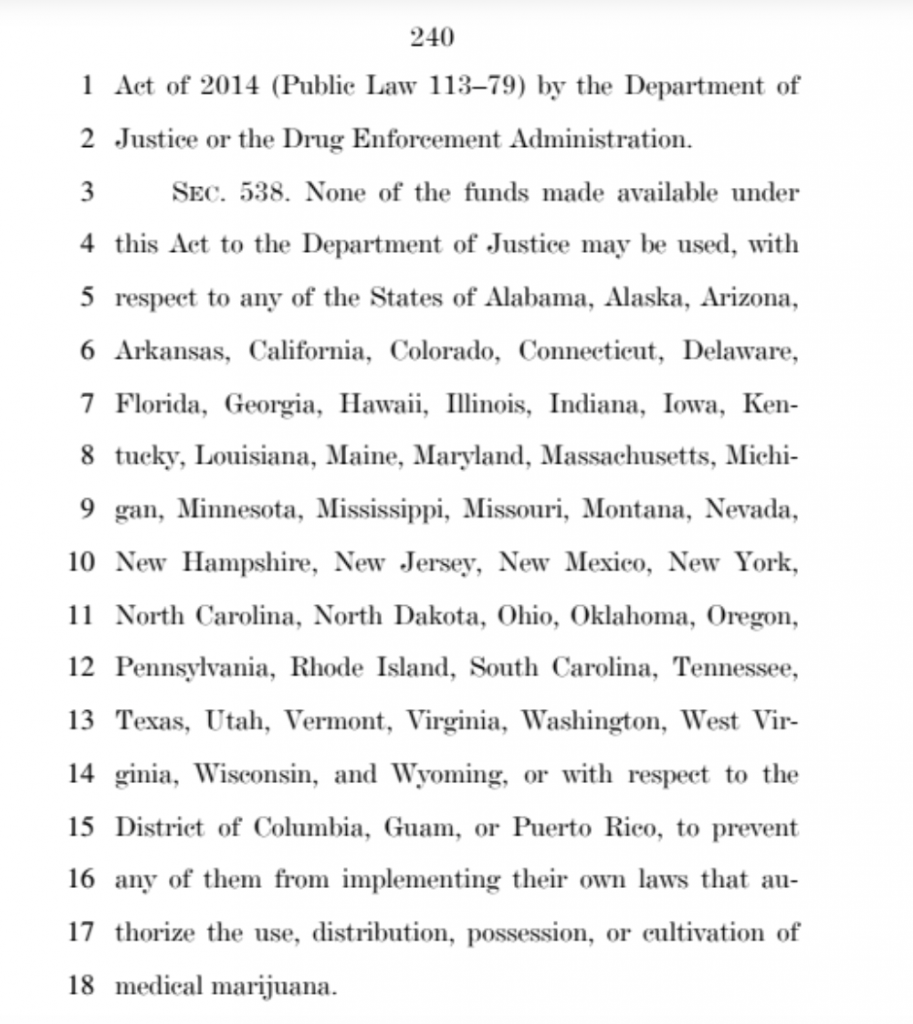 Politics
Election 2020: Cannabis legalization on the ballot
Politics
Interstate compacts could allow regional cannabis trade to flourish
Politics
As legalization heads to the ballot, Arizona mourns a leader
Politics
Drugs and the rituals of pleasure in a pandemic