With their billboard in Yakima, Washington, drawing all the wrong kinds of attention, public health officials in Washington state find themselves in an all-too familiar position: apologizing for a tone-deaf anti-drug ad.

This anti-marijuana billboard in Yakima was paid for by the WA Department of Health. Some find it, well, offensive. pic.twitter.com/NbnoJ5Cw7f

Officials with the Washington State Department of Health created the ad to reach teens in Yakima, a town with a large Latino population. The problem? Its tagline —“We’re Hispanics…we’re cool by default” — falls into the trap of racial stereotyping. Hispanics are not “cool by default.” People of certain ethnic backgrounds are not all smart, or excellent athletes, or good cooks, or…whatever. It’s a “positive stereotype,” I know. Just stop.

After explainogizing yesterday, department officials said they’ll be taking down the billboard a few days early.

“It’s distracting really from our ability to do what we intended — which was to try to reach youth with messages that would resonate with them,” Health Department spokeswoman Julie Graham told the Yakima Herald. “It was due to come down Friday anyway.”

Here at Leafly, we see a lot of material aimed at keeping cannabis out of the hands of minors. It’s a goal we share. The amount of lameness that passes our desks, though, is astonishing. It is really, really difficult to create a compelling campaign to discourage underage use.

Here are some of the best and the worst we’ve seen. Full respect to the creatives who made the good ones.

With its “Stay True to You” campaign, Oregon’s state health agency created a youth cannabis prevention campaign that was not entirely embarrassing. That’s man-bites-dog stuff.

The $4 million campaign, funded by state cannabis tax revenue, used a combination of adult testimonials, facts about teen brain development, and warnings that younger siblings will emulate their older brothers and sisters. You can watch a couple examples here and here.

Oregon Health Authority (OHA) officials shaped the messages based on focus groups conducted among youth and adults 14 to 20 years old in a number of cities around the state.

“Young people in our focus groups related to the idea that being a teenager is hard,” said Kati Moseley, OHA policy specialist. “Young people recognize that marijuana has the potential to affect their present and their future. We used this insight to develop an approach that speaks to youth on many levels.”

In one of the most affecting videos, a 41-year-old named Francisco recalls an old teenage friend whose skateboarding ambitions dissipated because of cannabis use. Francisco doesn’t preach and he doesn’t claim weed will kill you. He just says: “You don’t want this to become a priority in your life, to where you put your hopes and dreams and your future at risk because you just want to sit around and get high.” 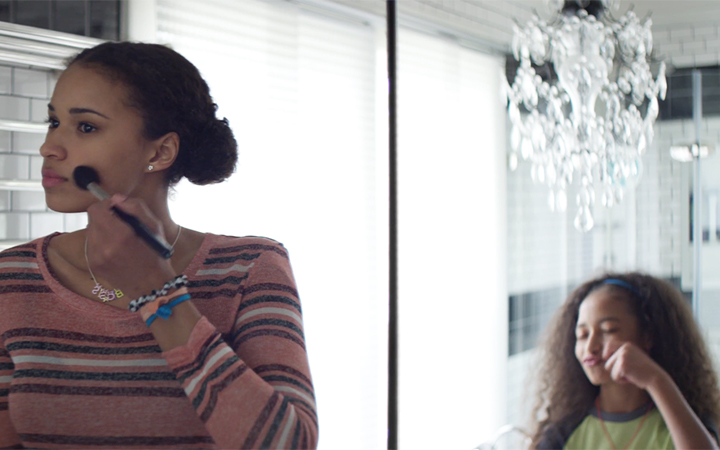 The spots aren’t all up to Francisco’s quality. One of the most cringeworthy features a teen skater dropping in, with the tag line “Pot can make it harder to learn new tricks.” It looks like a church youth group leader’s idea of a “cool kid” doing a “rad sport.”

One of Oregon’s new ads designed to prevent underage cannabis use. There’s no question: That kid is the coolest. Image via Oregon Health Authority

Look, we get it: This is a tough campaign to produce. OHA is genuinely trying to reach teenagers, but 99 percent of adults suck at “getting real” with teens, and OHA is a government agency so it can’t offend anyone. Good luck with that.

In states that have legalized the adult use of cannabis, public service campaigns warning minors away from marijuana use have actually improved. After stumbling badly with its infamous “Don’t Be a Lab Rat” campaign in 2014, Colorado scrapped the old scared-straight formula and created the much-closer-to-sane “Good To Know” campaign, which tries to lead minors to actual facts about cannabis. With its 2016 effort, Oregon followed Colorado’s lead, dropping the scare stories and treating cannabis with a more rational approach. It wasn’t perfect, but we’ve seen a lot worse.

In fact, here are a few of the worst ones we’ve seen:

Ahh, Stoner Sloth. The modern classic. An instant viral sensation when it came out last year, this Aussie PSA just gets better with age. “Jesse … could you pass the salt please, darling?”

Colorado state officials were so passionate about waving kids away from the state’s new adult-use cannabis industry that they created actual human-size cages and placed them on campuses and public parks. (Jokers, of course, proceeded to take selfies of themselves and their friends partaking in and around the cages.)

Opponents of Florida’s 2014 medical marijuana amendment cooked up that question as part of their campaign to torpedo MMJ in the Sunshine State.

Stephen Harper’s Conservative government came up with this anti-cannabis ad that claimed “the science is clear” that cannabis caused health damage and shouldn’t be considered medicine — even as his own agency, Health Canada, was licensing growers to provide medical cannabis to patients. The ad was so hated that the Huffington Post headlined a story about it, “Harper Government’s Marijuana Ad Is Being Disliked to Hell.” The government quietly removed the ad from YouTube.

In one of the last anti-drug ads put out by the Bush administration, a teenage girl describes her friend, sitting on the couch, who has apparently flattened like a balloon because of her cannabis use. As writer Dominic Holden observed at the time, this ad wasn’t merely creepy. It dehumanized all cannabis users. The girl’s smoking, Holden wrote, “has literally deflated her into a non-person.”

Not sure what the takeaway was meant to be here. If smoking cannabis lets you chat with your dog, isn’t that actually an incentive?

The original and still best/worst: This all-star cast (Paul Newman! Bob Hope! Cathy Lee Crosby! Robby Benson! Google him!) came together in 1981 to sing — we use the word loosely — one of the worst songs ever written. The producer, notorious bad boy Robert Evans, made the spot as part of his public service sentence for, yes, a cocaine conviction.

Can’t get enough? Here’s a whole reel of the worst anti-drug ads ever made. Enjoy.