Selecting a Cannabis Phenotype: How to Get the Best Version of Your Strain

Pat GogginsJanuary 18, 2019
Share
Share on Twitter   Share on Facebook
Print
(Nastasic/iStock)
Ever wonder why the same strain of cannabis can be slightly different, depending on which store you get it at? A gram of OG Kush from one grower who sells to a particular dispensary will be slightly different from another grower’s OG Kush at the dispensary across town. Although they are the same strain, these are different phenotypes (or “phenos”)—different expressions of the same genetic material.

Cannabis Genotypes and Phenotypes: What Makes a Strain Unique?

When a grower decides to produce a particular strain, they typically get a packet of seeds from a breeder, each one a different phenotype of that strain. After growing each seed, the grower will pick the best one because of its characteristics, picking for yield, bud density, smell, flavor, potency, color, and many more attributes, and discard the others.

This narrowing process usually takes a few generations of selection, and months, sometimes years, but in the end, the best pick will be mass produced for sale, and that’s the cannabis you buy off the shelf at the dispensary.

The Importance of Labeling 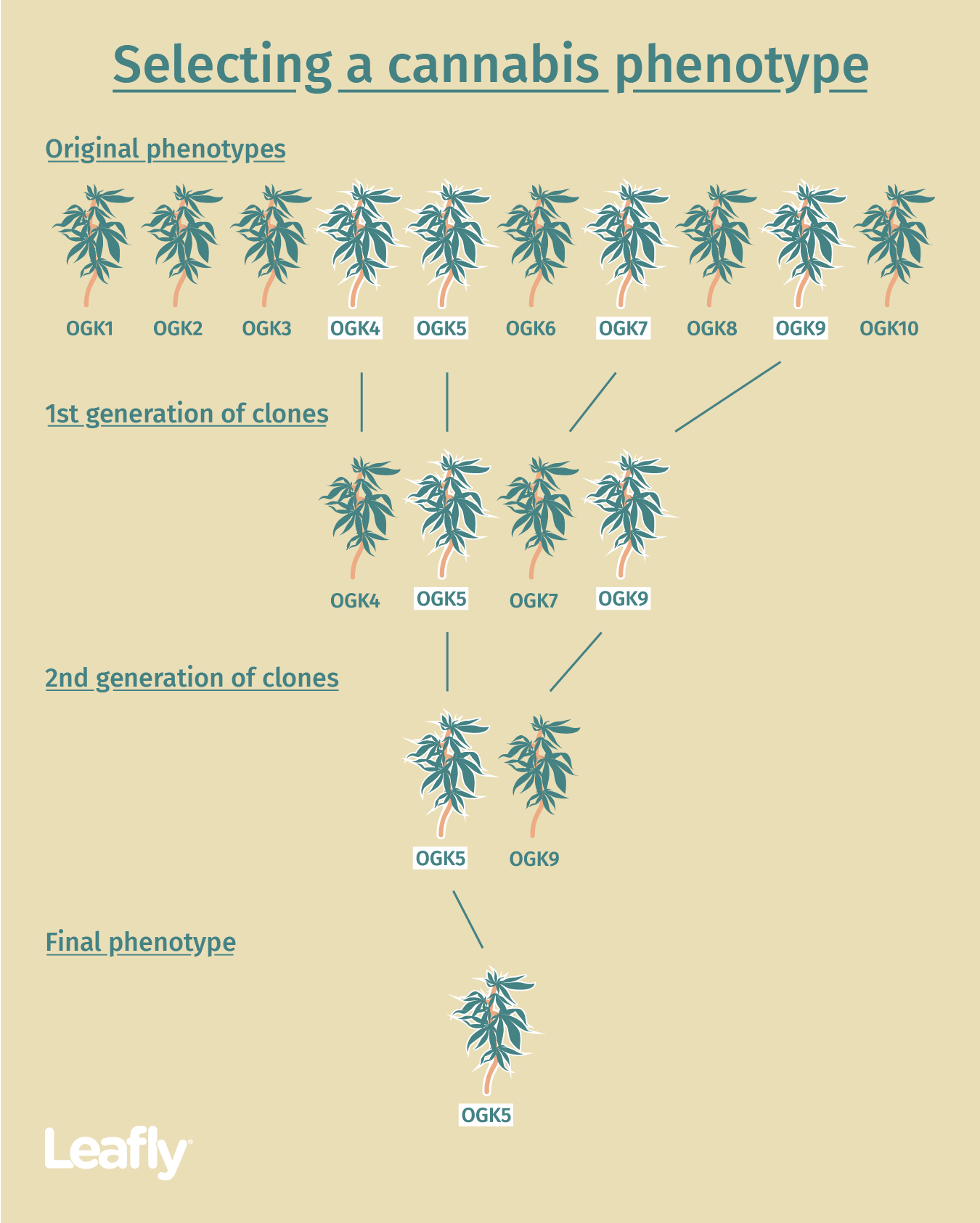 An example of the phenotype selection process. Growers typically mark and number each phenotype for tracking purposes. In this case, a grower is selecting OG Kush (OGK) phenotypes. Click to enlarge. (Elysse Feigenblatt/Leafly)

Selecting phenos is a meticulous process. Organization and keeping track of things through the long growing process is imperative. You’ll be taking clones of each phenotype and keeping some while discarding others, so it’s important to label clones according to their originals phenos and to not mix up any.

To start, plant all of your seeds and label each one with a separate tag. So if you’re growing 10 phenos of OG Kush, you would assign them “OGK 1,” “OGK 2,” etc., up to “OGK 10.” The order of the numbering doesn’t matter, but make sure that a number always stays with the pheno you assign it to.

Grow out each seed until they are 6-12” tall, or big enough to clone. This will probably take about 3-6 weeks.

Take a clone of each phenotype and number each clone to its corresponding original: the clone of “OGK 1” would also be named “OGK 1” and so on.

If you’re starting out with ten seeds, you should now have 20 plants: 10 seedlings and 10 clones.

After you have taken clones, grow them separately in a vegetative state. When the original phenos are big enough, after at least 2 months in the vegetative state, put them on a flowering light cycle (12 hours of dark, 12 of light).

After about 8-10 weeks of flowering, these original phenos will be ready to harvest for buds. Some phenotypes might finish sooner than others and each will probably be slightly different. Now you will discard some of the phenos based on their poor quality and keep the ones that have good qualities.

A lot of seeds come pre-feminized, but if you are starting out with male and female seeds, you will need to determine the sex of the plants first and discard all of the males, because only females produce buds. Reproductive organs appear a couple weeks into the flowering cycle, and if you have any males, discard them and their corresponding clones and keep flowering the females.

Cannabis anatomy: The parts of the plant

When harvesting each phenotype, take meticulous notes of each pheno’s bud structure, yield, smell, density, and overall appearance. Some phenos can be discarded right away, as it will be easy to tell that they won’t produce quality buds. Whenever you discard a pheno, discard its corresponding clone that’s in the vegetative state.

You can still use the harvested buds from discarded phenos. This product may not be as desirable because it’s from the phenos that didn’t make the cut, but a lot of growers will sell this for pre-rolls or extracts, just usually not quality flower.

This first generation should be big enough to flip into flower now because they were growing vegetatively while the original phenos were flowering. But you can always grow these out more vegetatively if you want bigger plants.

After flowering these four remaining phenos, harvest them and take more notes. Discard the ones with poor qualities and their corresponding clones and keep the ones with good qualities.

Continue this process until you’re down to one pheno. That is your winner!

You don’t want to discard a pheno with possible good qualities, but keep in mind that the less you discard, the more rounds of cloning, flowering, and discarding you’ll have to do.

Often, commercial growers will go through at least three rounds of generations of this selection process to get the final pheno, sometimes even more.

You can see how this is a time-consuming process. Three generations of flowering phenotypes, if each round takes about 8-10 weeks, is 24-30 weeks alone. Add on top of that another month or so for the seeds to germinate and get to an initial size in which to clone off of at the beginning of the process, plus time to harvest, dry, and cure buds at the end.

So before that OG Kush from your favorite grower hits the shelves for the first time, they have been growing and narrowing it down for 7-9 months at least, to get you the best version of that OG Kush. That phenotype is now their “cut” of that strain. 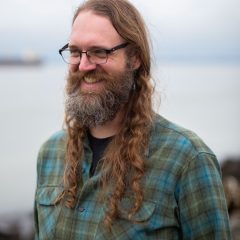 Pat Goggins is an editor at Leafly, specializing in cannabis cultivation after working for a commercial grower in Oregon for two years. When not fixing typos, you’ll probably find him on a boat or in the mountains.