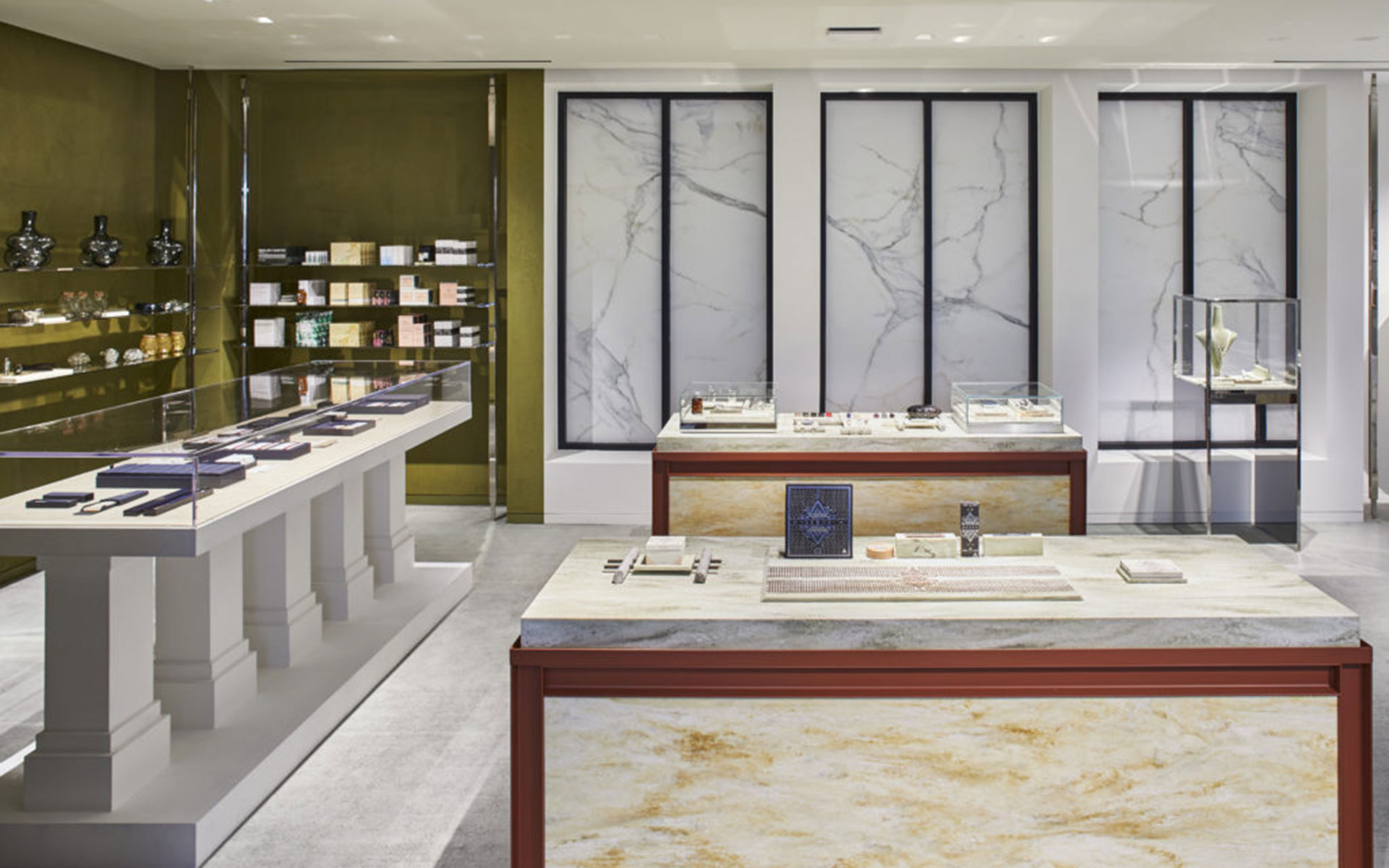 Luxury cannabis products at Barneys department store. (Courtesy of Barneys/The Window)
Luxury cannabis is not just a concept anymore, it’s taking up physical space in some of the bougiest establishments. It’s jarring to see Saks Fifth Avenue’s in-house salon in Manhattan stocked with high-end CBD and Barneys in Los Angeles armed with a cannabis retail wing when people are still getting locked up in prohibition states. But the demand for luxury cannabis only seems to increase even as justice stagnates.

It’s not that the millions of people purchasing legal cannabis don’t care about the harms of continued prohibition—many seem to. A market for cannabis products that achieve a subjective luxury status has always been desirable to consumers, a hallmark of capitalist supply and demand.

New dimensions open up all the time: Tech is created, design deployed, and true innovation becomes possible. But what exactly is luxury, designer cannabis, besides potent, high quality flower and its many derivatives?

Leafly asked industry veterans, organizers, and some of the most sought after cultivators what luxury cannabis means right now and what it could look like on the path to normalization.

What Even Is Luxury Cannabis?

A consensus may be unlikely, but many cite superior potency and clean cultivation as the first markers of a quality, luxury product. Emma Chasen, a consultant and cannabis educator with Eminent Consulting, says of high end cannabis: “Corners are never cut in production efforts, nor quality and cost of inputs and equipment. Luxury cannabis also has a diverse set of compounds within its matrix—prized, rare genetics that may express a heightened CBG concentration or an extraordinarily dominant nerolidol [a terpene] concentration, for example.”

After growing perfect buds, further steps must be taken to separate from the pack—other elements such as high design and cultural context must also be present to be considered luxury.

That’s quite a few boxes to tick, but unlike traditional luxury goods, cannabis’ availability is limited, creating a different value structure that rests on reputation more heavily than with other products. With cannabis there is much less physical stock available, and like vintage wines, they are finite, which can increase demand and prestige if a cultivator is consistent.

The legacy grower who has progressed from medical to recreational cultivation has an edge—longer operating times and familiarity can go a long way in an industry with little advertisement opportunities.

Master cultivator and CEO of Sherbinksis, Mario Guzman, is no stranger to the power of the shout-out. Through potent flower and bold branding, his Gelato strain has risen to such prominence that it’s on the shortlist at Barneys’ The High End boutique in ever-bourgeois Beverly Hills.

This partnership was intentional, as Guzman likens his popular-with-rappers strains to designer garments. “Think about designer cannabis the same way you think of a fashion designer. Their label is a fashion house. The designer surrounds him or herself with the world’s finest seamstresses, sourcing teams, merchandisers, all working toward one common goal: to deliver the best,” he says.

Though cannabis may not be in TV commercials, it’s been promoted via other cultural means for as long as it has been prohibited. Jazz musicians and later rock and hip-hop artists embraced the herb as a creativity booster, and in the case of rap, as a status symbol, akin to Versace silks and Veuve Clicquot champagne.

Think about designer cannabis the same way you think of a fashion designer. Their label is a fashion house.
Mario Guzman, Master Cultivator and CEO of Sherbinskis

“Hip-hop music has told the rags-to-riches story for so many years. Rappers love nice things, the finer things in life; having the best cannabis is no exception,” says Guzman.

Millennials in particular are natural advertisers, posing with products on social media feeds with little qualms, and acquiring what the stars want hasn’t gone out of fashion. A smart cannabis purveyor knows this and uses the same principles of luxury branding and positioning to get it in consumer’s hands.

Social Equity Needs to Be a Hallmark of True Luxury

Oftentimes luxury brands tout equity and sustainability, but how does this apply to the cannabis industry? Without the blood, sweat, tears, and years stolen of the everyday street corner seller, the work of countless advocates and activists, and the bygone era of queer advocacy that helped to bring cannabis to this point, how could luxury cannabis even exist?

For brands that don’t practice a higher level of service involving direct reinvestment in communities of color, or who don’t steward the environment, the word luxury is a complete farce. All currently legal, consequence-free cannabis consumption is a luxury that a majority of Americans can’t afford.

“Thinking fancy is white is the problem. Fancy and luxury is intersectional—it’s just our current white-washed systems that lead us to believe otherwise.”
Solonje Burnett, co-creator, Humble Bloom

According to Swatosh, brands must “Value the future of humanity—meaning it needs to be sustainable, which also includes attainable.”

She continued that brands trying to create a truly rare cannabis experience should “Use their marketing power and status to help cultivate a new narrative for society, one stripped of ego and fear of the other, using cannabis as the common thread to bring diverse perspectives together who value the need for community.”

Co-founder Solonje Burnett is clear about what is expected of anyone seeking to occupy the space with authenticity and due care: “Luxury brands need to represent, hire, and contribute to those most affected by prohibition and criminalization—read: Black and Brown communities. When I say ‘hire,’ I mean in leadership and decision-making positions. Contribute means reparative programs and givebacks. A percentage of sales earmarked for organizations like National Bail Out, Drug Policy Alliance, or Cage-Free Repair are a couple of examples.”

Brands have always counted on black dollars, and Burnett reminds us of how potent this spending power is, as well as its cultural weight. “Thinking fancy is white is the problem. Fancy and luxury is intersectional—it’s just our current white-washed systems that lead us to believe otherwise.”

Burnett continues: “Moving past the stereotypical hip-hop dude dripping in diamonds—no offense to them though—would be ideal. We need more representation in the lux canna space. What if luxury cannabis brands were more Whoopi Goldberg or Serena Williams—wish she would. Imagine the buy-in. Those women speak to me.”

What Does This Mean for the Future of Cannabis?

Just like federal legalization, the changes are slow going. Eminent Consulting’s Emma Chasen thinks there is space for change and good in the coming days.

She says: “Luxury and activism are not mutually exclusive. Everyone deserves to have access to high quality cannabis and a lot of the work being done ensures all people get to enjoy luxury goods and participate in this burgeoning industry, especially the marginalized communities that have been destabilized because of the war on drugs.”

Legacy cultivators A Golden State are a good example of incorporating a few of these progressive ideals into luxury cannabis. The brand is using Mount Shasta ice-melt water and certified hydroelectric-sourced electricity, and charges a pretty penny for the outcome at $70 per sparkling, pristine eighth.

Legalization Isn’t Enough: 10 Things Every New Cannabis Law Must Have

For social advocacy, we’ll be keeping an eye out for Caliva’s roll-out of policies developed in partnership with Jay-Z, as they plan to educate and hire the formerly incarcerated.

All in all, there won’t be any stopping the tide of luxury cannabis products, we’re only just standing at the edge of the vast ocean. Cities known for luxury like Miami and New York City have not even come up to the plate yet, and who knows what kind of excellent terroir hides in the hollers of West Virginia and the mountains of Montana. American cannabis on the whole has yet to be defined and the concept of luxury along with it.

Growing beautiful flower won’t be the hard part, and if activists succeed, even the Most Expensivest on offer will be restorative and represent all cannabis consumers, not just the wealthy white ones lucky enough to be in legal states. 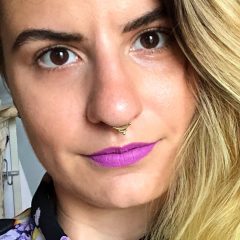 Hailing from New York, Danielle Guercio is an artist and writer, as well as a medical cannabis patient and advocate. Her Sicilian-American background instilled in her a passion for culture that drives her storytelling to a place of community-building and solidarity—as well as to life’s many indulgences. 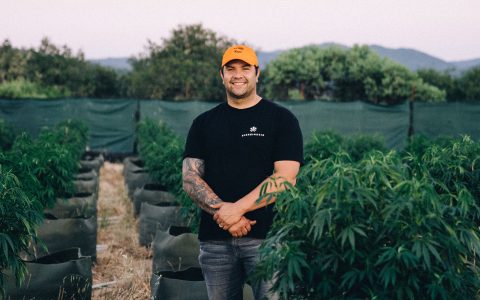 Podcasts
What Are You Smoking, episode 79: Mr. Sherbinski