National Music Promoters Want a Slice of the Cannabis Pie 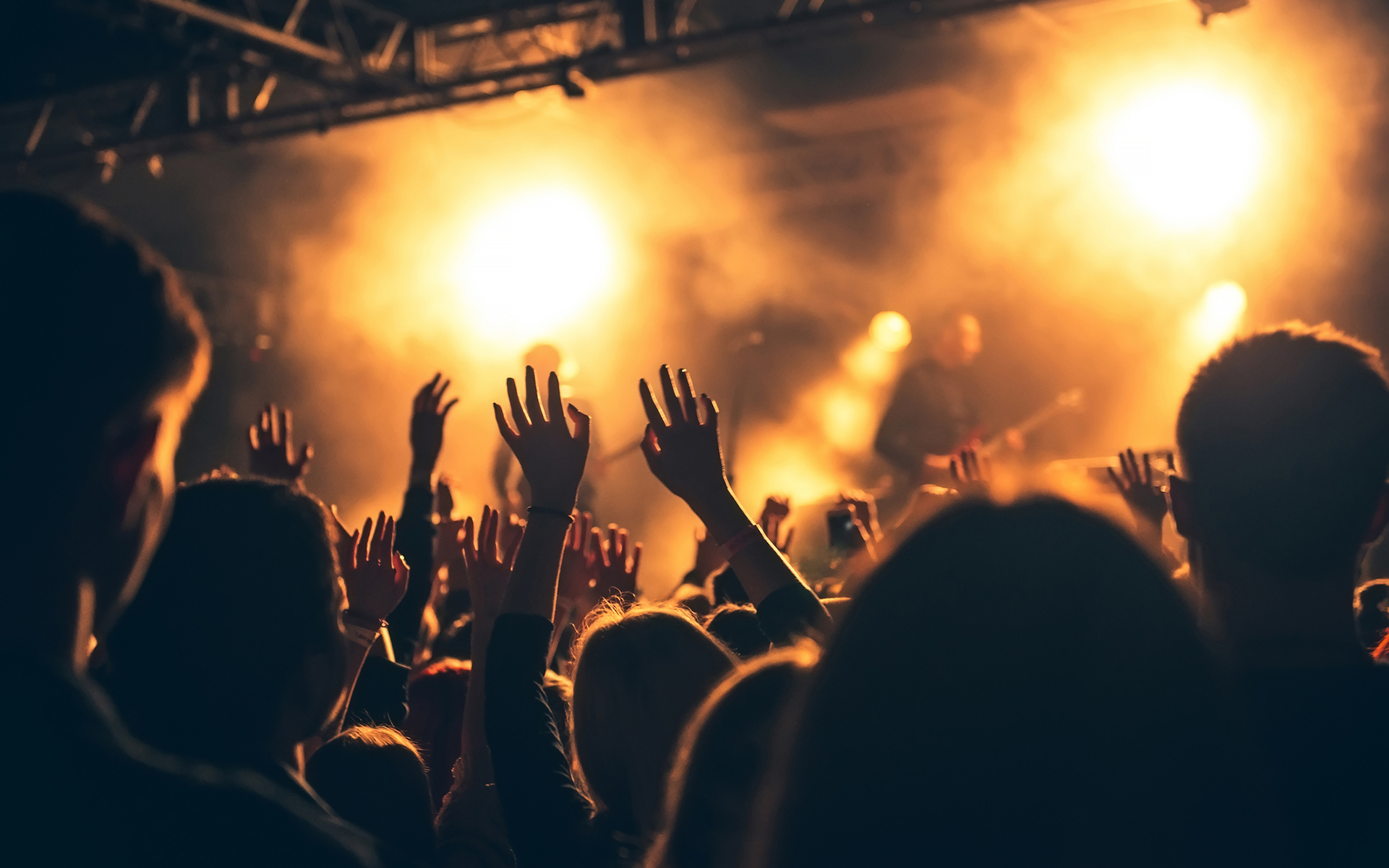 (dannikonov/iStock)
The success of last weekend’s Sacramento Cannabis Cup, California’s first event with state-licensed cannabis sales and onsite consumption, has led music promoters to look ahead to a future of 420-friendly music festivals and single-act concerts. Just as merch sales have become an important revenue stream, promoters and talent managers are looking to capture cannabis sales as a way to monetize the music.

Not only was the High Times Cannabis Cup in Sacramento the first festival in the United States to feature taxed sales and open consumption of the botanical intoxicant, Friday and Saturday’s concerts were the first in America at which smoking cannabis violated no rules.

'Music and cannabis have a deep history. One feeds the other. You're just giving the audience what it wants.'
Jim Lewi, Red Light Management

“Cannabis and music go together hand-in-glove,” High Times’ chief revenue officer, Matt Stang, told Leafly shortly before the first waft of cannabis smoke—and some of the biggest names in hip-hop—hit the concert stage on Friday.

“Cannabis is coming into the music industry,” added Stang. His company, the longest-running brand in the cannabis industry, bridges cannabis culture and the music business in the pages of its magazine and in the lineup of hip-hop, reggae and electronic artists at its Cannabis Cup events. “As legality scales out, there’ll be a lot happening.”

Stang will join a panel of music and cannabis industry executives convening at Music Biz in Nashville later this month (May 14-17). The topic: cannabis as a new revenue stream for artists, labels and festival and concert organizers. 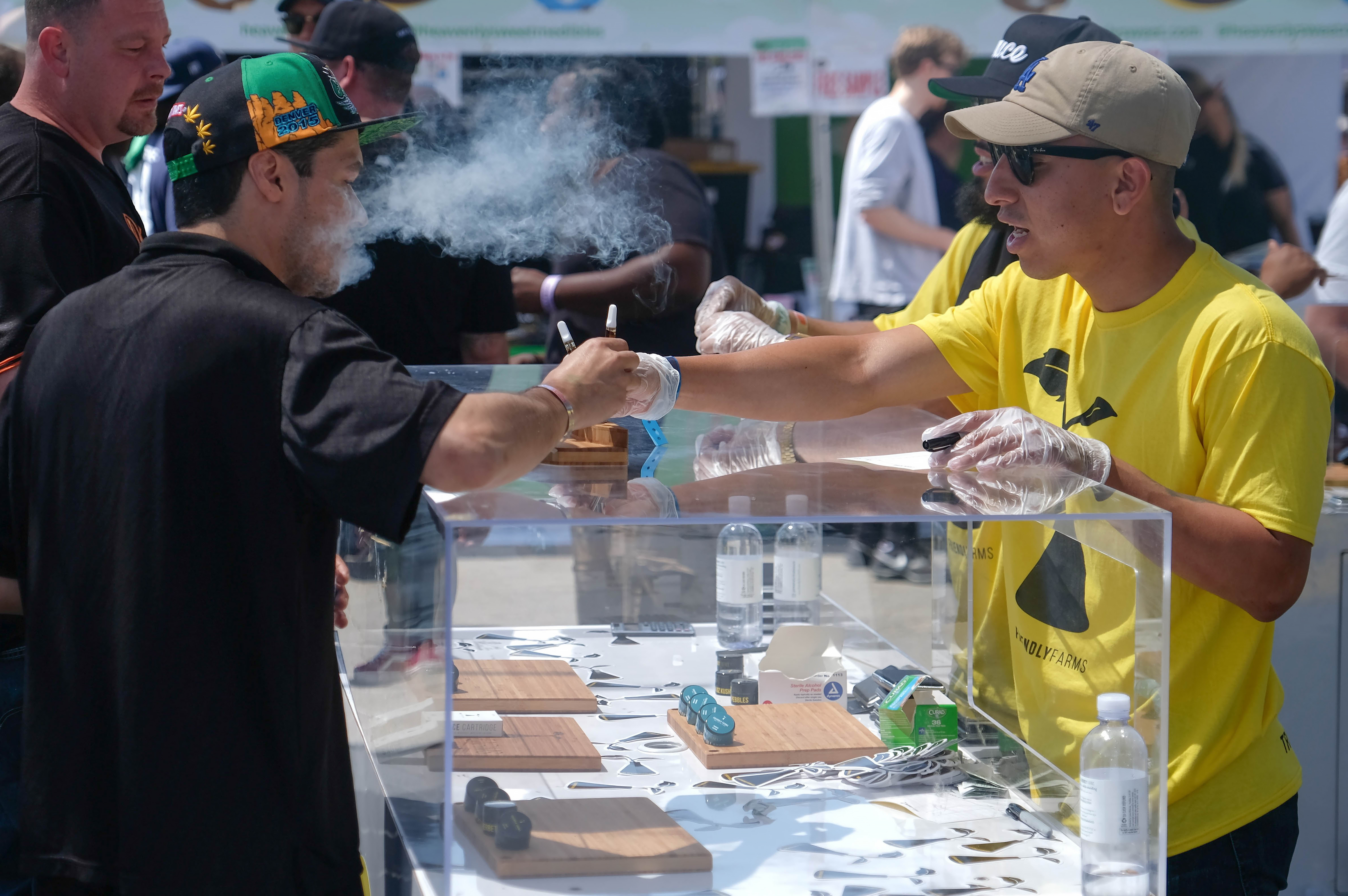 Last weekend’s Cannabis Cup in Sacramento was the first to feature state-licensed cannabis sales and open consumption. It’s likely to be the first of many, and music promoters want a piece of the action. (Kurt Hegre for Leafly)

This Is Not Not Happening

Tim Blake, the cannabis grower who became an event producer when he founded Northern California’s annual Emerald Cup festival 15 years ago, told Leafly it’s a matter of when, not if.

'The big event producers want a piece of it, just like the beer garden.'
Tim Blake, founder of the Emerald Cup

“All the big event producers are all talking about how much business cannabis has done on the streets outside their events all these years,” Blake said. “Now they would like to have a piece of it, just like the beer garden.”

A number of well-known artists are already in the game. Willie Nelson and Snoop Dogg have their own cannabis companies, with products ready to sell in place of alcohol at California concerts. Last year the Tragically Hip, Canada’s iconic band, struck a deal with Newstrike, a Canadian cannabis company, that wasn’t about the endorsement fee. The Hip actually took an investment stake in the company.

More big music industry players are waiting in the wings for their share of cannabis sales, sponsorships and licensing deals.

“I was getting a lot of calls from people I knew in the cannabis industry, whether it was glass-blowers I worked with in concert tours for years, or others I knew personally, asking about working together,” said Jim Lewi, an industry veteran and Red Light Management executive. 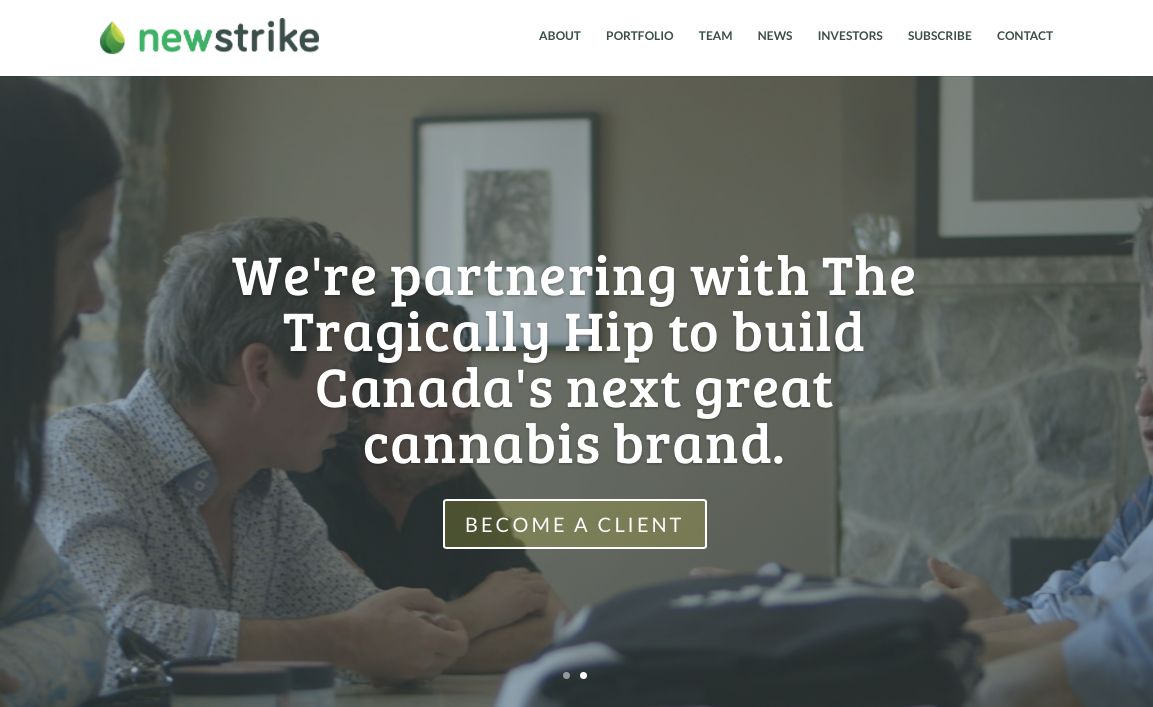 The Tragically Hip invested in Newstrike, a Canadian cannabis producer.

The company’s cannabis projects continue to expand. Last month, Red Light Management’s owner, Coran Capshaw, extended his partnership with the Emerald Cup. Capshaw’s Starr Hill Presents, a concert promoter that works with big music and arts festivals like Bonaroo, Outside Lands and South by Southwest, recently partnered with Northern Nights, a small dance-music festival that takes place every July along the Eel River in the heart of the Emerald Triangle.

High Times is best known as a magazine publisher, but for years now the bulk of the company’s revenue has come from its Cannabis Cup events. Now it’s looking to expand beyond its own well-established Cup brand. High Times recently partnered with Reggae on the River, an annual August music festival a couple of miles upstream from Northern Nights.

Cannabis can’t be legally sold or consumed—yet—at Northern Nights or Reggae on the River. In years past, before legalization, Northern Nights featured a fenced-off cannabis farmers market and glampout smoking lounge. Event organizers justified these areas under Prop. 215, California’s 1996 initiative that legalized medicinal cannabis. Cannabis use has long been tolerated at Reggae on the River, though  illicit sales have been frowned upon.

With the success of last weekend’s legally permitted Cannabis Cup in Sacramento, which featured onsite cannabis sales and open consumption, the door might now be open for state-licensed sales and enjoyment at Northern Nights and Reggae on the River.

Red Light executive Jim Lewi said his company’s expanding partnership with the Emerald Cup represents an opportunity to learn the workings of events attended by and marketed to consumers of both music and cannabis.

“We’re looking to work with people who could get us into the business of cannabis events and position ourselves with the people who follow the law,” Lewi said.

Jim Lewi doesn’t just manage some of today’s top acts. He’s got a hand in shaping the future, too. As the organizer of Aspen Live, the 22-year-old think-tank known as Sundance for the music industry, Lewi last year launched Aspen High Summit, a gathering of high-powered music and cannabis tribes that for three days in December discussed cannabis sales, consumption, politics, corporate responsibility, and other matters that lobbyists and lawmakers will have to address before concert-goers can legally flick Bics on pre-rolled joints in arenas, stadiums or concert halls.

“We talked a lot about it,” Lewi told Leafly. “We had concert people. We had cannabis people. We had conversations about what was coming in California law, and how you’re going to see concert promoters getting into cannabis sales at their shows.”

Cannabis use has been widespead and common at concerts since the 1960s, of course. Its presence has often been a sticky subject with local law enforcement. In the new era of state-legal sales, what was previously a pain point for concert promoters is expected to become a lucrative profit point.

If there’s one thing that will slow down the opening of cannabis booths at music venues, it’s a little-known bug in California law.

Currently, events with licensed cannabis sales and onsite consumption may be held only at state-administered county fairgounds and agricultural district properties.

That wasn’t part of the original Proposition 64 language, but it emerged as a little-noticed detail in Gov. Jerry Brown’s rider bill consolidating California’s recreational and medicinal cannabis laws. That bill was adopted in 2017.

Venues built for harvest fairs, horse racing and midway carnivals like Santa Rosa’s Sonoma County Fairgrounds, where the Emeald Cup drew 30,000 people last year, work for outdoor festivals but not so much for single-artist concerts. “They are not very comfortable,” Lewi said, tactfully.

A Solution in Sacramento

That could change, though. A bill in the California state Assembly, sponsored by state Rep. Bill Quirk (D-Hayward), would allow cannabis events and festivals to be held in any venue willing to host one, with local city or county approval. His AB 2020 sailed through committee but faces some opposition.

California’s cannabis czar, Lori Ajax, chief of the state’s Bureau of Cannabis Control, has said that she can see a time when cannabis-friendly concerts could be staged at the Hollywood Bowl, the Greek Theaters in Los Angeles and Berkeley, and even the Empire Polo Club in Indio (if the owner of the Coachella Festival would ever stop hating cannabis).

Last weekend’s first state-licensed cannabis-and-music event was largely deemed a success, but state regulators still have not permitted another show. The High Times NorCal Cannabis Cup is scheduled for June 2-3 in Santa Rosa, but it awaits the city’s approval—which is required before the state can sign off.

Lewi said that Red Light Management and Starr Hill Presents are working to stage concerts and festivals featuring cannabis sales and consumption in California venues beyond just fairgrounds in 2019.

“Music and cannabis have a very deep history,” Lewi told Leafly. “One feeds the other, and you want both. You’re really just giving the audience what it wants.”