Last night was a quiet winter evening at NuWu Cannabis Marketplace, one of Las Vegas’ largest dispensaries. The store sees an average of about 3,000 shoppers a day, but only about 20 were walking the floor of the massive 15,800-foot retail space just after 5 p.m. Friday, as history was being made.

In a back room, Los Angeles restauranteur Brandon Hawkins stood with $11,000 cash, made of six rubber band-held stacks of $20 bills.

Hawkins, 36, had flown in from LA earlier that day to make perhaps the largest legal purchase of a cannabis product to date in the United States: the Leira Cannagar. 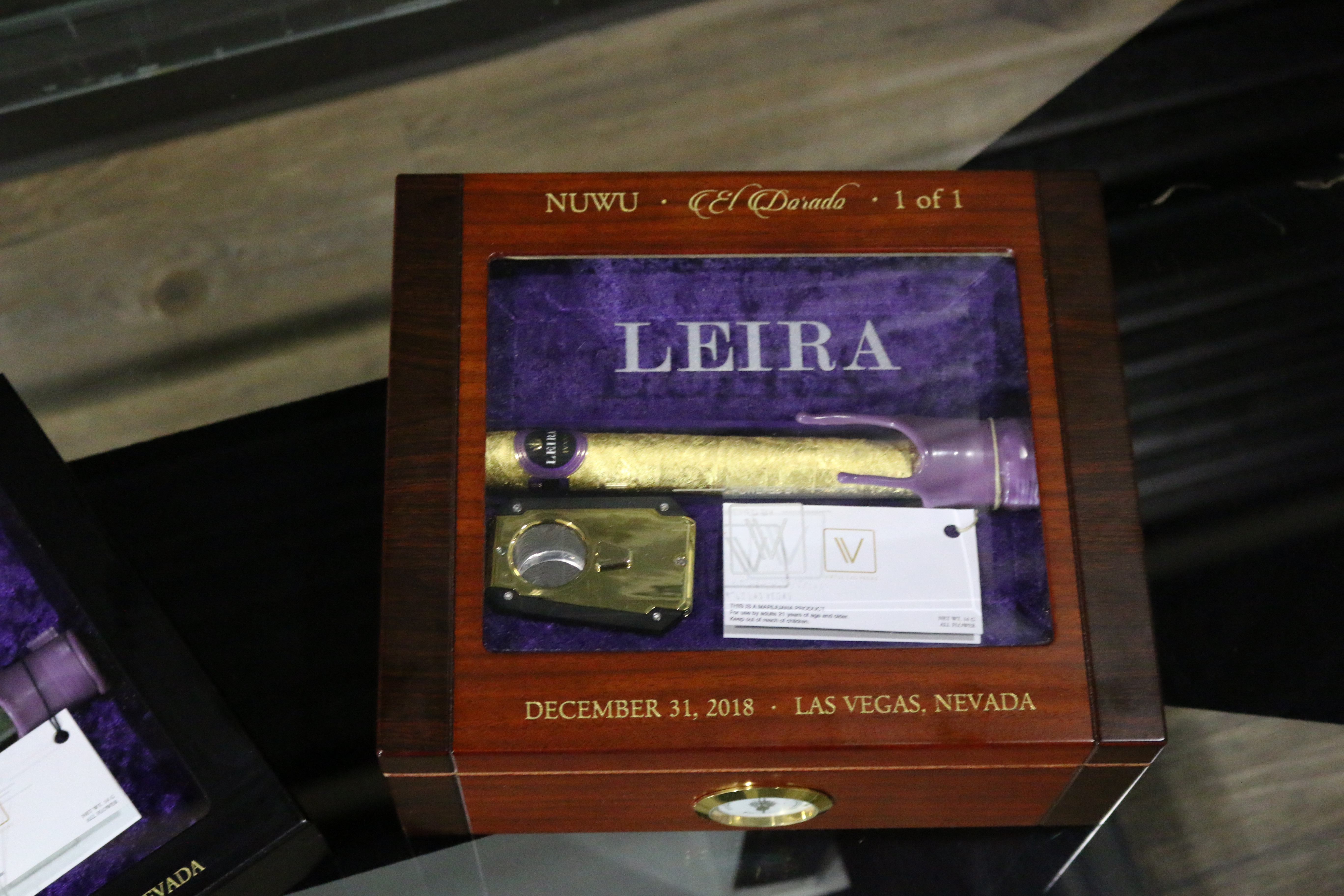 Resting in a wood-grain box lined with purple velvet, the massive smokeable boasted 24 grams of locally grown cannabis wrapped in hemp flower, then coated with edible 24-karat gold leaf. Hawkins, owner of The Hudson restaurant in West Hollywood, said he traveled to Las Vegas on behalf of a business partner, who wished to remain anonymous.

“We’re going to have a hell of a New Year’s party,” Hawkins said. “Honestly, I’ve always been a proponent of the industry and I’m happy that it has come this far.”

Payopay said the gold turns to ash when smoked, and is safe for consumption. 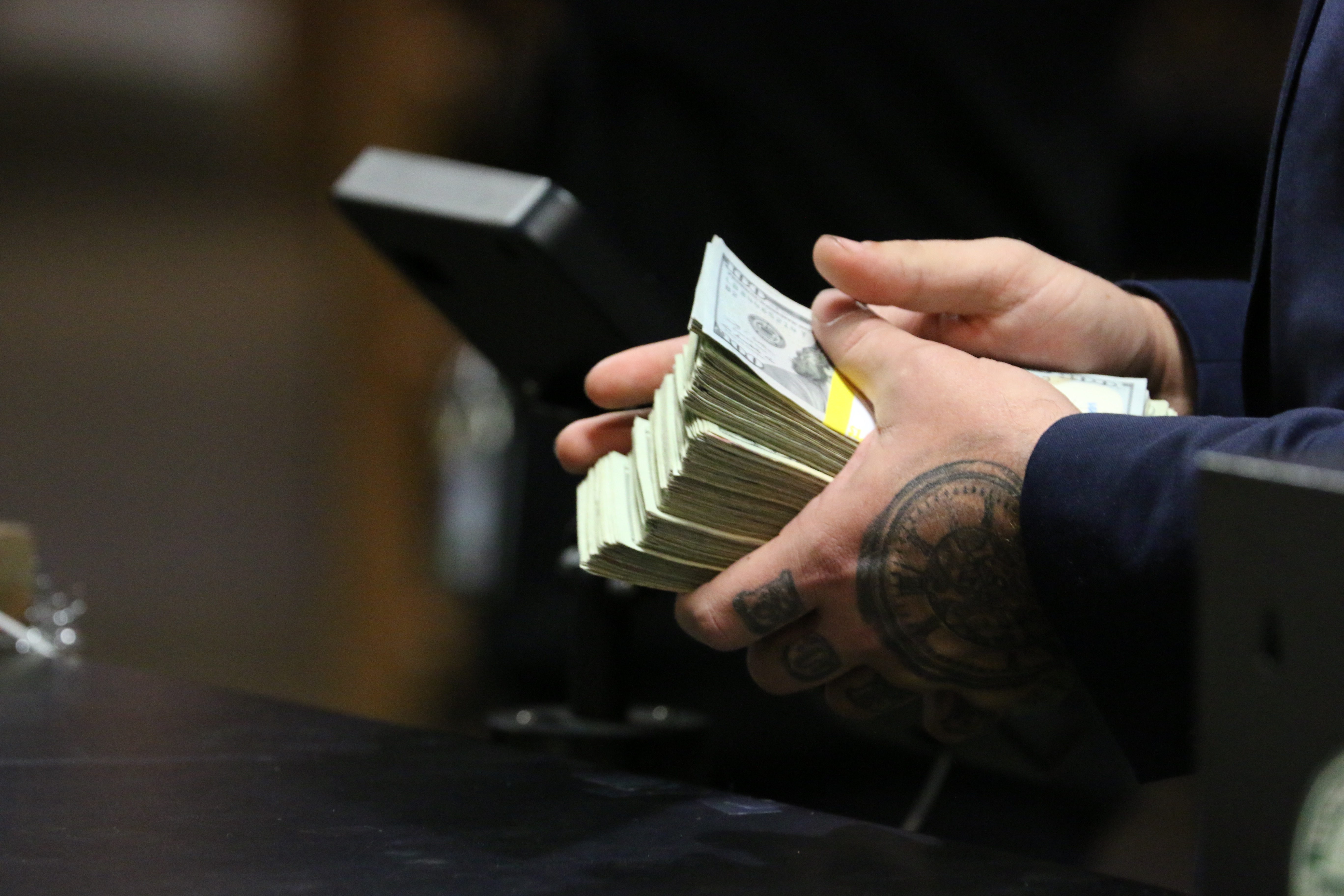 This is what $11K looks like, in Bennies and twenties. (Chris Kudialis for Leafly)

Friday’s cannagar sale price at NuWu topped the $10,000 cannagar—also produced by Leira—sold earlier this summer in Seattle. After seeing its work in Washington, Ranson Shepherd, co-founder of Virtue, partnered with Leira to produce its cannagars in Nevada.

The connection between the Los Angeles buyer, Las Vegas grower, Washington State producer and Native American tribal dispensary was formed in the Las Vegas nightlife industry, they said. Hawkins worked as a nightclub promoter for nearly a decade before moving to Los Angeles six years ago, as did Shepherd before co-founding Virtue. As Shepherd put it, “everybody is connected in some way, shape or form.”

“We had a chance to jump on the project and get it going and it was a natural fit,” Shepherd said. 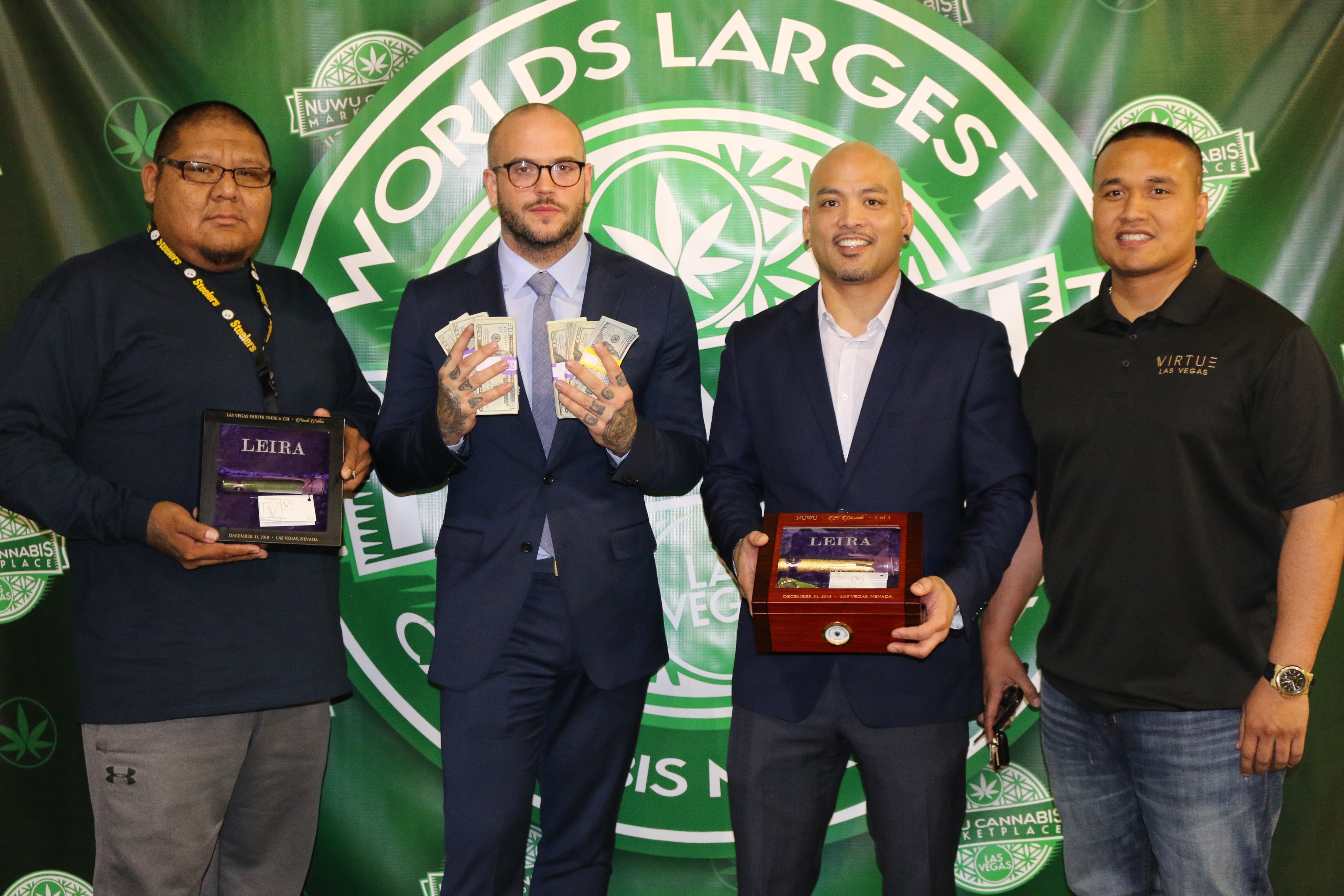 Hawkins said his partner’s interest in the cannagar began months ago, and he worked carefully with Virtue, Leira and NuWu to time the sale for New Year’s Eve.

Asked whether he believed he and his friends could smoke the entire cannagar in one sitting, he laughed, adding “it’ll be interesting, but we’re sure going to try.”

Nuwu, owned and operated by the Las Vegas Paiute Tribe, is Nevada’s only dispensary to also offer a drive-thru service. Hawkins said parties involved in Friday’s purchase initially discussed making the purchase at the drive through to “prove a point.”

Instead, Hawkins walked out to the center of the dispensary shopping area and handed Nuwu budtender Joe Delarosa the cash stacks at one of Nuwu’s 13 points of sale. Delarosa turned around, grabbed the box with the cannagar, shook Hawkins’ hand, and the purchase was official.

Meanwhile, business went on as usual. Hawkins thanked the staff and casually left the facility without delay.

This is the Future of Table Service

Benny Tso, tribal council and former chairman of the Las Vegas Paiutes, said Friday’s purchase served to “complement the store and complement the industry.” As marijuana consumption lounges move closer to opening in Las Vegas, Tso predicted that exotic cannagars like the product sold Friday will be a regular commodity for VIP clients at the lounges.

“This is what marijuana table service will look like in Las Vegas,” he said.