California is racing toward the launch of a state-regulated cannabis market, with sales set to begin Jan. 1 despite a number of unanswered questions.

On Thursday, with less than a month and a half before the program is slated to be up and running, state regulators unveiled a long-awaited package of emergency rules that will guide the industry through the transition ahead. We’re poring over those documents and will update this page with key takeaways from the newly released guidelines.

Have questions? Let us know in the comment section.

Bad news for medical patients or consumers who prefer high-potency edibles: The state will limit the serving-size of edibles to 10 milligrams of THC, with no more than 100 mg allowed in a single product package. While those limits are consistent with other states’ restrictions on adult-use edibles, most other states allow greater amounts of THC in products for the medical market.

Edibles will also be limited by shape—no human beings, animals, insects, or fruit—in an effort prevent making them appeal to children.

For non-edible cannabis products, such as tinctures, concentrates, and topicals, the state is setting separate limits on medical or adult-use products. Those on the adult-use market can contain up to 1,000 mg of THC per package, while medical products can contain twice as much (2,000 mg).

Products are also barred from containing nicotine, added caffeine, or—except in the case of tinctures—alcohol. Perishable products other than beverages are also prohibited. Products can’t contain seafood, nor can they have dairy other than butter purchased from a licensed entity. Low-acid canned goods are also off-limits. And all products need to carry the state’s cannabis warning label. 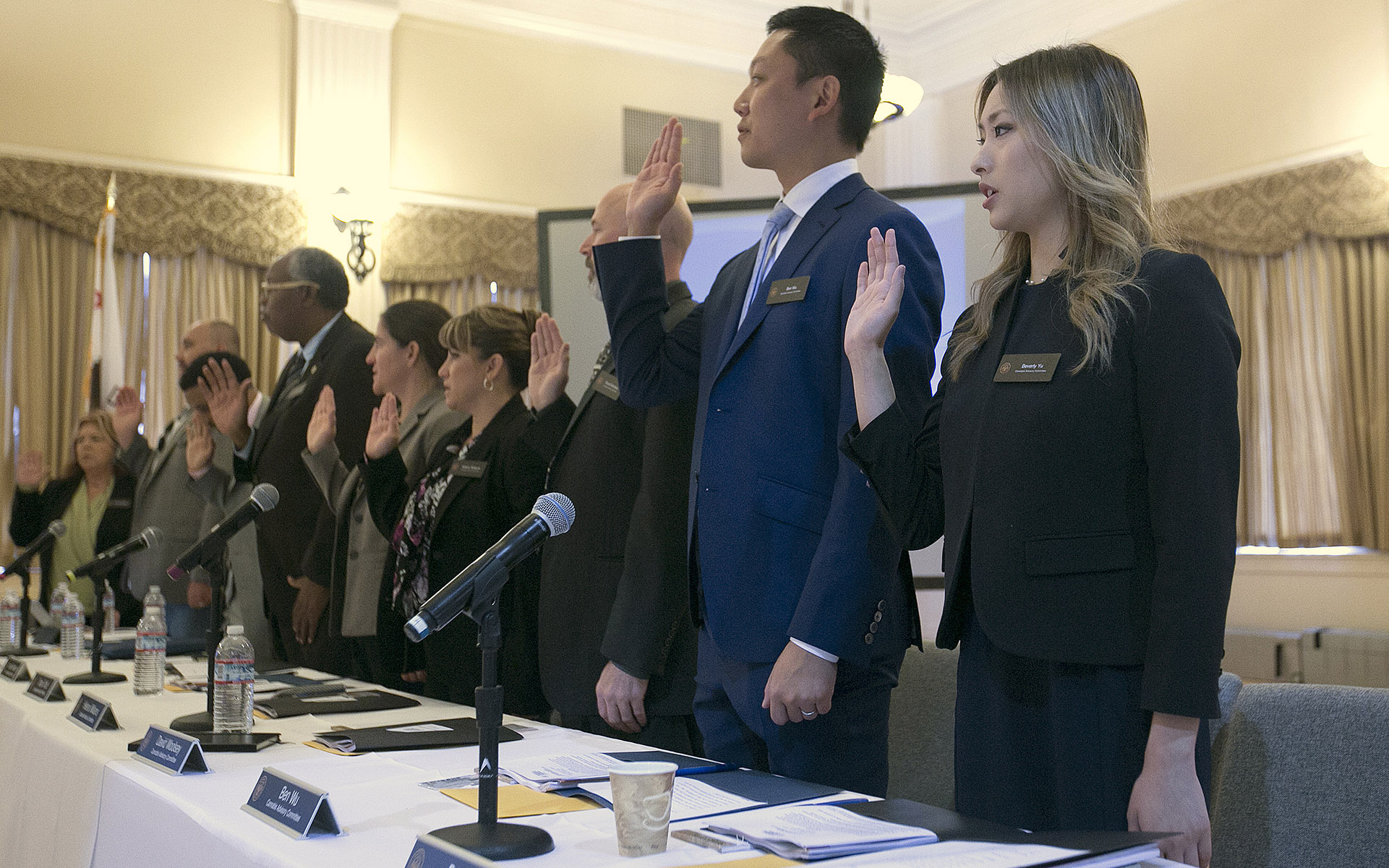 Beverly Yu, right, and other members of the Cannabis Advisory Committee, are sworn in during the committee’s first meeting, Thursday, Nov. 16, 2017, in Sacramento, Calif. The committee released the rules governing the nation’s largest legal recreation marijuana market. (Rich Pedroncelli/AP)

The state is imposing limits on the amount of cannabis a consumer or medical patient can purchase from a single retail retailer in a single day.

On the adult-use side, customers can buy up to 28.5 grams (one ounce) of non-concentrated cannabis, eight grams of concentrate, and six immature plants. Medical patients will have higher limit: eight ounces of cannabis. If a valid physician’s recommendation contains a different amount, medical patients can purchase an amount consistent with the doctor’s recommendation.

Gifts and product giveaways are not allowed on the adult use side. They are allowed, under certain circumstances, for medical cannabis patients. This is a recognition by state regulators that many veterans, lower-income patients, and others have and should benefit from lower-cost or free medicine.

What Cannabis Strain Has the Most THC, According to Lab Data?

Retail stores can operate between the hours of 6 a.m. and 10 p.m.—great news for early birds, not so much for night owls. Delivery is allowed, but only by a delivery employee of a licensed retailer. And no drones or bicycle deliveries for now—regulations allow deliveries made in enclosed automobiles only.

Retail stores and medical dispensaries will need to be at least 600 feet from a K-12 school, day care center, or youth center in existence when the license issued. Cannabis window displays are forbidden, and interior displays must not be visible to the outside public. Keep in mind that cities and counties are able to impose further restrictions.

Finding the ‘Green Zone’: How Specialty Realtors Are Cashing in on Cannabis

Edibles are also to be tested to make sure that concentrations of THC and CBD are spread evenly across the servings in a product package.

If the results of the test meet state standards, the products can be sold. If they fail, the products can be “additionally processed for remediation” and tested again. This can be done twice—if a product fails after being remediated twice, the entire batch is to be destroyed.

Regulators have said they’ll begin issuing temporary licenses to qualifying businesses on Jan. 1. These licenses will allow operators to engage in commercial cannabis activity for 120 days, and they may be extended.

Key to obtaining a temporary license is demonstrating local authorization. That means holding a valid license, permit, or “other authorization” issued by the jurisdiction where the business operates. Lori Ajax, the state’s chief cannabis regulator, said Thursday that the state “is being very flexible” on what that authorization looks like.

There is no fee for temporary licenses. “That’s supposed to make everybody happy,” Ajax joked.

“We know that once we start licensing people on Jan. 1, there’s going to be a lot of product out there that doesn’t meet our regulations,” Ajax said Thursday. In an effort to keep the situation from stopping sales or paralyzing the legal market completely, officials are putting in place a six-month transition period with a modified set of rules.

During the interim period from Jan. 1 to July 1, 2018, period, licenses are permitted to do the following:

Buying into California’s legal cannabis market ain’t cheap. Annual fees for some licenses start as low as $800, while others run as high as $120,000. (Remember, these are fees for annual operating licenses, not temporary ones.) Officials said Thursday the fees reflect the costs of administering the program. 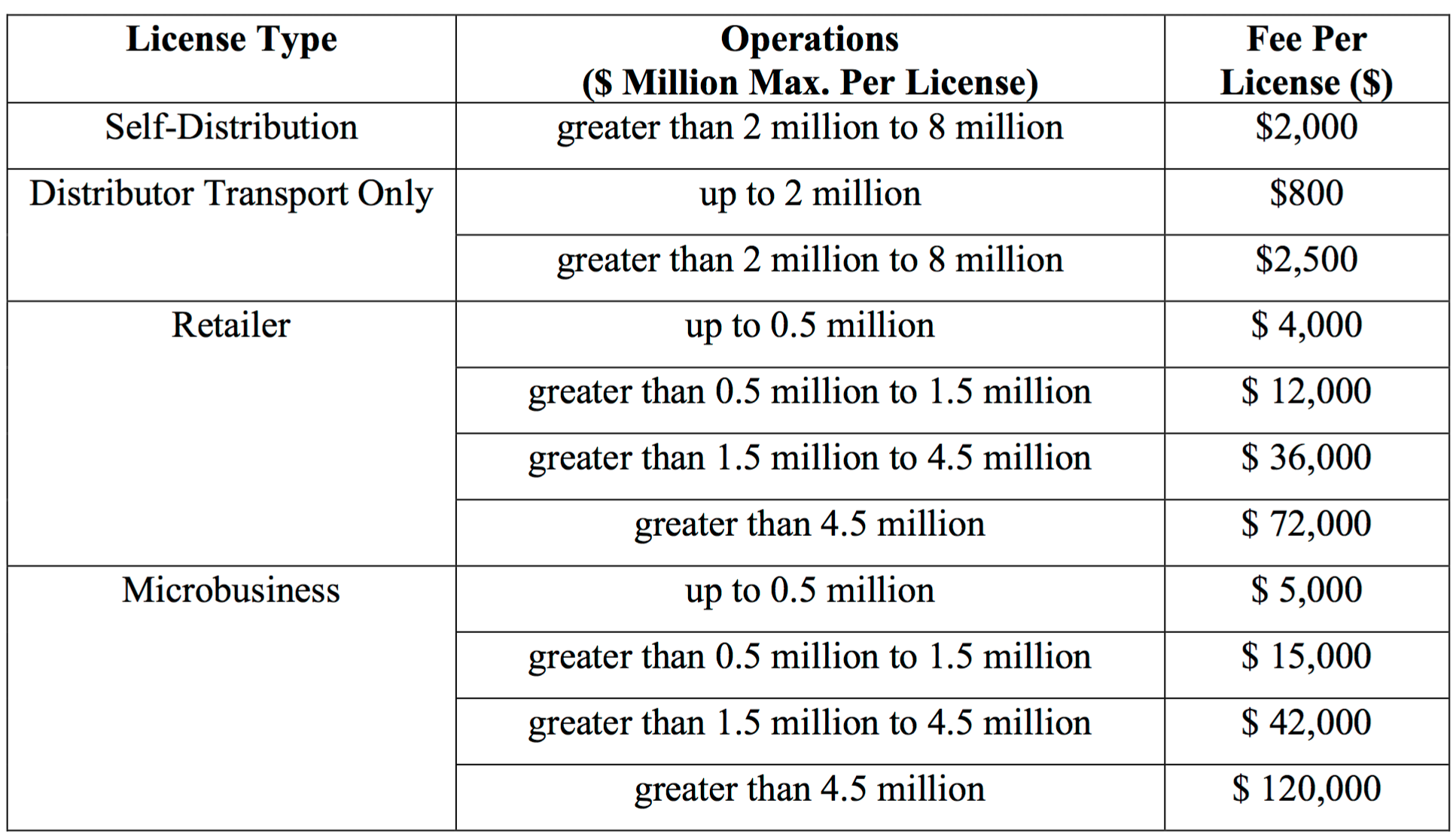 That “Operations” column is a little tricky to determine. The rules instruct the applicant to “estimate the maximum dollar value of its planned operation in terms of the value of the product expected to be tested, distributed, transported, retailed, and/or manufactured.”

In addition to those license fees, there are also license application fees—small fees that allow you to apply to pay the larger fee:

The language here remains murky. The state Bureau of Cannabis Control (BCC) says “owners” must submit fingerprints and background information including any past criminal convictions. But who’s an owner? Depends. The BCC defines an owner as anybody who holds at least 20% aggregate ownership interest in a commercial cannabis business; a company’s CEO or member of the board of a non-profit; and anyone participating in the direction, control, or management of the company applying for a license.

The 20% interest definition seems clear. In its materials, the BCC has put the public in an Eats, Shoots & Leaves pickle with that second clause, though. Are all CEOs and board members considered “owners,” or only those in non-profit organizations? Finally, “anyone participating in the direction, control, or management” of a company could potentially encompass a lot of employees within that company. So this will require some further definition from the BCC.

License Types: A and M

A license holder must hold an A-license to engage in adult use commercial cannabis activity, and an M-license to engage in medical cannabis activity. Testing labs may test cannabis goods for both types of licenses. It’s unclear whether a medical dispensary that wants to serve adult-use customers will have to obtain separate A and M licenses (and pay separate hefty annual license fees for both) or a combined A and M license.

The Bureau of Cannabis Control released the following package of documents on its website:

This story will be updated.