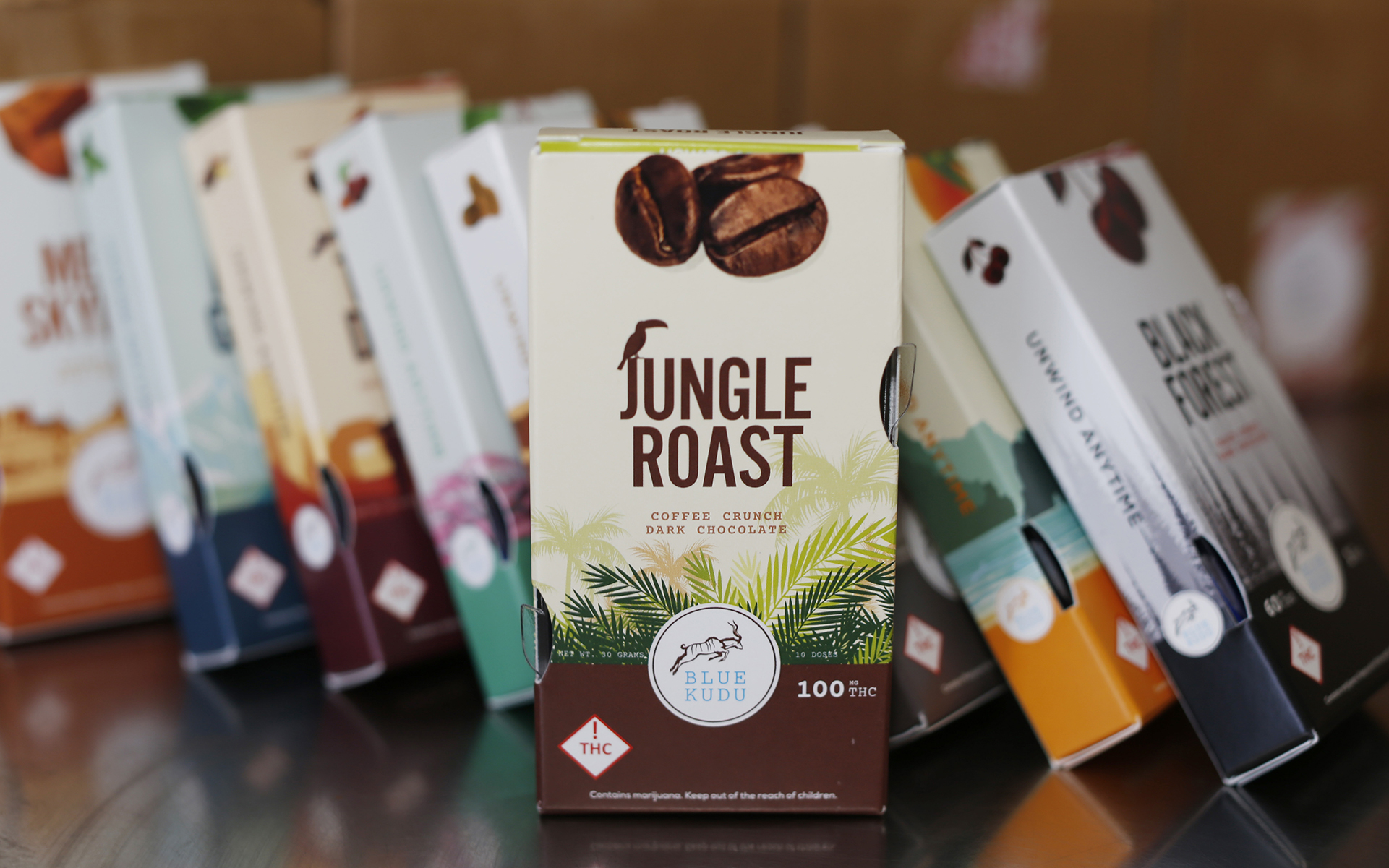 In this Monday, Sept. 19, 2016, photo, candy bars wrapped in new packaging to indicate that the products contain marijuana are shown in the kitchen of BlueKudu candy in the historic Five Points District of Denver. A new Colorado requirement, which goes into effect this Saturday, makes edible producers to label their goods with a diamond-shaped stamp and the letters T-H-C to distinguish the treats from their non-intoxicating counterparts. (AP Photo/David Zalubowski)
DENVER (AP) — Wondering if that brownie contains cannabis? Colorado has you covered.

A requirement that edible marijuana products come with a diamond-shaped stamp and the letters T-H-C — not just on the packaging but on the brownies, candies and other edibles themselves — takes effect Saturday.

The rule referencing marijuana’s psychoactive ingredient was added after complaints that the treats look too much their non-intoxicating counterparts. It is the first such requirement in any legal cannabis state.

Colorado’s new “universal symbol” for foods that contain marijuana is designed to give the treats a distinct look even after they’re out of the packaging. In other words, a pot cookie being passed around a high school cafeteria no longer will look so innocent, giving parents a way to identify marijuana edibles without smelling or tasting them.

Candies and baked goods may be simple to stamp, but the label requirement gets a lot trickier for bulk items such as granola.

The stamping requirement comes in addition to exhaustive labeling and packaging rules that include childproof zippers and lids, along with warnings that the product should be kept away from children and not eaten before driving or while pregnant or nursing.

“We want to ensure that people genuinely know the difference between a Duncan Hines brownie and a marijuana brownie, just by looking at it,” said state Rep. Jonathan Singer, a Democrat who sponsored the law requiring stamped edibles.

Marijuana ingestions remained relatively rare, though, with the hospital reporting 81 children treated for accidental ingestion between 2009 and 2015. Authors noted that “poor child supervision or product storage” was present in about a third of those cases.

Still, reported accidental ingestions caught lawmakers’ attention. The law was passed more than a year ago but is just now taking effect because of difficulties implementing it. None of the other legal states has considered a universal symbol requirement for marijuana products themselves, as opposed to the packaging.

Candies and baked goods may be simple to stamp, but the label requirement gets a lot trickier for bulk items such as granola, or marijuana-infused sodas or powders that can be dissolved in water. The state ultimately settled on new packaging rules for those impossible-to-stamp items, requiring that sodas come in small single-serve bottles, for example.

Colorado also requires that edible packages contain the phrase, “Keep out of reach of children.”

At BlueKudu, which makes marijuana-infused chocolates, owners had to buy new molds for a line of candy bars that include flavors like mint chocolate, toffee almond and coffee crunch.

Company founder Andrew Schrot said that when he started his company in 2011 for medical marijuana customers, his pot treats looked like any other chocolate bars. But he said the switch to a recreational market in which new marijuana users were trying his products necessitated change.

“This is not your normal chocolate bar. There’s something different about it. You can tell just from looking at it,” Schrot said. 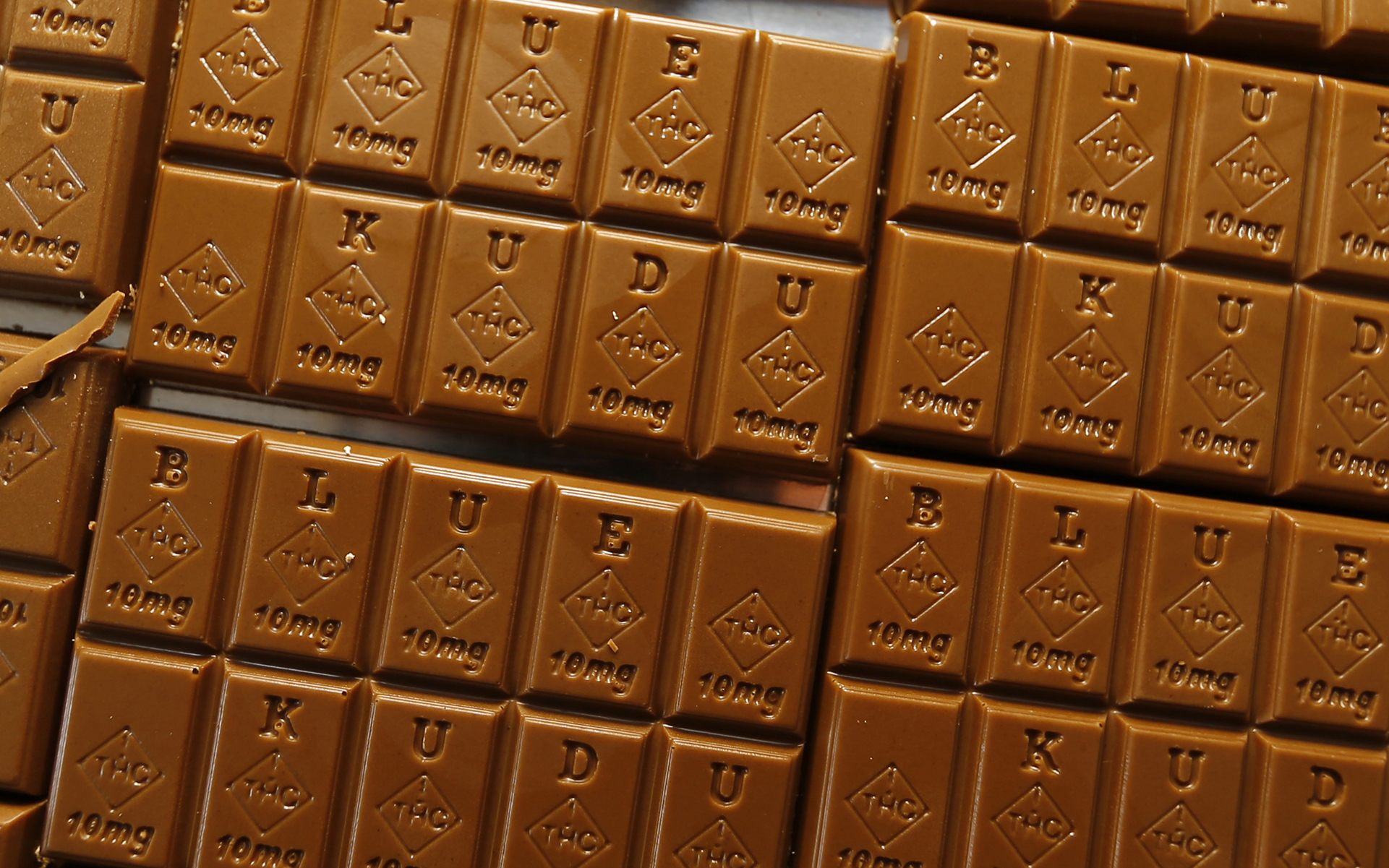 Chocolate bars marked with Colorado’s new diamond-shaped stamp noting that the product contains cannabis. State officials require the stamp to be put directly on edibles after complaints that the treats look too much like their non-intoxicating counterparts. (AP Photo/David Zalubowski)

Colorado’s marijuana industry initially was hesitant about the change, pointing out in regulatory meetings that alcohol makers aren’t required to dye their drinks funny colors to make sure parents don’t let kids get ahold of the booze.

“Some of the industry expectation was, ‘Let’s keep it on the parents and the users in keeping it away from children or people who shouldn’t use it,'” Schrot said. “But you know, sometimes mistakes happen. You turn your back and a product is left out.”

Colorado has no estimate of how many accidental ingestions might be avoided by the stamping. Starting next year, the state also will ban any edible marijuana products in the shape of a fruit, animal or human — in addition to existing bans on the use of cartoon characters on packages or other images deemed attractive to kids.

“It’s really a step in enhancing public safety and making sure that marijuana is out of the hands of children,” said Ron Kammerzell, head of enforcement for the state Marijuana Enforcement Division.