Medicating in Wartime: The Cannabis Legacy of Vietnam Veterans 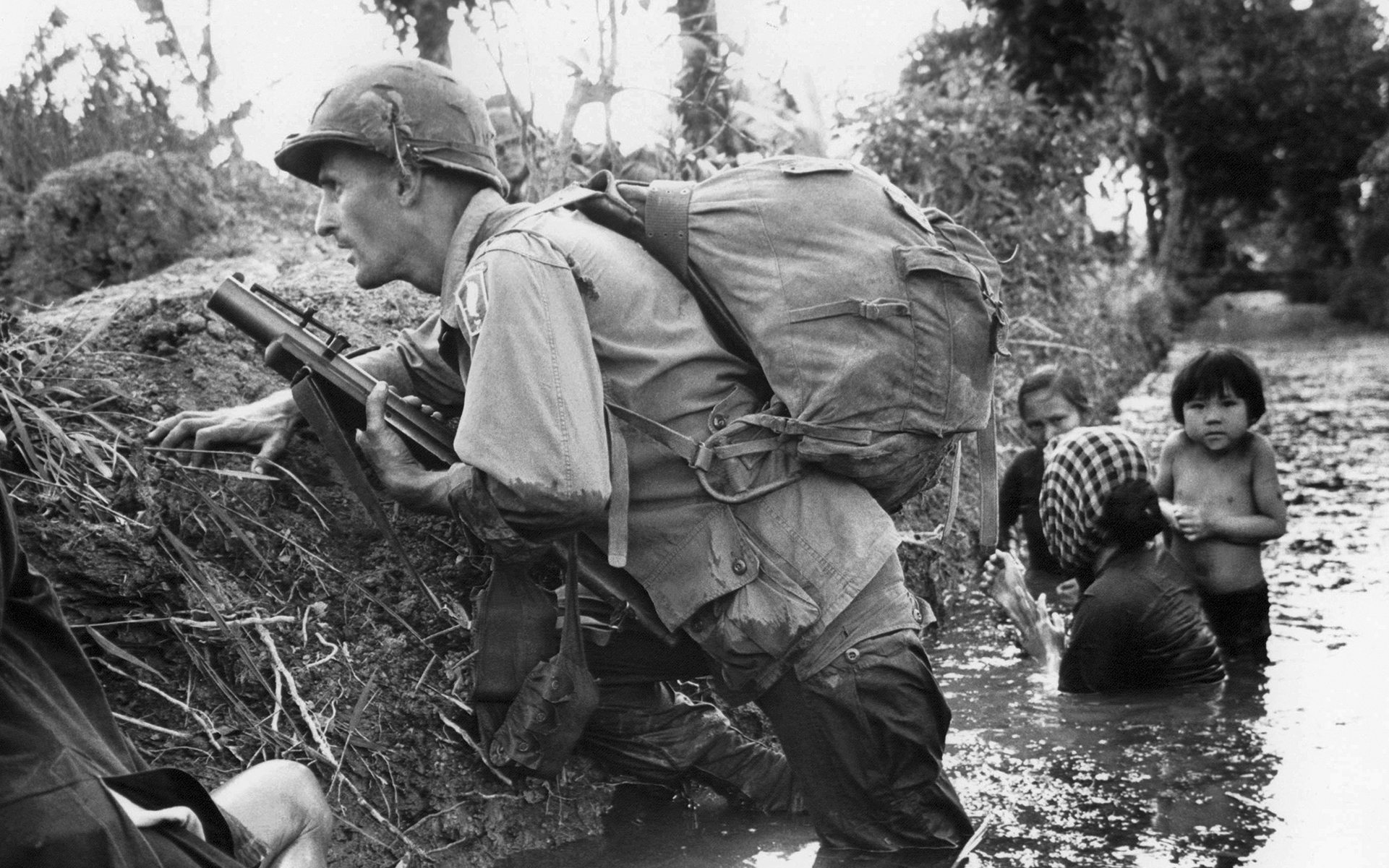 In this Jan. 1, 1966 file photo, a Paratrooper of the 173rd U.S. Airborne brigade crouches with women and children in a muddy canal as intense Viet Cong sniper fire temporarily pins down his unit during the Vietnamese War near Bao trai in Vietnam. (Horst Faas/AP, courtesy of Ken Burns/PBS)
April 30th marks the 43rd anniversary of the Fall of Saigon and the end of the War in Vietnam. About three million Vietnamese, and more than 58,000 Americans, were killed during the war.

Studies have found that about one-third of American soldiers in Vietnam consumed cannabis.

Close to three million American men and women served in Vietnam. And around one-third of those military personnel, according to recent studies, smoked marijuana.

Cannabis grew wild in Vietnam and access to “reefer” was never an issue for U.S. military personnel. “Over there we were getting the premium stuff—no stems and seeds,” said John Adams, a retired computer engineer living in Riverside, California. Adams served two tours in Vietnam as a U.S. Marine in the late 1960s, with the 1st FSR Logistics Group in Da Nang.

“You’d get in a jeep, run down to Four Corners,” he remembered, “and get 20 pre-rolled joints for 10 bucks. It was pretty; I wish I had a picture of it.” It was pretty heady stuff, too: “You’d take two hits and you’d have to sit down.” 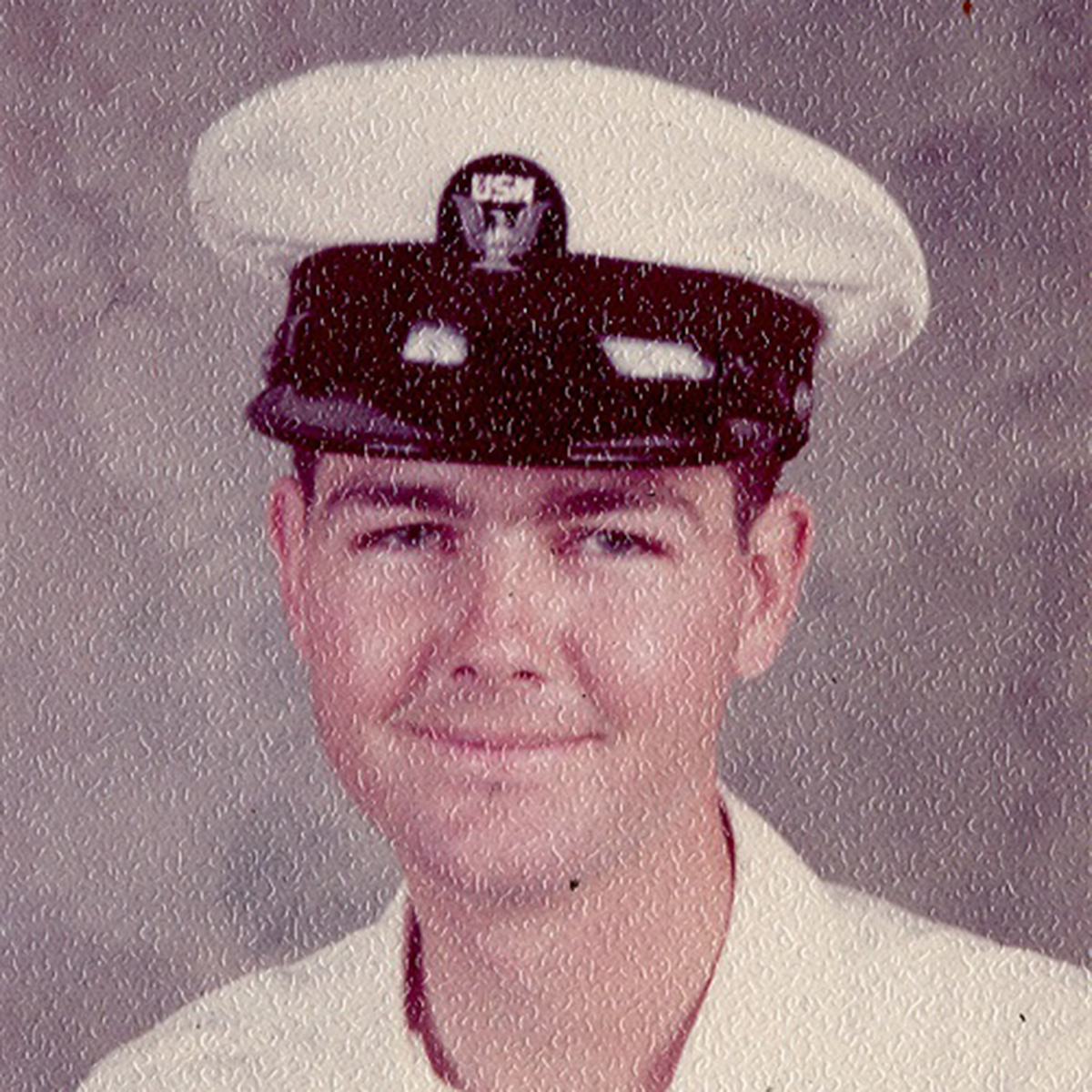 Many Soldiers, But Not All

While soldiers might have smoked marijuana while in combat, it was more common for military personnel to enjoy cannabis once they were off the front lines.

'The Army didn't really police it until it became a PR issue.'
Jeremy Kuzmarov, author of 'The Myth of the Addicted Army'

One 70-year old veteran Leafly spoke with, a Long Island, New York resident who was part of an Army long range reconnaissance patrol unit (LLRP, pronounced “lurp”) from 1967 to 1969, said he saw very little marijuana smoked while on patrol near the Demilitarized Zone (DMZ) between North and South Vietnam.

“Not in my unit,” said the veteran, who asked that his name not be used—and who we’ll call Alan.

“It was mostly in the rear, off-duty or back where there was no action. It was not really done front line. I’m sure there were [front line cannabis smokers], but I was in a different arena than most. It had to do with being ready and alert and keeping your focus.” 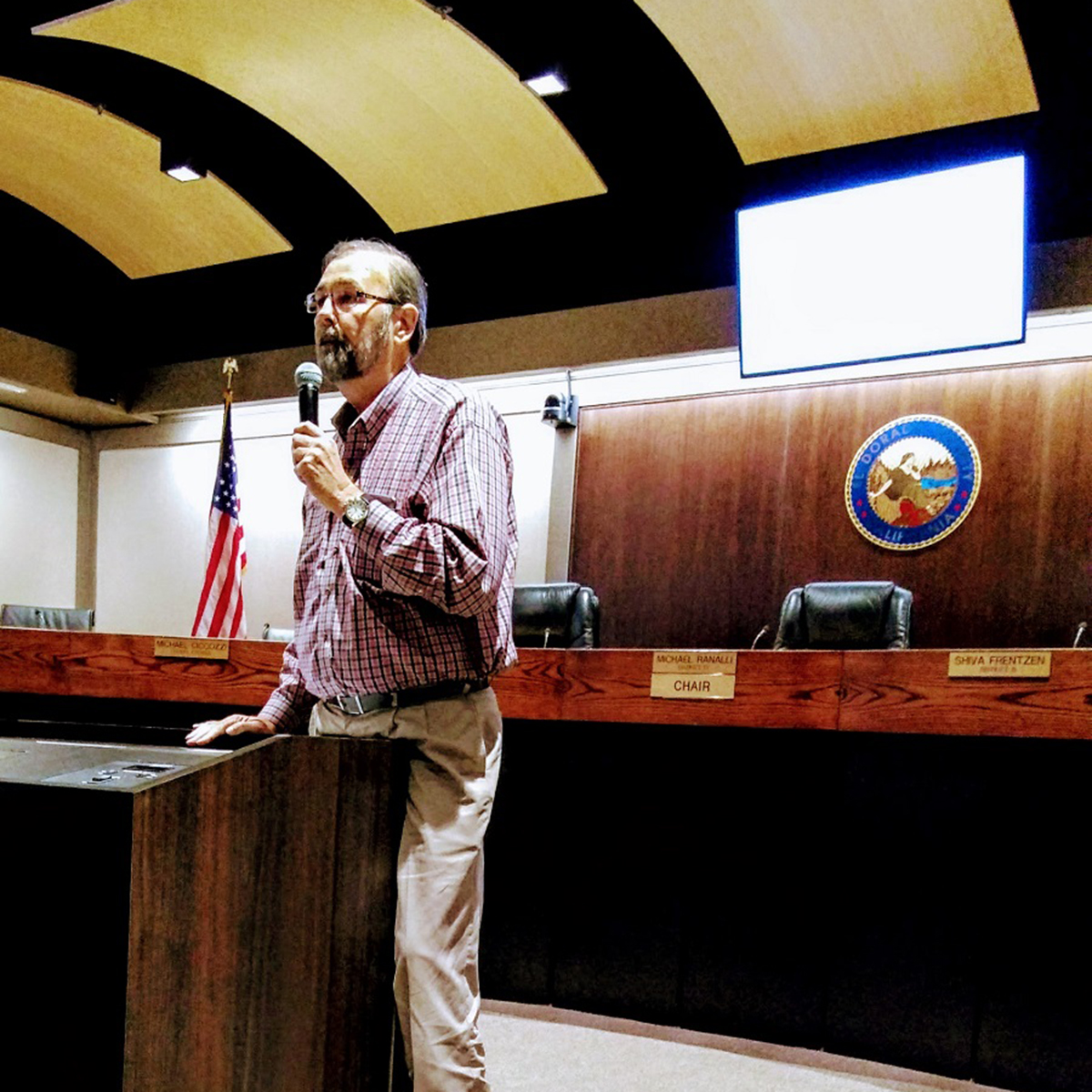 It appears that cannabis use was an open secret in Vietnam during the war’s early years.

Cannabis was 'the only way to deal with the craziness over there.'
John Adams, US Marine, Vietnam veteran

“For a while the Army didn’t really police it that strenuously, until at a certain point when it started to appear on the public’s radar screen and became a PR issue,” said Jeremy Kuzmarov, assistant professor of history at Tulsa University and author of The Myth of the Addicted Army: Vietnam and the Modern War on Drugs.

Media reports of soldiers and marines smoking marijuana while in the field grabbed headlines, as well as the attention of the military brass. That led to a crackdown on cannabis in Vietnam. Kuzmarov also points to rumors and reports at the time about marijuana contributing to rampant drug abuse among soldiers, as well as weakening combat efficiency, a collapse in military discipline and even rumors of cannabis as a factor in war atrocities. 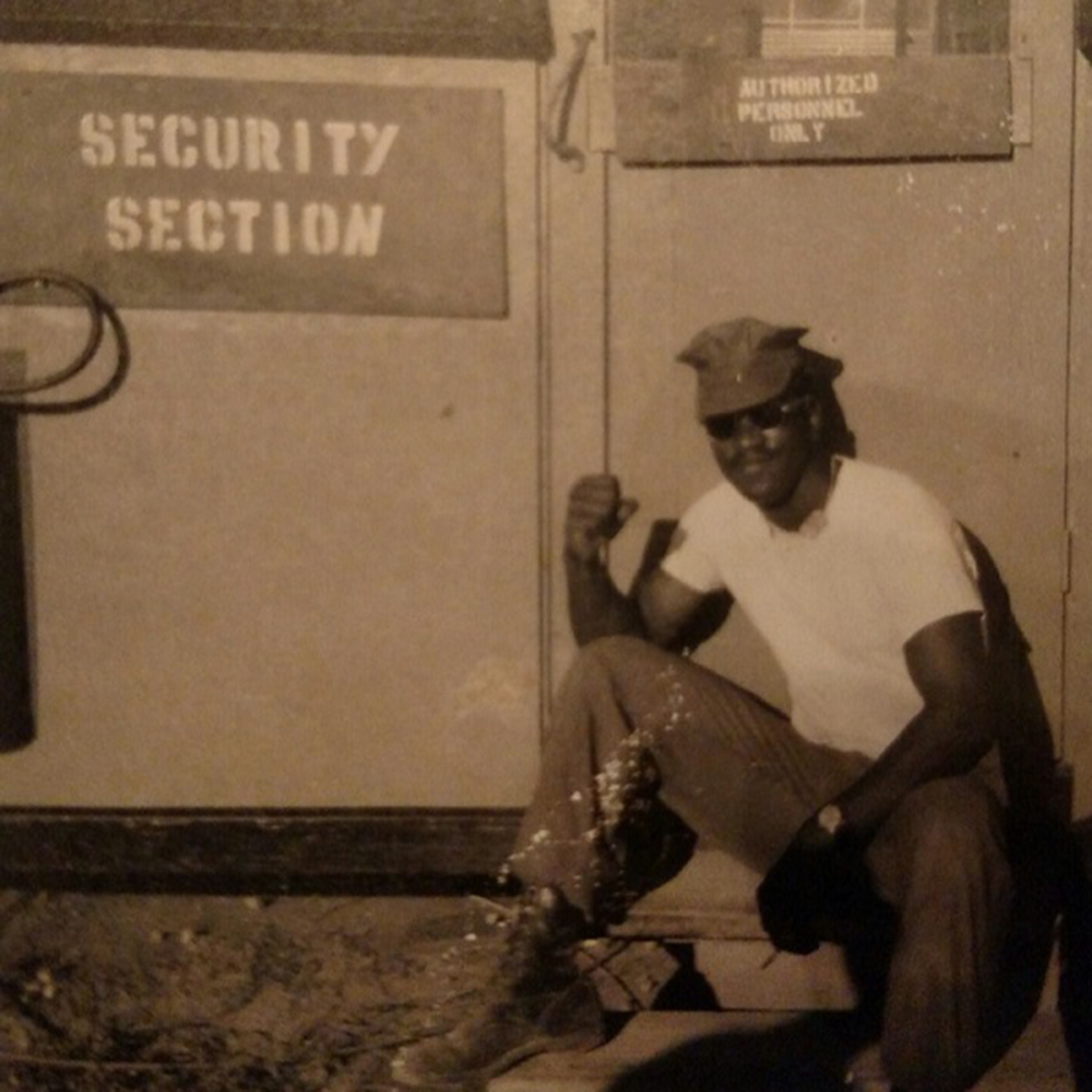 Medicating Before it Was a Term

But many Vietnam veterans will tell you otherwise—that cannabis was actually their way of coping with war’s nightmares.

“When you watch men women and children get blown apart and you have to come back and deal with that, sometimes you have to have some means of closing down,” John Adams told Leafly. “So realistically, where we weren’t on duty we were either drunk or high.”

“I can tell you this, that those of us that were ‘in the rear with the gear,’ whenever we had the opportunity we did it,” he added. “That was the only way to deal with that craziness over there.” 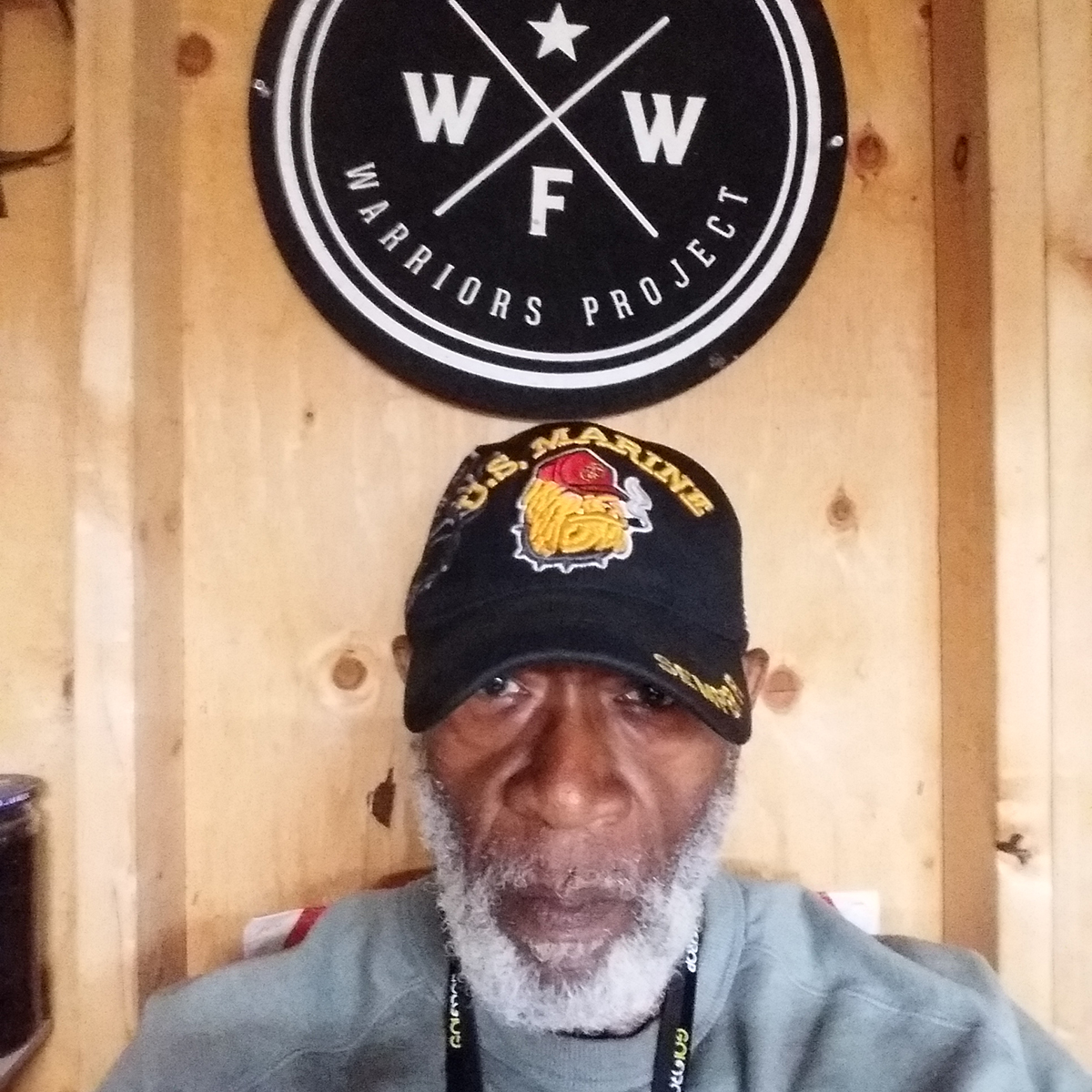 John Adams today: President of a Weed for Warriors chapter.

Relaxing on the Fantail

Sacramento native Bill Crain, now 62, was a boatswain’s mate on the USS Molala, a Navy ocean-going tug, when he first tried cannabis in the waters off Vietnam’s Cam Ranh Bay.

“When I got on the ship, growing up in that generation I grew up in, you watched the news and there were things going on in Vietnam,” he told Leafly. “I was 17, a little nervous. The guys would smoke weed on the fantail at night. So I would go up there and smoke and relax.” Crain said about a third of the Molala’s crew were pot smokers at the time.

For Veterans With PTSD, Medical Marijuana Can Mean a Good Night’s Sleep

Dale Schafer, 64, a California-based attorney specializing in cannabis law, was a Navy hospital corpsman from 1974 to 1976.  He spent much of that time in an Oakland hospital dealing with trauma patients, mostly wounded and otherwise injured servicemen and women brought back from Vietnam.

'The people I partied with were the ones doing the drug testing.'
Dale Schafer, former Navy hospital corpsman

He laughed when asked whether he used cannabis while in the Navy.

“It was very interesting,” he told Leafly. “When I first went in and went to boot camp I thought people didn’t do it. But once I cleared boot camp the next place I landed was corps school and people were using it there. There was random drug testing, basically for-cause drug testing if they found suspicious activity. They’d make you piss-test, and I never got piss-tested so I never had to face it.”

When Schafer was transferred to Oakland for his duty station, he discovered that cannabis “was all over the place there. And interestingly enough, the people that I partied with were the ones doing the drug testing.”

After their military experiences, many Vietnam-era vets returned home to a country that didn’t want to be reminded about the war.

“When we got back we were looked on as pariahs,” said Alan. “Times have changed, and in a way I’m glad. Soldiers when they come back to The World they have a hard time adjusting. At least now they are accepted.”

For Bill Crain, coming home was hard. An attempt to smuggle cannabis back to the States ended up with him going to a Navy drug rehabilitation center.

“I was raised upper middle class,” he said. “I come back after being discharged from the Naval Drug Rehabilitation Center, was told by family I was a bad influence on my brothers and sisters, so they don’t want me around. I really didn’t know anybody other than family to go to, and I ended up homeless. I worked my way up from that.”

How the American Legion Became a Medical Cannabis Advocate

Crain and other veterans continued to use cannabis while they coped with the physical and mental scars left from the war.

According to a 2015 study by JAMA (Journal of the American Medical Association) Psychiatry, more than 270,000 of surviving Vietnam veterans are still living with Post Traumatic Stress Disorder (PTSD). Of those veterans suffering from PTSD, about one-third also cope with a “current major depressive disorder” all these decades later.

But a growing number of veterans from the Vietnam, Iraq and Afghanistan conflicts are using cannabis to treat PTSD as well as chronic pain and other ailments.

The American Legion, the nation’s largest veterans organization, has been calling on the federal government to legitimize cannabis and invest in medical marijuana research.

“Our National Executive Committee, most of whom are Vietnam-era veterans, approved a resolution in 2016 that called for the removal of cannabis from Schedule I and called upon the federal government to enable greater research into the safety and efficacy of the drug,” Joe Plenzler, the Legion’s director of media relations, told Leafy via email.

Veterans groups like the Weed for Warriors Project, HeroGrown and other cannabis advocacy organizations have also sprung up, advocating for veterans to access medical marijuana as a viable treatment option, especially as an alternative to the opioids and other prescription drugs. The overprescription and overreliance on those drugs, say some advocates, contributes to the estimated 20 veteran suicides a day in the U.S.

“The Veterans Administration needs to understand whether overmedication of drugs, such as opioid pain-killers, is a contributing factor in suicide-related deaths,” Senator John McCain of Arizona, a Vietnam veteran, said last year. 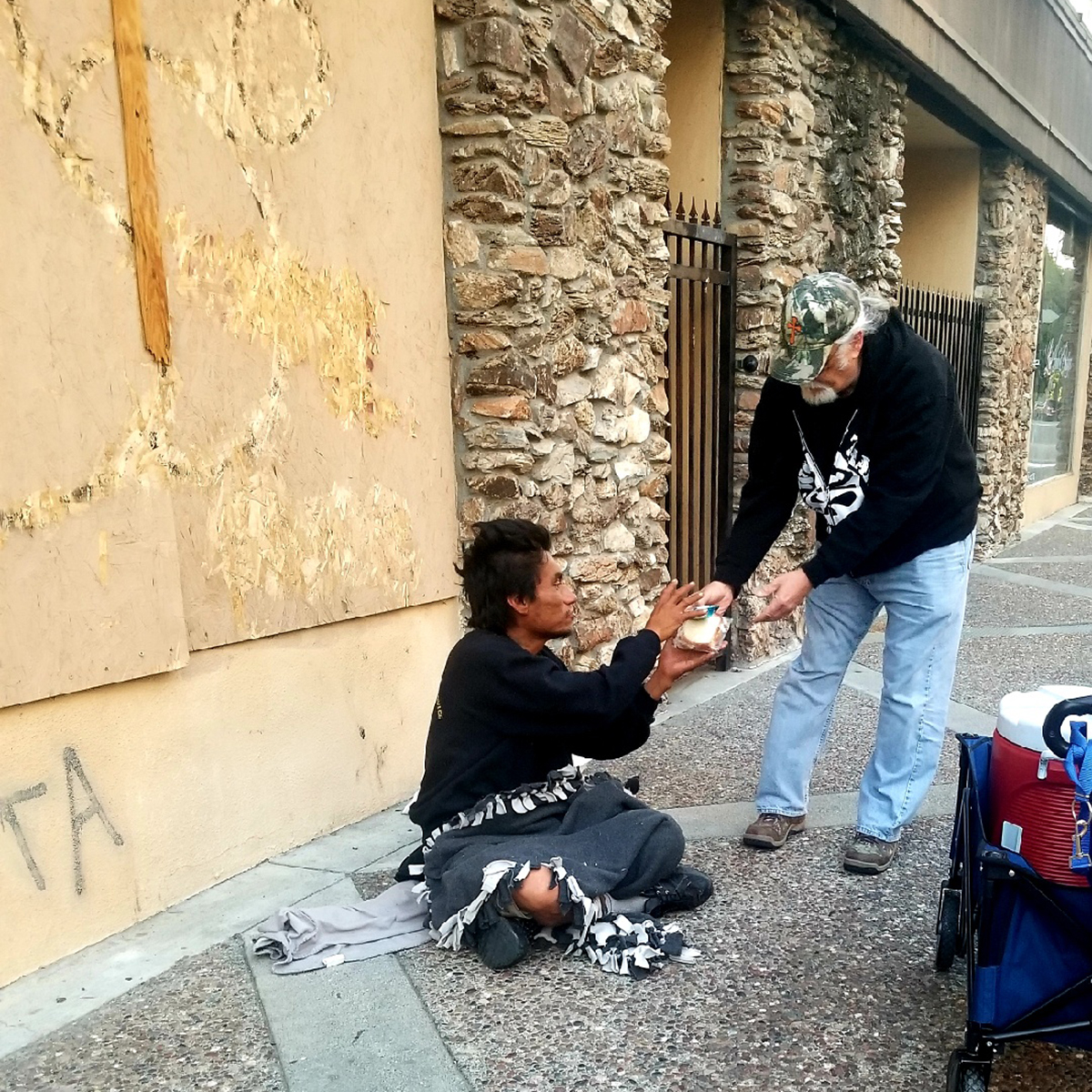 Veteran Bill Crain, right, reaches out to others in Sacramento through Weed for Warriors.

John Adams became president of a Weed for Warriors chapter last year. Along with their work with veterans, the group also does community-based projects like feeding and clothing the homeless, beach cleanups, and working with local food banks.

Bill Crain credits Weed for Warriors with showing him how to properly medicate with cannabis, how to deal with his PTSD, and how to give back to the community.

“Before I started going to Weed for Warriors, my PTSD got so bad I just stayed in my house,” he said. “I didn’t go anywhere. I didn’t have a lot of friends. But I just got back today from going downtown, feeding the homeless. I like hanging out with this group of vets. We’ve all got the same kind of issues.”

‘The Energy Is Back Again’

Dale Schafer, who served five years in federal prison for growing medical marijuana in a home garden, now serves as legal counsel for Weed for Warriors. He believes the political activism that Vietnam-era veterans grew up with, especially when it came to cannabis and cannabis legalization, is being revived in the current political landscape.

“What we’re seeing is the energy that was generated, as my generation tried to bring the war to an end, is back again,” he told Leafly. “We’ve gone through how many years of watching the pendulum go back and forth and nothing actually getting done. Right now a lot of people in this country are awake to the possibility that they can do something.”

Archive photos: courtesy of subjects portrayed. All others: Bruce Kennedy for Leafly.

Bruce Kennedy is an award-winning reporter, editor, and producer based in Colorado. He has covered the legal cannabis industry since 2010.