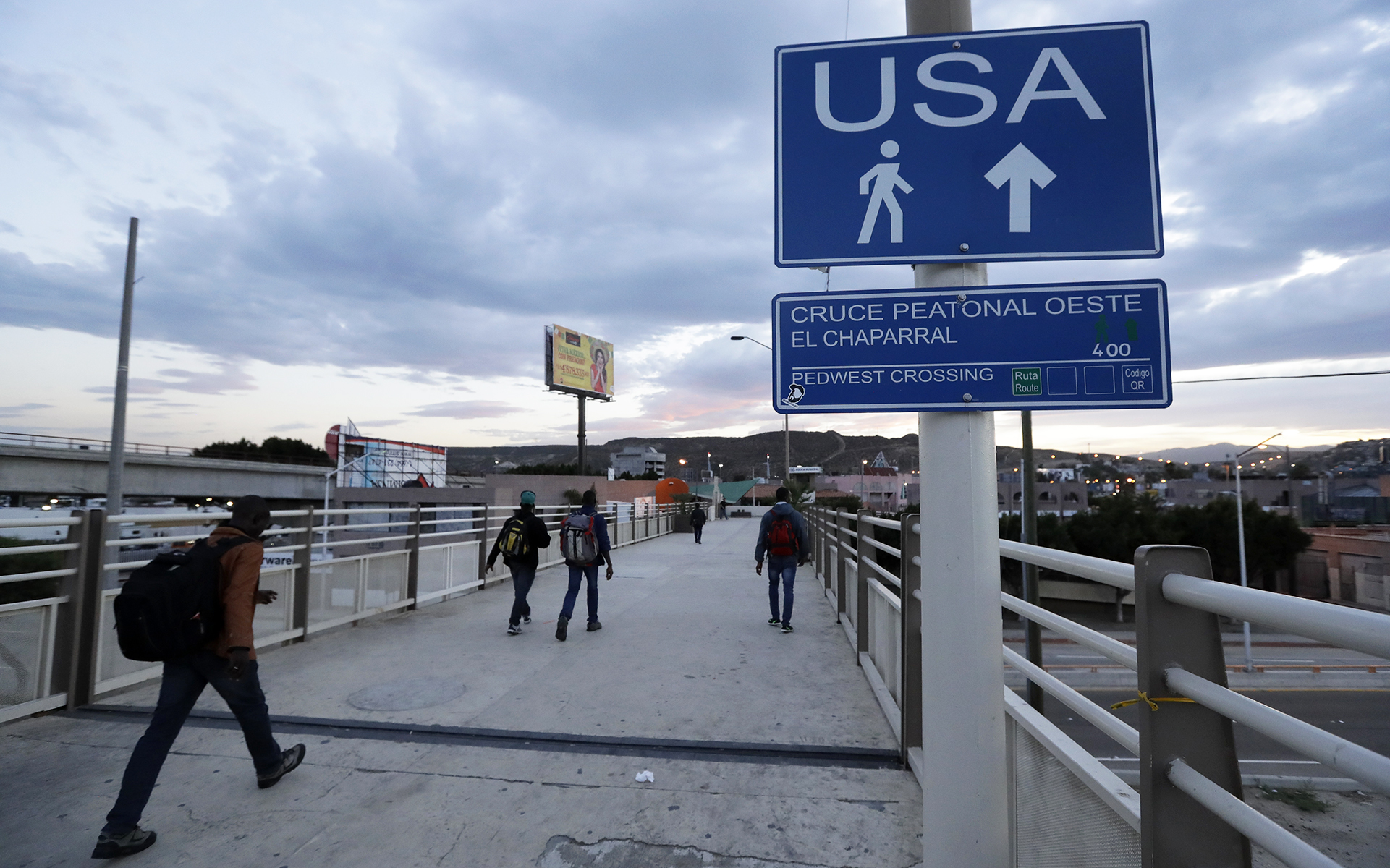 For the software entrepreneur from Hong Kong, the business trip to the US to meet with Silicon Valley investors was also a homecoming. He had lived in the San Francisco Bay Area for years while studying computer science at San Jose State University. During that time, he’d adopted some California customs—including treating his back and neck trouble, which he’d developed during long hours hunched over a laptop, with occasional puffs of medical marijuana.

The trip ended before the entrepreneur could leave the airport. Arriving at customs on a business visa, he encountered immigration officials who asked him questions about cannabis, according to Zachary Nightingale, a San Francisco-based immigration attorney who later consulted on the man’s case. (At Nightingale’s request, Leafly News is not identifying the man by name.) As soon as he mentioned his legal medical marijuana use, he was deported—forever.

“This was a legitimate businessman,” Nightingale said. “He thought he was doing everything by the book. They were like, ‘Sorry, buddy—we’re canceling your visa, and you can never come back to the United States.’”

It was hardly an isolated incident. Another man, who was employed at a major Silicon Valley tech firm on an H1-B visa, fared slightly better. After his airport interview turned up a medical cannabis recommendation, he was admitted into the country—but only for a week. Customs officials gave him just long enough to clean out his apartment before he, too, was deported, Nightingale said, with no chance of future re-entry.

Medical cannabis is legal in California and nearly 30 other states, and adults 21 and over can legally possess and consume marijuana in eight states and the District of Columbia. But at the federal level—where decisions are made about who can come into the country, who can become a citizen, and who can’t—marijuana remains illegal. And under federal law, any connection to cannabis—including legal past use, whether in the US or abroad—is grounds for denial for entry into the country.

Legal cannabis consumption has been used to justify the cancellation of tourist and business visas, and the denial of citizenship and green-card applications, for years, according to immigration attorneys and drug policy advocates interviewed for this story.

If a customs official at the Canadian border spots a marijuana-leaf sticker on a car or discovers a medical marijuana recommendation in a wallet at the airport—and if and marijuana use is admitted in a subsequent interview—the traveler will be sent home. This was true when Barack Obama was president.

Experts are advising immigrants to scrub any mention of cannabis—including photos—from their mobile phones and social media.

But since Donald Trump’s election, zealous immigration and border officials have compelled legal experts to warn individuals against admitting any connection to cannabis. According to an advisory issued earlier this month by the San Francisco-based Immigrant Legal Resource Center, “More and more, immigration officers are asking citizens and noncitizens alike if they have ever used marijuana—especially in states that have legalized marijuana.”

Those who admit to any cannabis use, at any time, anywhere, have been refused entry into the United States—or deported if they’re already here.

That’s true not only for individuals who entered the country illegally, but also for green card holders (legal permanent residents), who have been warned to refrain from all cannabis use. Experts are also advising them not to seek employment in the cannabis industry, and to scrub any mention of cannabis—including photos—from their mobile phones and social media accounts.

In states where recreational use is legal, federal officials are asking more citizenship hopefuls cannabis-related questions. “As more and more states legalize, [officials] get more and more irritated,” said Kathy Brady, senior staff attorney at the Immigrant Legal Resource Center. “They go to the states where’s it’s legalized and entrap people by having them admit to something that’s legal under state law.”

“It’s happening very intensely in Washington state,” she said. She’s expecting to see a similar uptick in cannabis-related questions during naturalization interviews in California following the passage of Prop 64, she said, “although we haven’t seen it yet.”

As States Legalize, Feds Double Down on the Border

The clash of new-generation cannabis legalization in states like Colorado, Washington, Oregon—and soon in California—is clashing directly with old-school border laws that treat anyone who’s ever touched a joint as a world-class drug smuggler. Add in the incriminating email and social media trails that most people now lay down, and you get a situation that’s injecting fear into thousands of legal border crossers. The Canadian government is expected to soon introduce legislation that would legalize cannabis for all adults 18 and older. But that law probably won’t become effective until July 2018–and it’s hard to say exactly how it will impact the questions asked of travelers at border crossings.

“What sites do you visit? And give us your passwords.”
John Kelly, US Homeland Security Secretary

Since Trump administration came to power, laptop and mobile device searches by Customs and Border Protection (CBP) officers have gone from rare occurrences to common demands. In 2009 and 2010, CBP officers nationwide conducted an average of 302 and 383 electronic device searches, respectively, per month. According to a recent NBC News report, that number grew to nearly 2,100 per month in 2016. Department of Homeland Security officials told CNBC that 5,000 devices were searched at the border in February 2017 alone.

This graphic captures the spike in electronic device searches at the US border by Customs and Border Protection officers:

“What sites do you visit? And give us your passwords.”

It appears Kelly’s wish has become official policy on America’s borders. And once a CBP officer has a traveler’s phone or laptop (and passwords), it may only take a five-second Gmail, Facebook, or Twitter search for “marijuana,” “weed,” “pot,” or other cannabis-related terms to turn up enough evidence to refuse that person entry.

Cannabis use, and especially a cannabis arrest, can be used to deny entry or deport an otherwise legal entrant or resident. As Leafly contributor Stephen Paulsen will show in tomorrow’s series installment, even a minor, decade-old cannabis conviction is now considered grounds for deportation.

The Fallout Here at Home

Trump’s election, and the subsequent deportation fears, has even canceled out some of the anticipated benefits of Prop 64, California’s adult-use legalization initiative. The measure was expected to help noncitizens in the form of post-conviction relief— reducing felonies to misdemeanors—and employment opportunities in the cannabis industry, according to a September analysis from the Immigrant Legal Resource Center.

But since the election, the Los Angeles County Public Defender has put on hold efforts to expunge past marijuana convictions for undocumented immigrants over fears of alerting Immigration and Customs Enforcement, said Eunisses Hernandez, a policy coordinator with the Drug Policy Alliance.

Moreover, all noncitizens are being urged to stay away from marijuana jobs—including the agricultural work that pays better and offers better working conditions than wineries and farms that traditionally rely on undocumented labor. The warning applies to green card holders and undocumented workers alike.

“Policy-wise, the Department of Homeland Security doesn’t see marijuana any differently than heroin, cocaine, or meth,” said Valerie Lopez, a Los Angeles-based immigration and criminal defense attorney. She advises any green card holder to refrain from working in a cannabis business for at least five years before applying for citizenship.

No hard data exists on how many times legal marijuana use has led to deportation, denial of citizenship, or cancellation of a visa. There are more than 11 million undocumented immigrants in the US, according to the Pew Research Center. Since Trump took office in January, a miniscule proportion—slightly more than 35,000 people, according to an ICE official—have been removed from the country. But there are fears that that number could increase rapidly.

Last month, DHS published a memo outlining new priorities for immigration control. Instead of violent criminals, “If you display any kind of conduct that is indicative of some trait the government doesn’t like, you can be deported,” Lopez said. “And one of them is drug and alcohol abuse.”

As it was before Trump took office, most deportations begin with a brush with law enforcement. Any offense that would lead to an arrest, booking, and subsequent fingerprinting can alert immigration officials, who may then intercept the undocumented person at jail or in court. The person is then sent to a detention center for a hearing before a federal immigration court.

For visa applicants, the process is much briefer: a summary denial and a return flight home.

Those seeking citizenship are subjected to a lengthy examination, given under oath. Either an admission of drug use or a denial later revealed to be untruthful—perjury—is enough to derail the application process and bar entry into the US.

With legal cannabis more popular and prevalent than ever before, Nightingale said, US customs officials asking about marijuana “is an increasing problem that we’re pretty sure, under Trump, is only going to get worse.”

This is the first in a three-part Leafly News series on the Trump administration’s recent cannabis policy changes and how they’re affecting travelers, immigrants, and legal residents who cross the US border. Coming tomorrow: The story of one legal immigrant caught up in the new zero-tolerance era.

Part one
ICE Uses a Cannabis Misdemeanor To Arrest, Deport
Part two
How to Stay Legal at the Border and Beyond
Part three
Under Trump, Legal Cannabis Is a Deportable Offense
Sign up for more Leafly news
Thank you for subscribing!