Women and weed: A history of cannabis and women’s health

A trophy-shaped organ deserving of such a merit, the uterus does so much more than house developing humans. This muscular organ has its own nervous system, unique networks of arteries and four kinds of ligaments. It sheds its inner lining—the endometrium—about every 28 days over 40-ish years (a.k.a. periods). It stretches to accommodate a growing fetus, contracts in active labour to push the baby out, then continues contracting to shrink back down to its original, fist-sized form.

All of these feats of the uterus, while remarkable, involve pain—a lot of pain—and that’s assuming a healthy organ without complications. But like the rest of the human body, a uterus is carpeted with endocannabinoid receptors, making cannabis a solid option for all that ails it. And for millennia, right up until 20th century prohibition, that’s just what people did.

Here are just some of the recorded ways cannabis has been used to treat uterine conditions throughout history, and how these remedies are used today:

Nineteenth century Western physicians had a lot to say about cannabis and period-related problems. This was likely inspired by the reigning Queen Victoria, who reportedly had wicked menses.

It should also be noted this timeframe coincides with the British Raj, when eager Western doctors traveled throughout the Indian subcontinent, picking up centuries-old cannabis folk remedies.

Check out Hemp Across Human History in This Timeline

While it’s unsubstantiated she herself took cannabis, it is likely Queen Victoria’s painful periods were treated with tinctures prepared by her personal physician, Sir John Russell Reynolds. After 30 years of working with the plant he declared it useful for cramps, among other things. “Indian hemp…is of great service in cases of simple spasmodic dysmennorhoea.”

Today, research physician assistant for Apollo Cannabis Clinics Kim Lam says when it comes to menstruation, pain is the number-one reason patients come in—and that cannabis definitely helps: “With physical cramping that women experience, CBD is well known to relax muscles and help with muscle spasms,” she says. “Big focus on CBD here but THC can also play a role in helping with sleep and increasing the effects of CBD.”

The first physician encouraged clinical trials just for period pain, writing “The failures are so few, that I venture to call it a specific in menorrhagia.” The second physician recounted successes from his own practice in India, claiming a cannabis tincture was “par excellence” for treating heavy bleeding, and even boldly claimed it helped doctors distinguish a bad period from early miscarriage. For the latter, he said cannabis had no effect (a good thing, if true).

Because we now know abnormally heavy bleeding (soaking one pad or tampon within an hour) can be a symptom of many different issues, from a hormone imbalance to possibly cancer, it’s important to see a healthcare provider to find out the underlying problem instead of just treating the bleeding.

“Today we do not want cannabis to cross the placenta in any way, shape or form,” says Dr. Arash Taghvai, manager of clinical affairs at Apollo clinics. There are too many unknowns for the long-term health of a developing fetus, so you won’t find any medical professional doling out cannabis for things like nausea or swollen ankles—at least not in Canada and the United States. But ages ago, cannabis was a widely used remedy.

In his book Smoke Signals, Martin A. Lee writes a longstanding folk remedy from Germanic regions was to use “sprigs of the mighty fiber over the stomach and ankles of pregnant women to prevent convulsions and difficult childbirth.” Ethnobotanist Dr. Ethan Russo cites a 9th century text from ancient Persia, the Al-Aqrabadhin Al-Saghir, that mentions cannabis to “calm uterine pains, prevent miscarriage, and preserve fetuses in their mothers’ abdomens”.

In 19th-century America, physician T.L. Wright claimed cannabis as especially helpful for vomiting during pregnancy, a condition when severe is called hyperemesis gravidarum that can endanger both mother and fetus (more recently suffered by Duchess of Cambridge, Kate Middleton).

Consuming Cannabis During Pregnancy: Here’s What the Science Says

In 1862 he wrote: “I found the vomiting completely arrested by cannabis indica, given in repeated doses of three grains every four hours, until several doses were taken.” But again, cannabis is not advised today while pregnant.

Now clinically confirmed to relieve pain, it makes sense that cannabis was widely used historically to facilitate agonizing childbirth. Dating back to at least 1500 BCE, a passage in the ancient Egyptian medical text, Ebers Papyrus, describes cannabis as a medicine for active labour. Women of the Roman elite (roughly 600 BCE to 500 CE) are also said to have used cannabis to alleviate labour pains.

In 1992, the remains of a 14-year-old girl dating back to the 4th century was found in a cave outside Jerusalem. Researchers, discovering she died while giving birth, also found ashes in her abdominal area containing THC. They concluded she inhaled cannabis in an effort to help what was likely excruciating labour.

Back to Victorian England, Sir Alexander Christison studied cannabis extensively, publishing in 1851 that it “increased the force of uterine contraction”, helped dilate the cervix, did not induce sleep, worked quickly, and that “Indian hemp may often prove of essential service in promoting uterine contraction in tedious labours.” In 1854, The Dispensatory of the United States noted cannabis could “hasten childbirth” without anaesthesia, while a South African herbalist was documented in 1906 as assisting childbirth by “getting his patient stupefied by much smoking of dagga”.

However, both Lam and Taghvai at Apollo clinic are firm that cannabis is not a safe option during active labour because of the unknown effects on both mother and baby. “Research for that is also difficult,” adds Lam. “We wouldn’t want to put anyone at risk.” 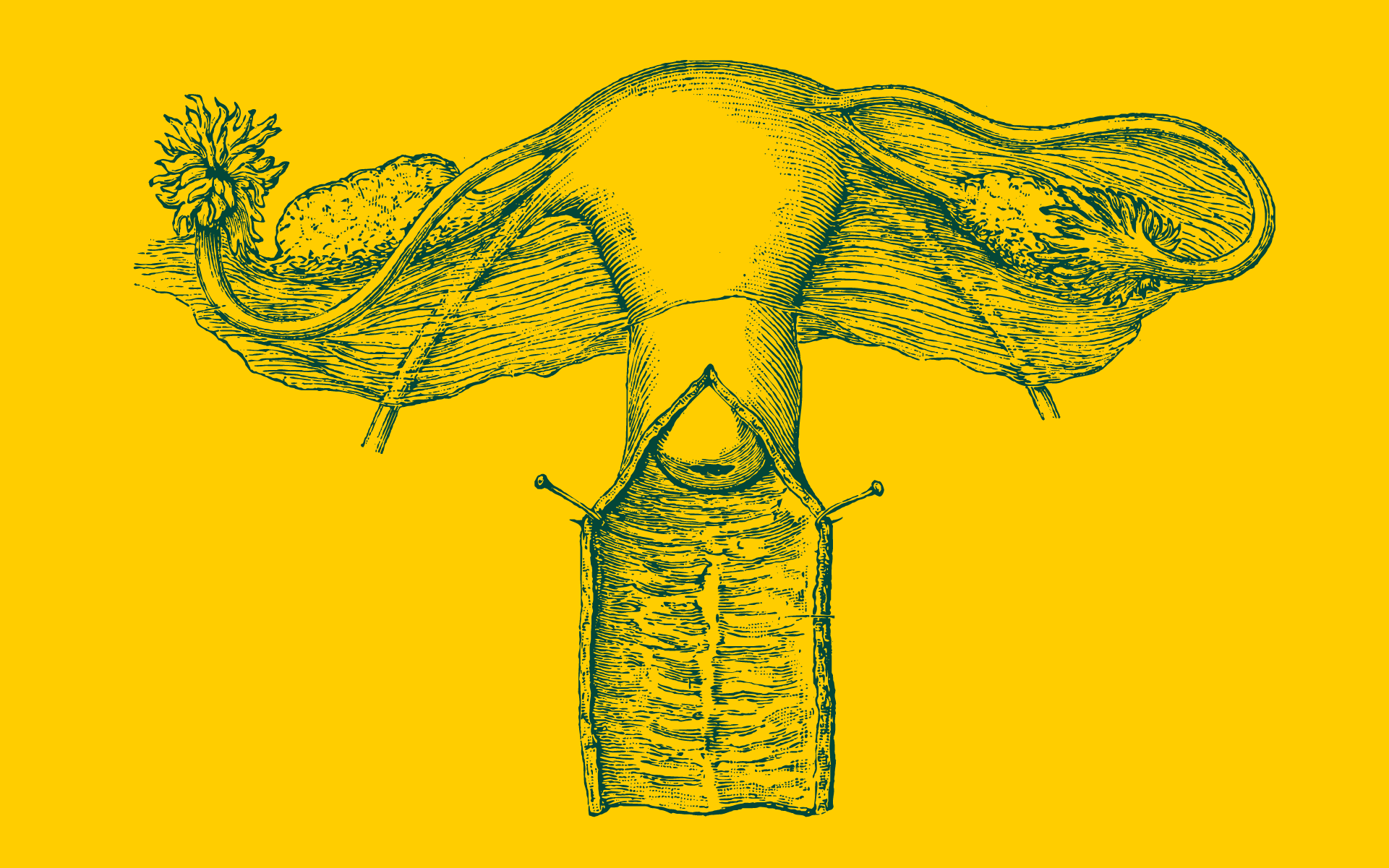 19th century physicians neatly summed all uterine growths and irregularities as “organic mischief”. But this didn’t stop the treatment of mysterious uterine pains throughout the ages.

Early medicine wouldn’t have known much about things like fibroids, endometriosis, uterine polyps, poly-cystic ovarian syndrome (PCOS) or even cancer, and nineteenth-century physicians neatly summed all uterine growths and irregularities as “organic mischief”. But this didn’t stop the treatment of mysterious uterine pains throughout the ages—the Kräterbuch of Tabernaemontanus, a 1564 medical text from Germany, stated “women stooping due to a disease of the uterus were said to stand straight again after having inhaled the smoke of burning cannabis.”

From Azerbaijan, a former Soviet republic, is a 17th-century reference of Muhammad Riza Shirwani treating uterine tumours with hempseed oil. Dr. Grailey Hewitt, past president of the Obstetrical Society of London, published a medical text in 1872 endorsing cannabis for uterine cancer as well as painful periods and heavy bleeding. He went on to compare cannabis to other painkillers of the day such as belladonna, opium, and chloroform, calling “Indian hemp” a better option.

For Lam, cannabis is an effective treatment for uterine pain, especially endometriosis. “We see so many endometriosis patients using cannabis in a variety of forms for their symptoms,” she says, noting vaginal suppositories are hugely popular for treating symptoms. Although clinical proof is still limited—and suppositories aren’t yet readily available in Canada—she says the anecdotal evidence from patients reporting relief is encouraging. In addition, Taghvai says using suppositories will not induce euphoria since the cannabis isn’t metabolized by the liver.

The word “menopause” wasn’t even used until 1821 when a French physician coined the term. Before then, physicians and healers treated strange conditions that could have been menopause-related, such as hysteria, furor uterinus, wandering womb, and vapors. But menopausal signs such as sleeplessness, hot flashes, and vaginal dryness weren’t typically recorded as symptoms of a larger midlife change until later.

However, by 1924, forgotten American medical tome Sajou’s Analytic Cyclopedia had recommended cannabis as an analgesic for all things menopause. Earlier in Boston, physician J.W. Farlow published his recommendations for cannabis in 1889 to ease more detailed menopausal symptoms: “the excitement, the irritability, and pain in the neck of the bladder, flashes of heat, and cold”. Farlow’s prescription was a rectal cannabis suppository, which he also recommended for unmarried women suffering from period pain (and yet, he prescribed married women of childbearing years vaginal suppositories—?).

We Can’t Avoid Menopause But Cannabis Makes It Easier

Today, Taghvai describes menopause as an array of conditions that affect the body based on a lack of estrogen. “THC or CBD are not going to help with that hormone, but they will help with symptomology,” he explains. “If patients come in saying they’re having very bad days, migraine headaches, mood swings, temperature fluctuations—all of these things can be controlled, dulled, and helped with the use of cannabis-based medications.” He says while menopause takes time, eventually the unwanted symptoms dissipate and no longer need treatment. “The body will come back to homeostasis, and until that happens, cannabis can help.”

Colleen Fisher Tully is a freelance writer and editor with recent work in Clean Eating, Today's Parent, The Walrus and Local Love. She posts random thoughts on Twitter @colleenftully