Lisa RoughSeptember 21, 2016
Share
Share on Twitter   Share on Facebook
Print
It’s a simple fact that everyone loves Bill Murray. The wry actor is known for crashing parties, singing karaoke with strangers, surprise bartending, and, once upon a time, getting busted with 10 pounds of cannabis.

Before he was the famous face we know today, before Saturday Night Live, before Groundhog Day and Caddyshack, before his foray into indie flicks with Wes Anderson, Bill Murray was just a young lad of 20 years old. It was, in fact, his birthday: September 21st, 1970.

He was preparing to fly to Denver back to Regis University, where he was enrolled in a pre-med course. Ever the jokester, he cracked one about having two bombs in his suitcase. A ticketing agent didn’t find his joke particularly hilarious and called over U.S. marshals.

A frantic Murray tried desperately to stash his cannabis-laden suitcase in a storage locker, but it was too late. The U.S. marshals found five two-pound bricks of cannabis with an estimated value of $20,000 that he had planned on selling. He was arrested by Chicago vice officers, but not before swallowing the check of one of his clients. “That guy owes me his life and reputation,” he later remarked. 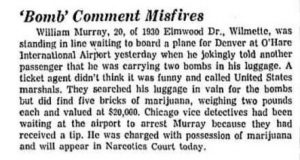 It was his first offense so Murray was spared jail time, instead being placed on probation for five years. This incident did, however, derail his college plans, and after discussing it with his family, he dropped out, although Regis later granted him an honorary degree in humanities.

“I think the terror of marijuana was probably overstated.”
Bill Murray

Murray moved to New York City in 1974 and was invited by John Belushi to join The National Lampoon Radio Hour as a featured player, which led to a brief stint on a variety show known as Saturday Night Live with Howard Cosell – a different “Saturday Night Live” than the SNL we all know and love, but he was soon recruited to the NBC show for the second season. He was a standout success on the show, delighting the audience with iconic moments like his crooning rendition of the Star Wars theme song.

Since Murray’s ties to cannabis that fateful day at O’Hare International Airport indirectly led him to his current successful career path, it’s fitting that he’s continued to have many cannabis moments in the following decades, both on and offscreen.

In Caddyshack, his character Carl Spackler describes some “grass” he’s grown as a hybrid cross of “Bluegrass, Kentucky Bluegrass, Featherbed Bent, and Northern California Sensimilla.” He then insists on lighting up a “big Bob Marley joint” for Chevy Chase, who promptly hacks up a lung while Murray looks on with a bemused smirk. “It’s a little harsh,” he shrugs.

Later, Chevy Chase reminisced on one late night when Murray pounded on his door at 3:00 a.m. looking for cannabis. They eventually found some, but as Chase described it, it was “a sandwich bag full of basically just seeds.”

As Murray’s comedy matured, so did his choice in roles, although his love of cannabis has remained ever-present.  He joined forces with indie filmmaker Wes Anderson, and from The Royal Tenenbaums to Moonrise Kingdom, he has become a beloved star of the indie scene.

In The Life Aquatic with Steve Zissou, art imitates life as Murray’s Zissou gets some shocking news and takes a break to take a toke on the bow of the ship to the glorious tune of David Bowie’s “Life on Mars.”

Murray has described the quiet Jim Jarmusch movie Broken Flowers as one of his favorite filming experiences. In the film, he demonstrates his cannabis prowess while sharing a joint with the neighbor, nodding sagely and remarking, “It’s just cannabis sativa.”

In Zombieland, Murray appears as himself in a hilarious cameo, joining up with a group of zombie apocalypse survivors who have hold up at his Hollywood mansion. They get stoned together and recreate scenes from Ghostbusters before Murray is mistaken for a zombie by Jesse Eisenberg’s character and killed.

A Reddit AMA that Murray participated in gave us his personal thoughts on cannabis. When asked how he feels about recreational marijuana, he shared a thought-provoking response.

“Well, that’s a large question, isn’t it? Because you’re talking about recreation, which everyone is in favor of. You are also talking about something that has been illegal for so many years, and marijuana is responsible for such a large part of the prison population, for the crime of self-medication. And it takes millions and billions of dollars by incarcerating people for the crime against oneself as best can be determined. People are realizing that the war on drugs is a failure, that the amount of money spent, you could have bought all the drugs with that money rather than create this army of people and incarcerated people. I think the terror of marijuana was probably overstated.

“The fact that states are passing laws allowing it means that its threat has been over-exaggerated. Psychologists recommend smoking marijuana rather than drinking if you are in a stressful situation. These are ancient remedies, alcohol and smoking, and they only started passing laws against them 100 years ago.”