David BienenstockApril 19, 2019
Share
Twitter   Facebook
Print
This Wednesday, May 10, 2017 photo shows a display of buttons in the exhibit "The Summer of Love Experience, Art, Fashion and Rock and Roll" in Golden Gate Park at the deYoung Museum in San Francisco. (Eric Risberg/AP)

If you want to take a deep dive into the incredible origin story of 4/20, Leafly has got you covered. But while the Waldos deserve both credit and praise, a lot more went into the global proliferation of this grassroots phenomenon than just five friends meeting up to get blazed at 4:20 p.m. every day. Creating an annual high holiday from scratch has been a team effort.

Some of what follows may seem silly or irrelevant or even borderline absurd, particularly given the terrible history of cannabis prohibition in the United States and around the world. But I would argue that it’s absurdity with a purpose. And really, how else can you respond to the utter absurdity of jailing people for possession of a beneficial plant?

Yes, of course, reasoned arguments and statistical data have their place in fomenting political change, and we never could have gotten this far in the legalization movement without them. But all the same salient facts existed back in 1971, when a Harvard Medical School professor named Dr. Lester Grinspoon published his seminal book, Marihuana Reconsidered.

Grinspoon originally set out to research the subject in an effort to convince his best friend, famed astronomer Carl Sagan, to stop smoking so much weed. Instead, the good doctor came away convinced that the government’s case against cannabis was based on lies and propaganda. Assuming that an impeccably sourced scholarly work exposing this terrible injustice would lead to rapid societal change, he first gave a private mea culpa to his best bud, then set out to share his findings with the world.

Why Scientist Carl Sagan Embraced Cannabis Throughout His Lifetime

Carl and I used to review each other’s manuscripts before they were published. When he read Marihuana Reconsidered, he said, “That’s a wonderful book, but you made one big mistake. You said in the last chapter that marijuana prohibition will end within 10 years. But it’s going to be gone in two years. It just can’t survive any longer than that!

That conversation, between two brilliant and esteemed academics, took place nearly 50 years ago, back when Gallup—which had just begun polling the issue—reported that less than 15% of Americans supported legalization. The subsequent publication of Marihuana Reconsidered certainly changed a lot of people’s minds and proved to be an incredible resource for pushing back against the government’s propaganda, but aside from a few states experimenting with decriminalization, not much happened right away.

420 started with a treasure map 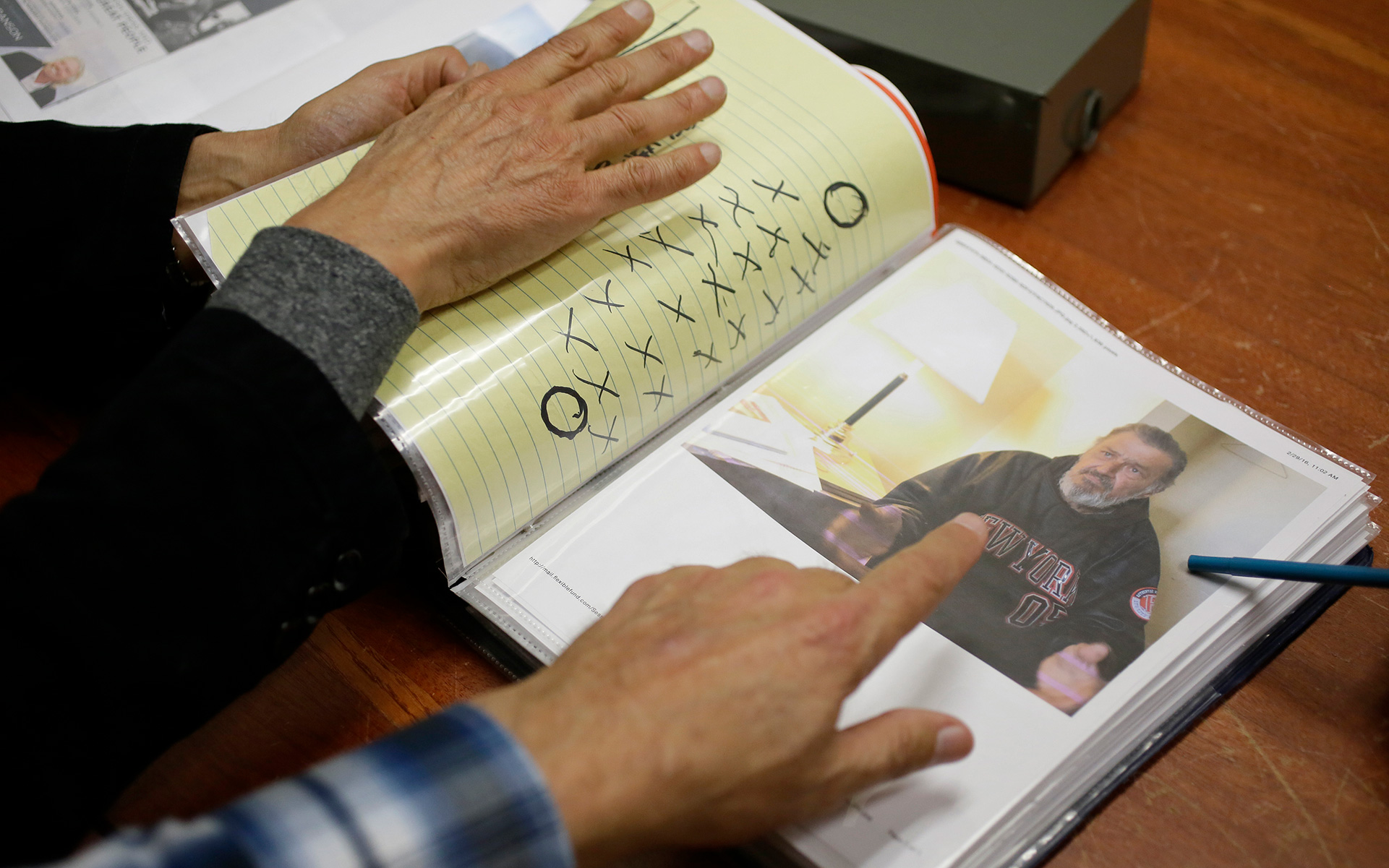 In this Friday, April 13, 2018, photo, Waldos Steve Capper, left, and Dave Reddix, right, look over a memorabilia book showing a treasure map to a Point Reyes Peninsula marijuana patch, drawn by a Coast Guard reservist, shown in book at right, in a bank vault in San Francisco. Friday is April 20, or 420. That’s the numerical code for marijuana’s high holiday, a celebration and homage to pot’s enduring and universal slang for smoking. And five Northern California high school stoner buddies widely credited with creating the shorthand slang for getting high nearly 50 years ago now serve as the day’s unofficial grand masters. (AP Photo/Eric Risberg)

The same year Dr. Grinspoon published his groundbreaking book, a small group of young people known as the Waldos first gathered together at 4:20 in the afternoon, in San Rafael, California. They met beneath a statue of Louis Pasteur to get high and set off on a grand adventure. They had no specific political agenda that day, but their collective act of subversion against an incoherent law was in a grand American tradition of peaceful dissent.

In his classic essay Civil Disobedience, Henry David Thoreau wrote that “if a plant cannot live according to its nature, it dies; and so too a man.”

The Waldos lived according to their nature in a way that other people found compelling enough to emulate. Over a long period of time, and after many strange twists and turns, their daily ritual would grow into a kind of meme within cannabis culture. And then it would evolve again, into a flag to gather under, both in protest and in celebration.

The long, strange history of 4/20, the global cannabis holiday

Along the way, the rise of 420 paralleled a growing acceptance of cannabis in society, including among people who choose not to consume it. Ultimately, 420 has grown into an annual holiday, something that every culture—particularly one that’s faced oppression, marginalization, and shaming—needs in order to publicly assert its own pride and sense of identity.

So fire one up and hop on the bus for a detour-laden timeline of 420 throughout cannabis history. 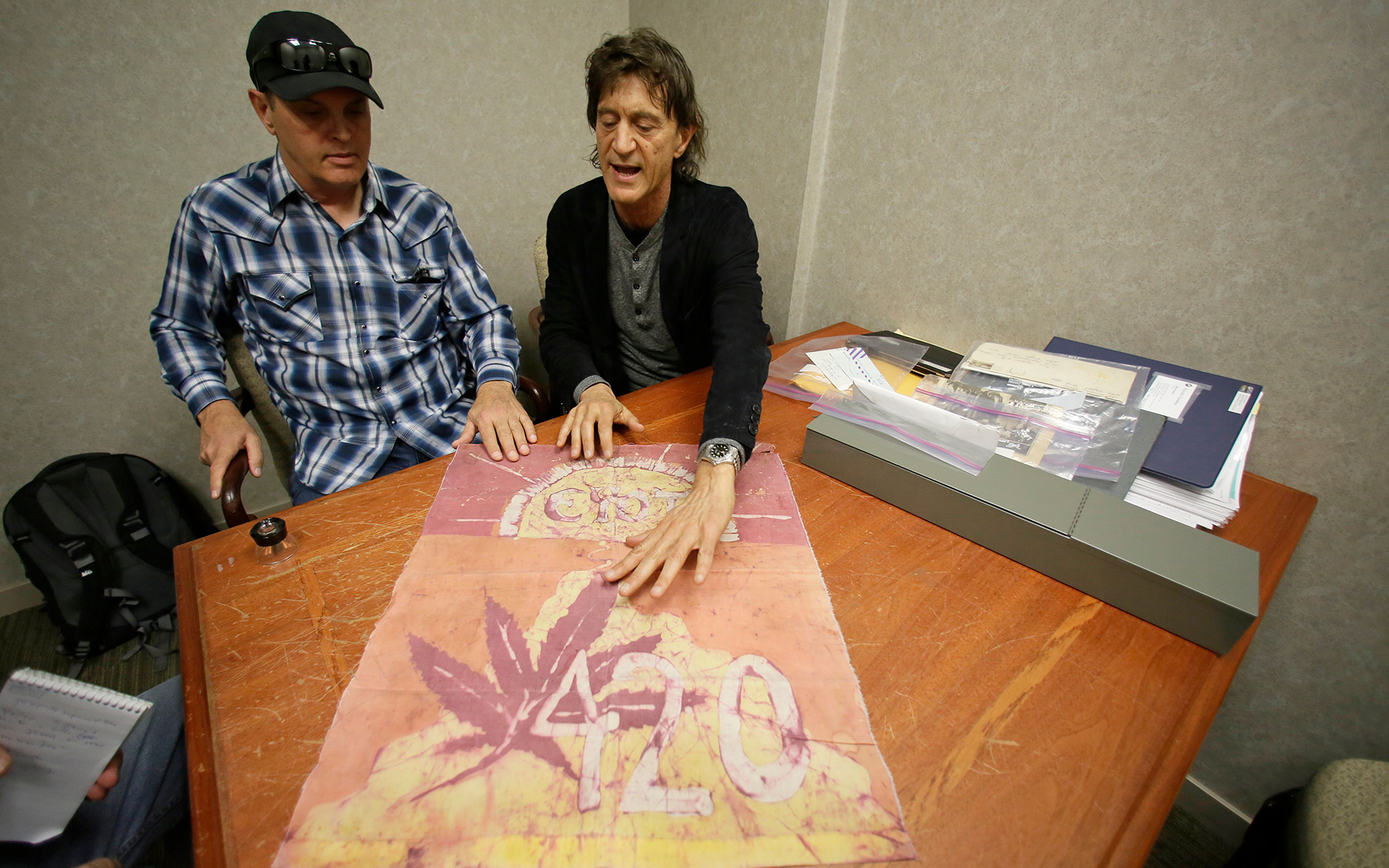 In this Friday, April 13, 2018, photo, Waldos Dave Reddix, left, and Steve Capper look over a 420 flag from 1972 made by a classmate that is kept at a bank vault in San Francisco. Friday is April 20, or 420. That’s the numerical code for marijuana’s high holiday, a celebration and homage to pot’s enduring and universal slang for smoking. And five Northern California high school stoner buddies widely credited with creating the shorthand slang for getting high nearly 50 years ago now serve as the day’s unofficial grand masters. (AP Photo/Eric Risberg)

The Waldos take possession of a crudely drawn treasure map to a small patch of cannabis in a remote stretch of wilderness near the Point Reyes Lighthouse. They assemble each day after school at 4:20 p.m. to search for the secret garden, which was abandoned by its original grower after he grew paranoid about being under government surveillance.

Check out “The Long, Strange History of 420″ for a thorough accounting of what happened next, but the TL;DR version is that 420 developed into a kind of underground code for cannabis—at first strictly among the Waldos, then by the Grateful Dead’s Deadheads, who carried the custom with them as they followed the band on their never-ending national tours.

High Times editor Steve Bloom is hanging around outside a Grateful Dead show in Oakland, California, when he’s handed a flier soliciting people to “meet at 4:20 on 420 for 420-ing in Marin County at the Bolinas Ridge sunset spot.” The flier also offered (an incorrect) explanation for the code, one that didn’t mention the Waldos.

420 started somewhere in San Rafael, California in the late ‘70s… as the police code for Marijuana Smoking in Progress. After local heads heard of the police call, they started using the expression 420 when referring to herb – Let’s Go 420, dude!

Intrigued, Bloom printed the flier in its entirety in High Times, not as some significant communique meant to spark a revolution, but as a kind of goofy artifact he brought home from the Dead lot. And yet, it struck a chord and spread the meme to entirely new adherents. 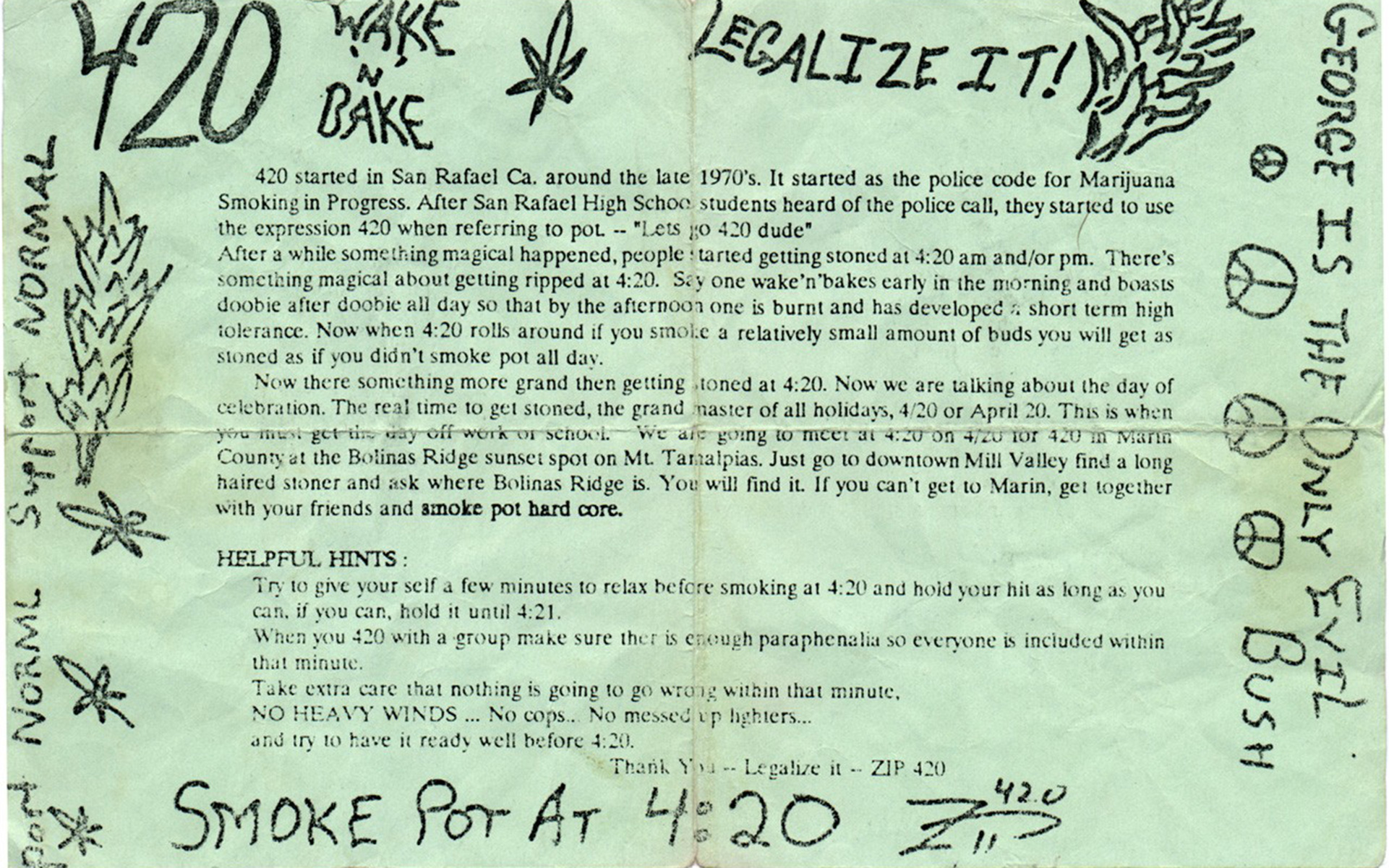 Cannabis Action Network (CAN) spent the early 1990s handing out fliers promoting the medical utility of cannabis and the industrial utility of hemp to roughly five million concertgoers back in a pre-internet era when such information was difficult to access.

Then they organized an event at Maritime Hall in San Francisco that’s considered the very first public 420 celebration. Featuring the premiere performance of the Long Beach Dub All-Stars, the event went from 4:20 p.m. to 4:20 a.m., and was, in CAN co-founder Debby Goldsberry’s fond recollection, “completely nuts”:

The line outside was over 500 people, before we even opened. We had a hemp seed cafe, small acts in the bar, thirty or so booths in the expo hall, and an incredible line up of local and national musicians playing upstairs. The place was absolutely off the hook… 420 was different back then, as we were all powered up on the drive to end prohibition. Now, 420 can feel a little played out—been there, done that. It’s still fully worth celebrating though! 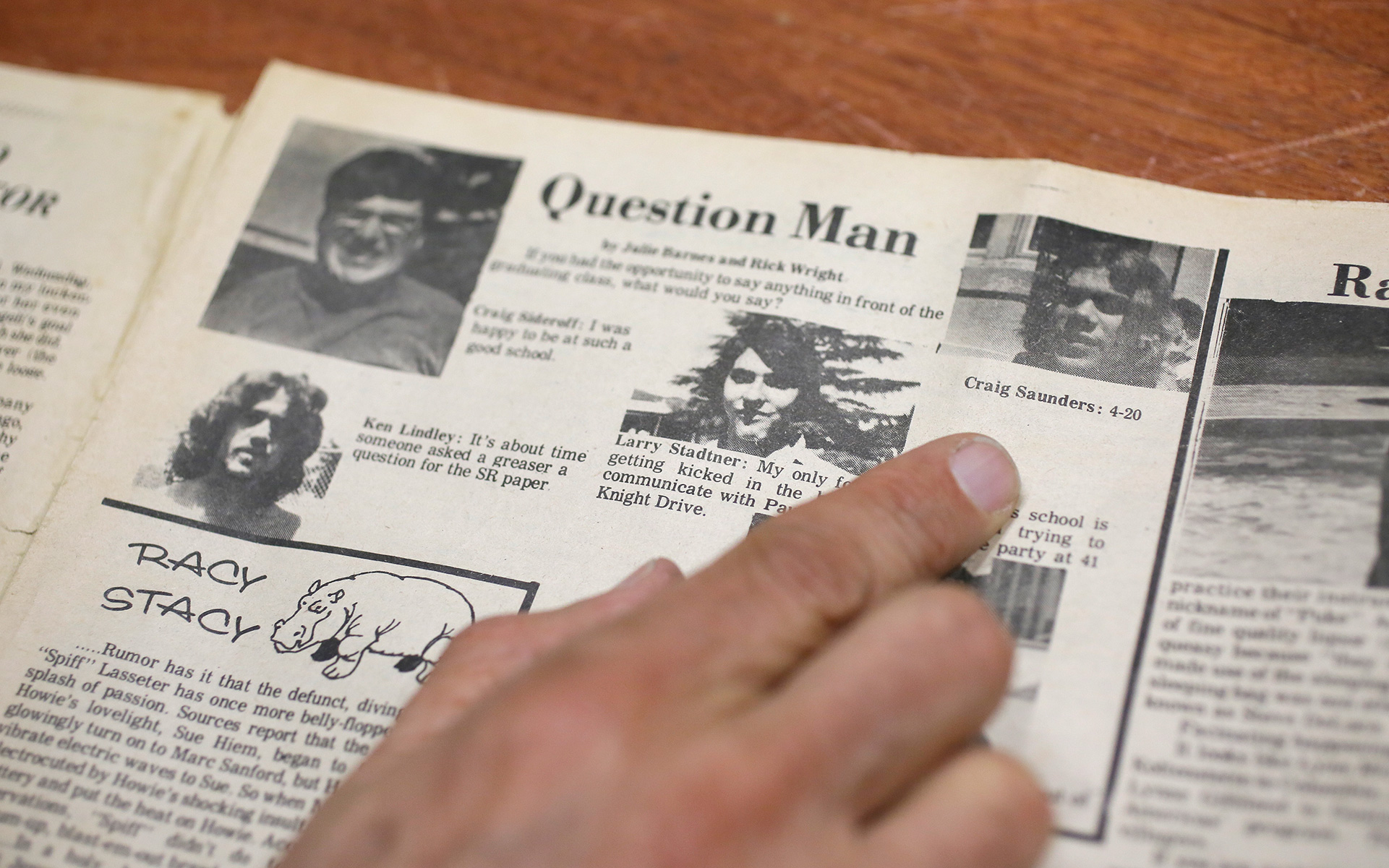 This Friday, April 13, 2018, photo shows a San Rafael High School newspaper from June 1974 referencing 420, that is stored at a bank vault in San Francisco. Friday is April 20, or 420. That’s the numerical code for marijuana’s high holiday, a celebration and homage to pot’s enduring and universal slang for smoking. And five Northern California high school stoner buddies widely credited with creating the shorthand slang for getting high nearly 50 years ago now serve as the day’s unofficial grand masters. (AP Photo/Eric Risberg)

More than 25 years after their first legendary 4:20 sesh, the Waldos go public and stake their claim to history. They produce an impressive amount of documentation to back up their story, including 420 mentions in their yearbook, and dated letters making explicit their use of the code to represent cannabis.

They all still live in the San Rafael area and remain close friends.

Evan Goding didn’t take long to decide the amount of his first bid on The Price Is Right, one of the longest running game shows on daytime television.

And he keeps bidding 420, “always and forever.”’ It’s worth watching.

Canada’s health minister uses an April 20 (420) speech at the United Nations to announce a timeline for nationwide legalization.

A bunch of cops in Minnesota decide to waste taxpayer resources on a dumb 420 “stoners love Doritos” Twitter joke photo that inadvertently exposes the incredible hypocrisy behind the entire war on cannabis. Because if—as the picture implies—consuming cannabis leads to harmless behaviors like snacking and gaming, then why are we arresting and imprisoning people?

Undercover #420 operations are in place. Discreet traps have been set up throughout the city today. #Happy420 pic.twitter.com/Jo8mh0Z5lQ

And would the cops ever make light of murder, arson, or armed robbery? Or heroin or meth, for that matter? Of course not.

The only reason they feel free to crack weed jokes on 420 with the rest of us is because, in the depths of their hearts, they know it’s relatively harmless.

Ex-Cops Are Cashing in on Cannabis. Is That Okay? 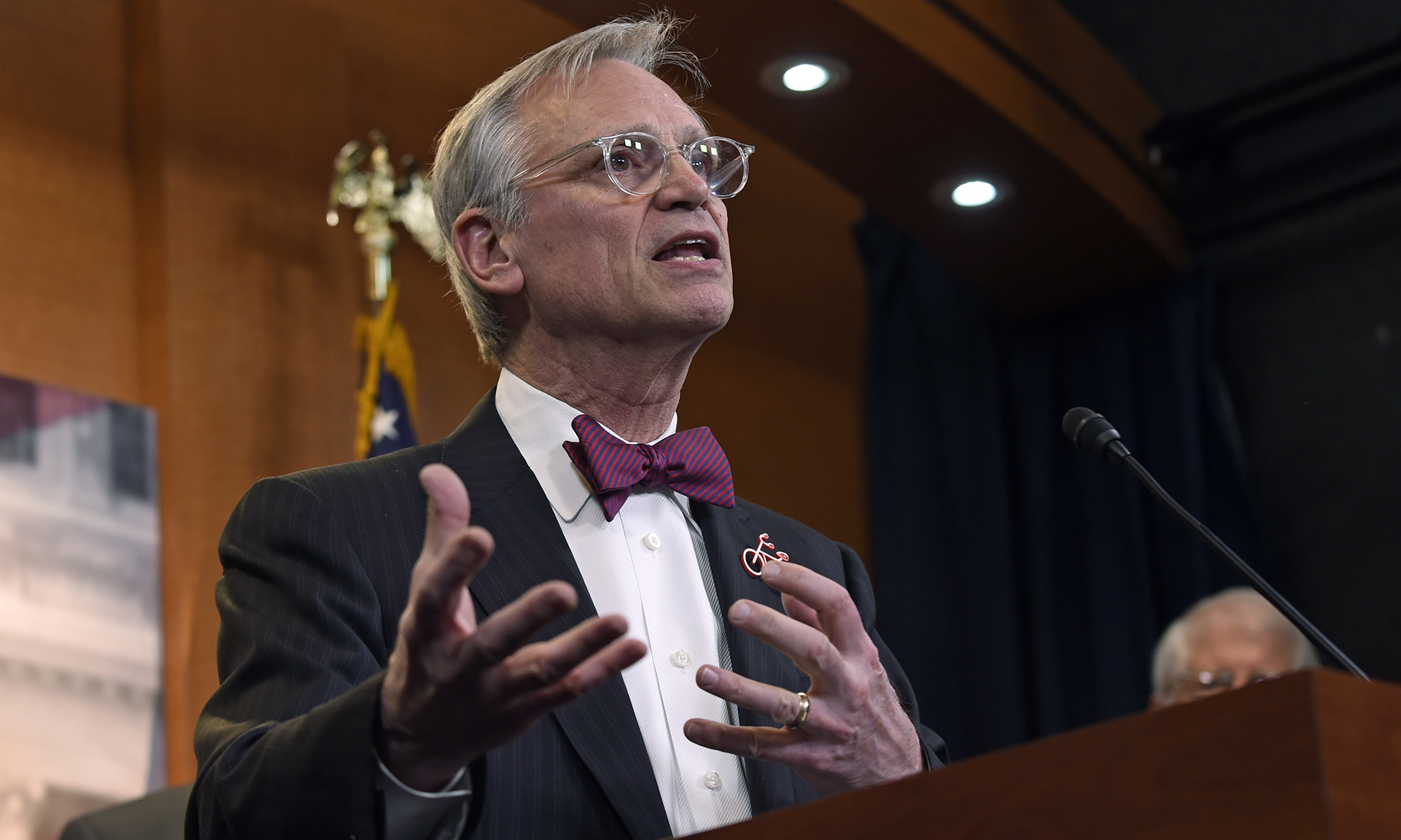 Oregon representative Earl Blumenauer introduces HR 420 (the Regulate Marijuana Like Alcohol Act) in Congress, a bill designed to remove cannabis from the Controlled Substances Act and grant individual states the authority to regulate it as they see fit.

There’s a Mess of Legalization Bills in Congress. Here’s What Really Matters

So what’s missing from this chronic chronology of 420? A lot. Most importantly, your own best 420 memories. Including the ones you’ll make this year.