As the state’s Question 1 campaign — adult-use cannabis legalization — has made its way toward the November ballot, Maine Gov. Paul LePage has opined against the idea. But not in a serious way. “I don’t smoke it, so I don’t care,” he said at a Bangor town hall meeting earlier this year.  Honestly, the math seemed to throw him. “I can’t figure out how you are going to tax something you grow in your backyard, I just can’t figure that out,” he said, as his counterparts in Colorado, Washington, and Oregon socked away tens of millions of dollars in new revenue.

Until last week, the folks behind Question 1 harbored worries about LePage. They feared a late-in-the-race surge of outspoken opposition from the governor might sway certain undecideds. Then LePage went LePage, and all those fears vanished. In the space of three days last week, LePage’s opposition went from a strike against legalization to a major benefit for the adult-use vote. “The support we need is from a majority of Maine voters,” David Boyer, spokesman for Maine’s Campaign to Regulate Marijuana Like Alcohol, told Leafly. “And thankfully, the people are ahead of the politicians on this issue.” At this point, the “No on 1” folks aren’t gonna want to touch the governor with a 10-foot pole, either.

Let me catch you up on the happenings. During a town meeting on Wednesday night in North Berwick, the governor admitted to obsessively maintaining a three-ring binder stuffed with news clippings and press releases detailing arrests connected to Maine’s opioid abuse epidemic. Then he topped off the tale with a boldfaced lie, asserting that more than 90 percent of those busted were African-American and Hispanic men from out of state. 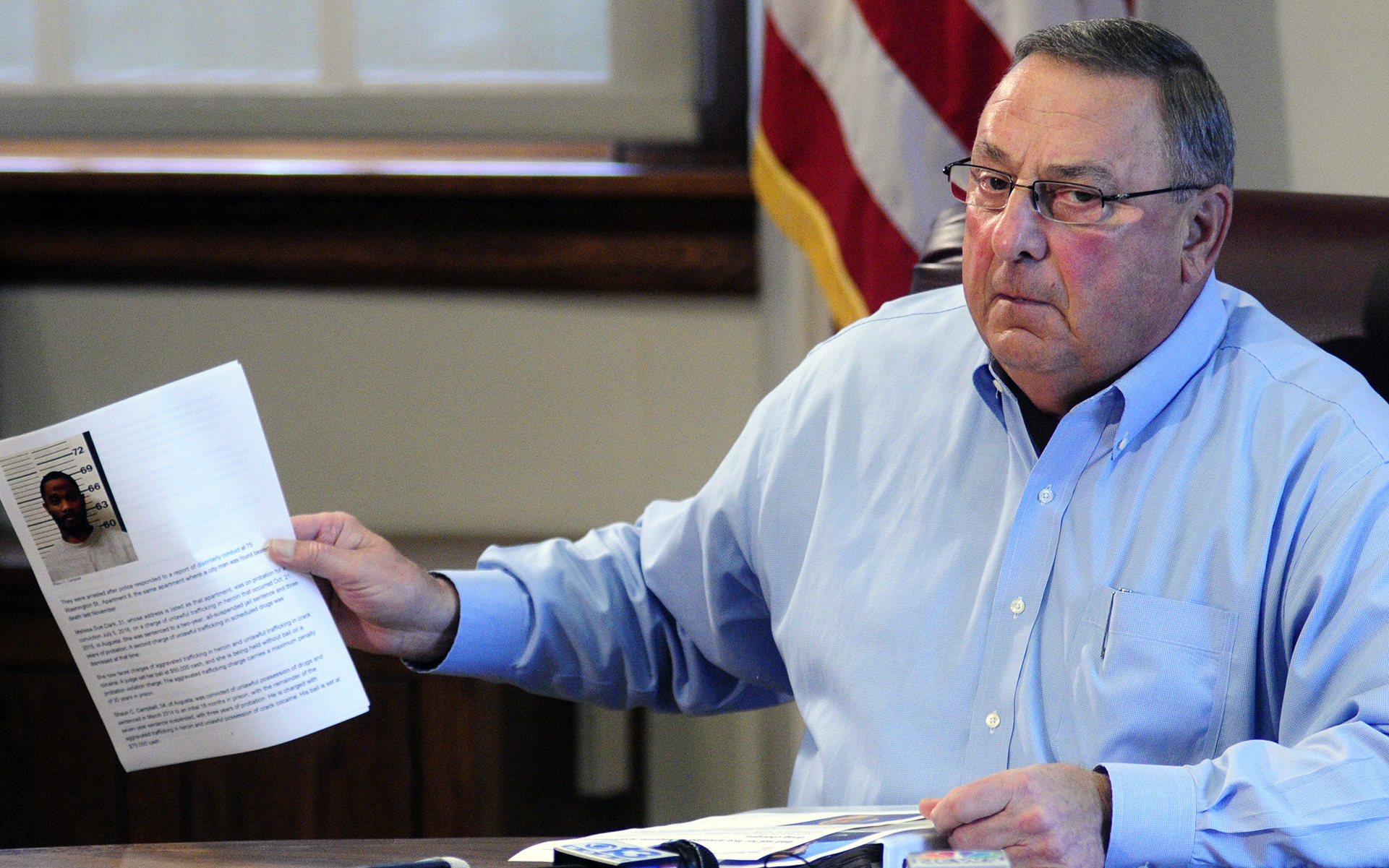 Maine Gov. Paul LePage holds up news release with a booking mug shot from a three-ring binder of news releases and articles about drug arrests during a meeting with reporters on Friday, Aug. 26, 2016, in the State House Cabinet room in Augusta, Maine. Joe Phelan /The Kennebec Journal via AP

Which is false. According to FBI crime stats from 2014, only 14 percent of the 1,211 drug crime convictions in Maine were of black people. Even anecdotally, the dude is way off. Last week, for example, two different major drug arrests across the state featured locals with skin as white the inside of a Maine potato. In the Penobscot County town of Holden, a 30-year-old Caucasian male was nabbed with a 1,000 bags of heroin. In Sanford, down in southern Maine, a 27-year-old white guy with a beard got arrested carrying 10 grams of heroin, a loaded handgun, and a boot knife — after selling a heroin-fentanyl mix to an undercover cop.

But LePage is never one to let facts get in the way of his paranoid theories. Back in January, he spun tales of African-American and Hispanic men driving north from New York and Connecticut to peddle poison and “impregnate white girls.” Yes, those were his actual words. It’s like the dude’s a time traveler, dropped here from 1936 with pages from the Reefer Madness script.

‘I want you to make it public’

The guv seems to forget that our heroin-and-pill addiction epidemic was started by laboratory chemists in white coats at Purdue Pharma, makers and marketers of Oxycontin. They were enabled by white Maine doctors eager to write scripts that enriched Big White Pharma, followed by almost two decades of pain pill overprescription by the state’s practically 100 percent white medical industry.

Our executive-in-chief didn’t stop after North Berwick, though. The day after the binders-full-of-pushers revelation, Gov. LePage called up Drew Gattine, a Democratic state representative and frequent critic of the governor, and left a voicemail that’d make Alec Baldwin and Mel Gibson blush.

“Mr. Gattine, this is Gov. Paul Richard LePage,” the recording says. “I would like to talk to you about your comments about my being a racist, you cocksucker. I want to talk to you. I want you to prove that I’m a racist. I’ve spent my life helping black people and you little son-of-a-bitch, socialist cocksucker. You … I need you to, just friggin. I want you to record this and make it public because I am after you. Thank you.”

It really has to be heard for full effect. Fortunately the Portland Press Herald took the guv at his word and made it public, in all its uncensored glory.

Meanwhile, the ACLU of Maine filed a public records request for the governor’s instantly-infamous binder. 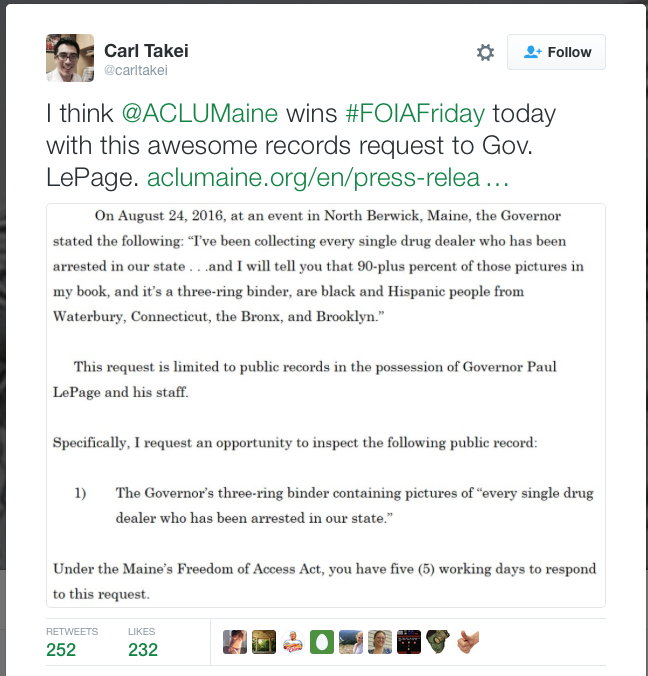 On Friday, LePage invited a Press Herald reporter and a TV crew from WMTW to the Blaine House, Maine’s governor’s mansion and LePage’s current known address. There he revealed his desire to challenge Gattine to a duel, with pistols, like in the olden days.

“I would point it right between his eyes,” LePage told reporters, “because he is a snot-nosed little runt and he has not done a damn thing since he’s been in this Legislature to help move the state forward.” The governor boasted confidently that, unlike Alexander Hamilton, he wouldn’t miss.

There are plenty of theories bouncing around Maine about the guv’s erratic behavior. Some of them involve mental frailty; others focus on the possible ingestion of foreign substances. Those, alas, are beyond our ability to investigate. So we turn to other reasons. How on Earth can this behavior be explained?

Perhaps LePage’s race-baiting rhetoric is intended, à la Donald Trump, to activate, enrage, and entertain his Tea Party cronies and further cement his solid reputation with the state’s redneck, racist, and tinfoil-hat-wearing voters. After all, LePage has threatened on several occasions to challenge Sen. Angus King, the state’s popular ex-governor and corporatist independent, who’s up for re-election in 2018.

Those who laugh at the thought of a “Senator LePage” would do well to examine the 2010 and 2014 elections, which propelled and then returned LePage to the governor’s mansion. The guy only got 37 percent of the vote the first time and 48 percent the second, but due to third-party spoiler (and Angus King crony) Eliot Cutler, LePage won both elections. A similar split could happen in the upcoming Senate race, especially if the Dems enter the fray with a sacrificial candidate strong enough to pose a semi-serious challenge to the grandfatherly millionaire and indie-incumbent King.

Or maybe LePage’s grandstanding is an attempt to distract the masses from his failures. After all, LePage and his administration have had less than zero impact on Maine’s overdose epidemic. The state’s drug prevention and treatment programs were cut $4.5 million in the last year, leading to a further shortage of detox programs and residential inpatient beds. His hand-picked “Maine Anti-Heroin/Opiate Initiative” has turned out to be another do-nothing commission. Just last month, LePage ordered staffers to reject the expansion of the medical marijuana program to allow recovering addicts to pursue cannabis therapy instead of methadone or suboxone.

The proof of LePage’s failure is in the numbers. A July poll by the Portland Press Herald showed that six in ten Maine residents have been negatively impacted by the opiate crisis. In 2015, 272 Mainers died due to overdose. In the first six months of this year, there’s already been 189 overdoses, so we’re on course to set a new record. For the third year in a row, heroin has surpassed pills as the leading cause of overdoses, seemingly in conjunction with the state’s attempts to curb doctor shopping through a non-mandatory prescription drug database. Unless a miracle happens, the death data is bound to get worse.

Absent an abdication, we’re stuck with LePage for two more years. Our only hope, it seems, is that his recent behavior horrifies lawmakers from both parties enough to immediately render him an impotent lame duck. Predictably, Maine Democrats are calling for the governor to step down. The state’s Republican leadership wants to meet with LePage before issuing judgment, though one prominent GOP lawmaker has suggested LePage might be suffering from substance abuse or mental health issues. Regardless of what the Legislature does, LePage has alienated enough folks around here to ensure that in the future, he’s not going to taken seriously by most.

On Saturday, as if to cap the week, Stephen King, the state’s beloved agitator and master-of-horror, tweeted what many Mainers were already saying.

Tough words, sure, but not as harsh as King’s comparison last year of LePage to shapeshifting, murderous Pennywise the Clown in his horror classic It. As of Monday evening, there was no word from the King estate about any voicemails from the governor. But the week’s just getting started. And so is the campaign.

Election 2016legalizationMaine
Sign up for more Leafly news
Thank you for subscribing!

Politics
Lobstah Chowdah and Local Green Bud: The Road to Legalization in Maine
Politics
Arizona’s Weird, Winding Journey Toward Legalization
Politics
Report from the Front: The Trouble with Cannabis in Indian Country