Round 4: The Strain Madness Championship

Leafly Staff March 20, 2019
Share
Share on Twitter   Share on Facebook
Print
While March Madness plays out on the court, we’ve got a competition on the sidelines. Welcome to Leafly’s Strain Madness, where you will decide which strain gets dubbed the champion of all cannabis.

Check back every day to find out which strain wins in each division, and vote every day to see your favorite strain through to the final round.

Welcome to the championship round of Leafly’s Strain Madness 2019! We’ve been following along, round-by-round, as your votes have decided which strains move on to the next matchup.

Finally, the time has come to crown our champion. This matchup will decide which strain—and terpene profile—reigns supreme.

Do you prefer Granddaddy Purple’s sweet, myrcene-dominant flavors, or are the sharp, gassy fumes of Sour Diesel more your style? Cast your vote now and read on below for a recap of how both of these popular cultivars fared in the early rounds. 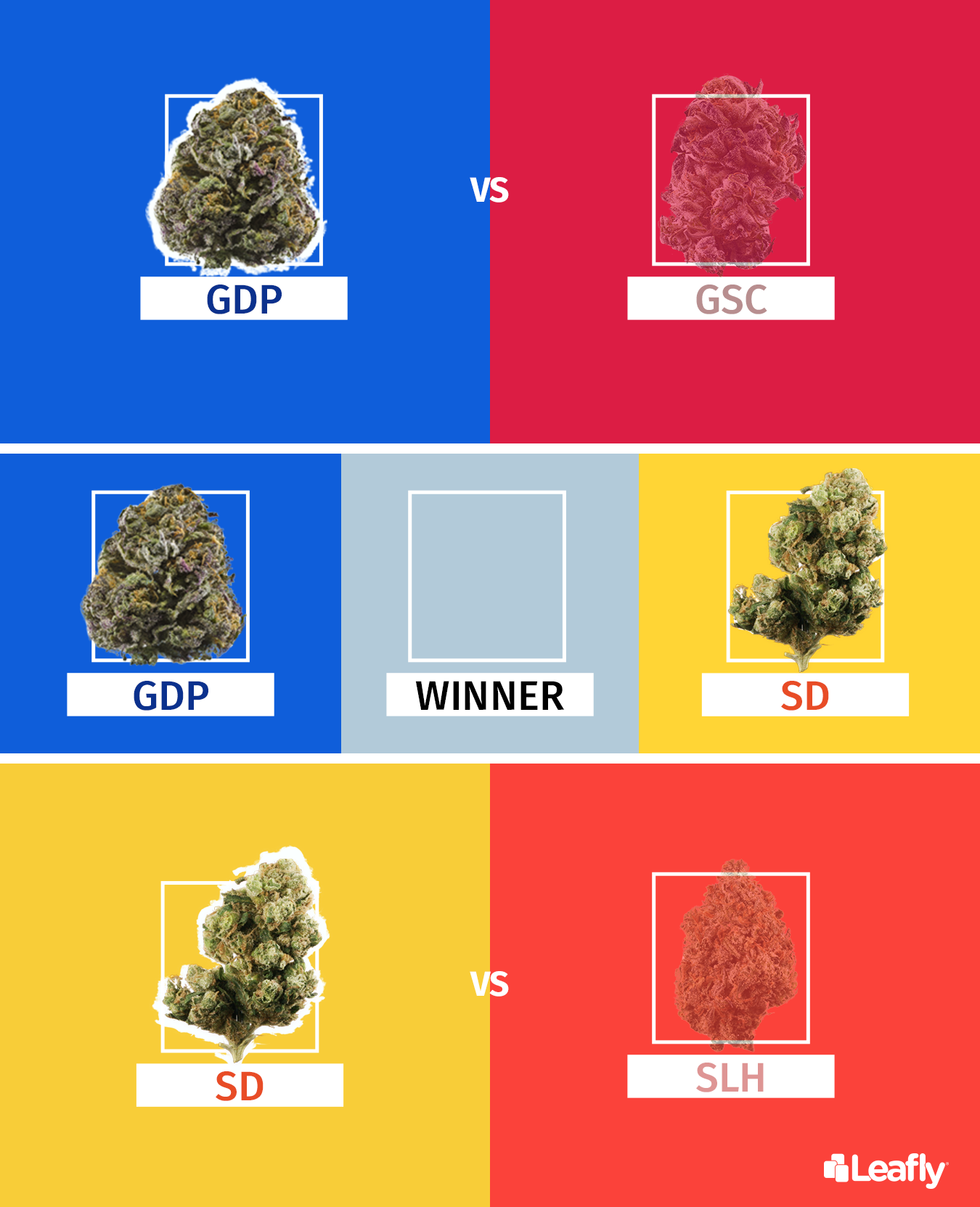 You Know What to Do: Vote!

The final matchup of Strain Madness comes down to two popular frontrunners. Granddaddy Purple and Sour Diesel both have well-respected legacies, and each has fared well throughout their early-round matchups.

GDP captured more than 73% of the vote through rounds one and two before getting off to a sluggish start in yesterday’s round three. A late push was enough for it to sneak by the normally unstoppable force of GSC.

Sour Diesel’s path to the championship was easy by comparison, but it faced a challenging matchup yesterday against Super Lemon Haze, which had also dominated the first two rounds as well.

Your Favorite Cannabis Strains and Their Main Terpenes

A vote for Granddaddy Purple is vote for the West Coast’s medical cannabis legacy. GDP was developed in California by breeder Ken Estes. It was selectively bred to provide effects that would combat common symptoms like chronic pain and appetite loss. Its rich purple hues and sweet berry flavors make it an enjoyable smoke, while its myrcene-dominant terpene profile provides deeply relaxing effects that are known to put you to bed.

Meanwhile, on the East Coast, Sour Diesel has carved out a legacy and a cult-like following. Its sharp, gassy flavors have been in such high demand over the years, it’s one of the most commonly counterfeited strains.

One thing is for certain: When you have the real Diesel, you know! Its signature fuel aroma blends with pungent earthy notes and subtle citrus highlights to create a one-of-a-kind flavor profile. Sour Diesel showcases cannabis’ range of stimulating effects. If the sleepy, mellow vibes of GDP aren’t your thing, then Sour D might be the strain for you.