The outlet is owned by Alexander Altman, a winner of the lottery that selected 25 applicants to open the first crop of stores in Ontario. It’s also the only legal store in Ajax, although Fabulous Leaf is set to open in nearby Oshawa. 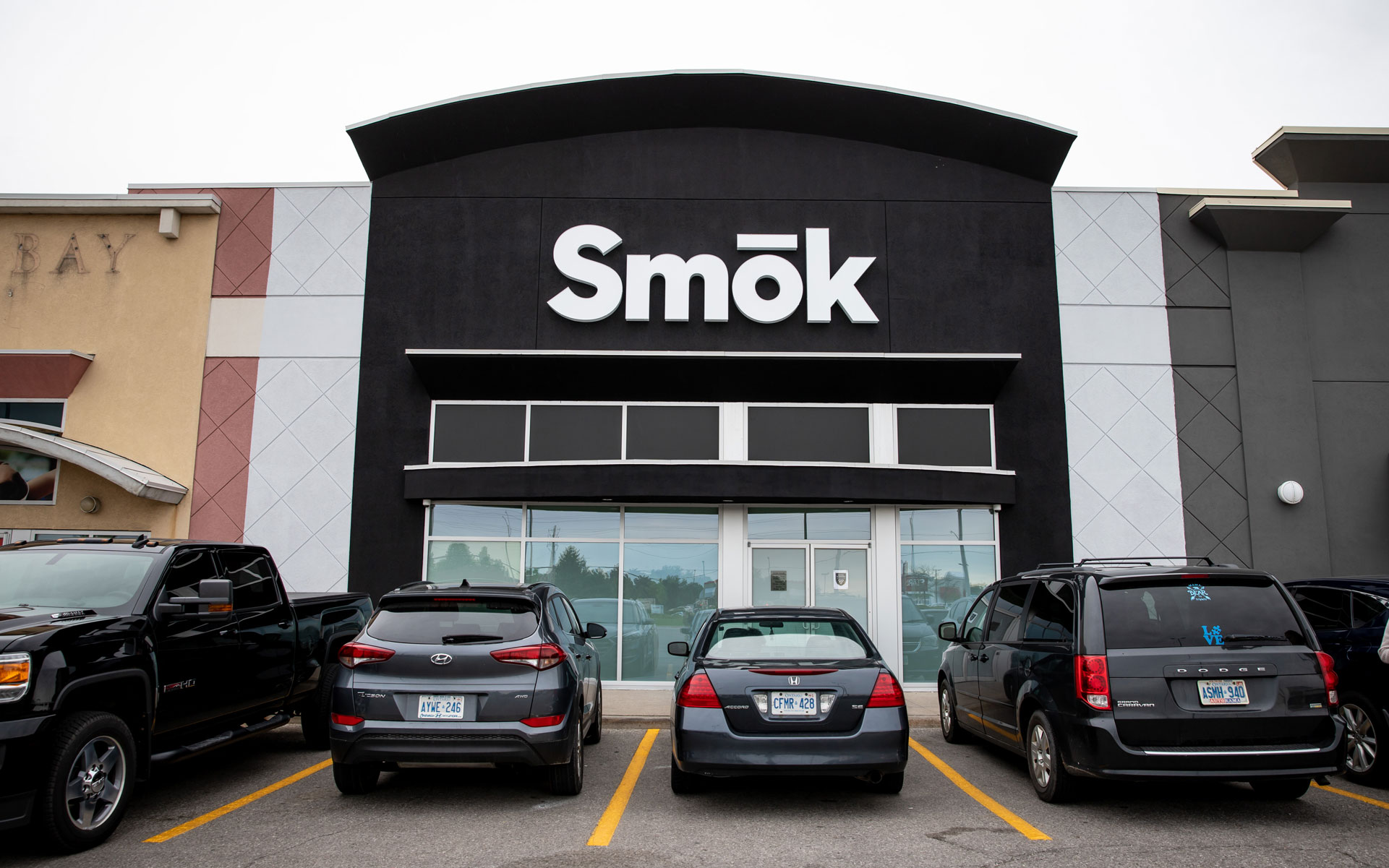 Located in a big box plaza neighboured by Old Navy, Best Buy, and other chain outlets, the store’s signage doesn’t make explicit mention of cannabis and blends in with the suburban surroundings.

Upon arrival, shoppers enter through a waiting area staffed by a worker who manually checks IDs before permitting entrance to the showroom. 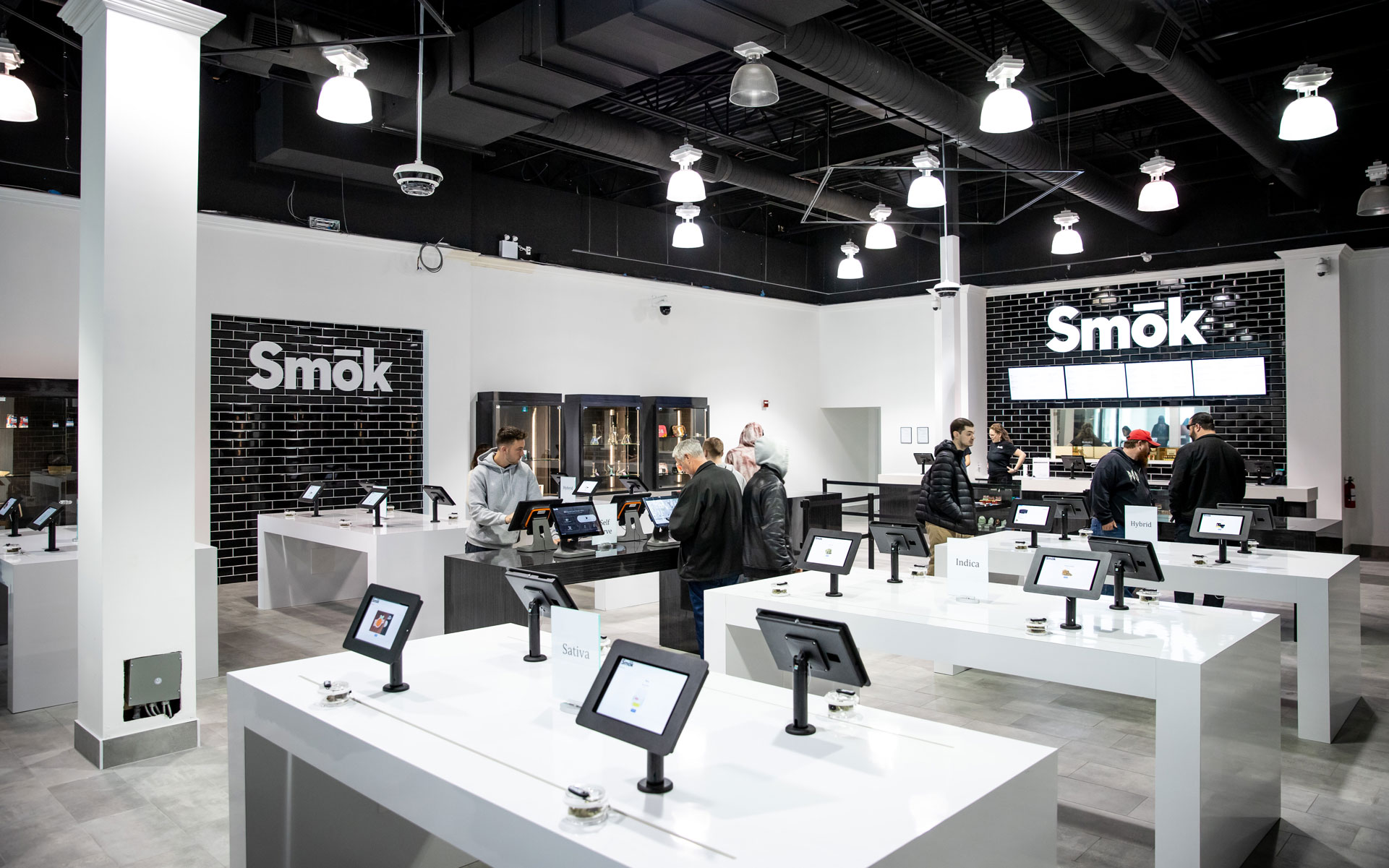 Inside, painted white walls contrast against glossy black subway tiles while high ceilings give the space a cavernous effect. 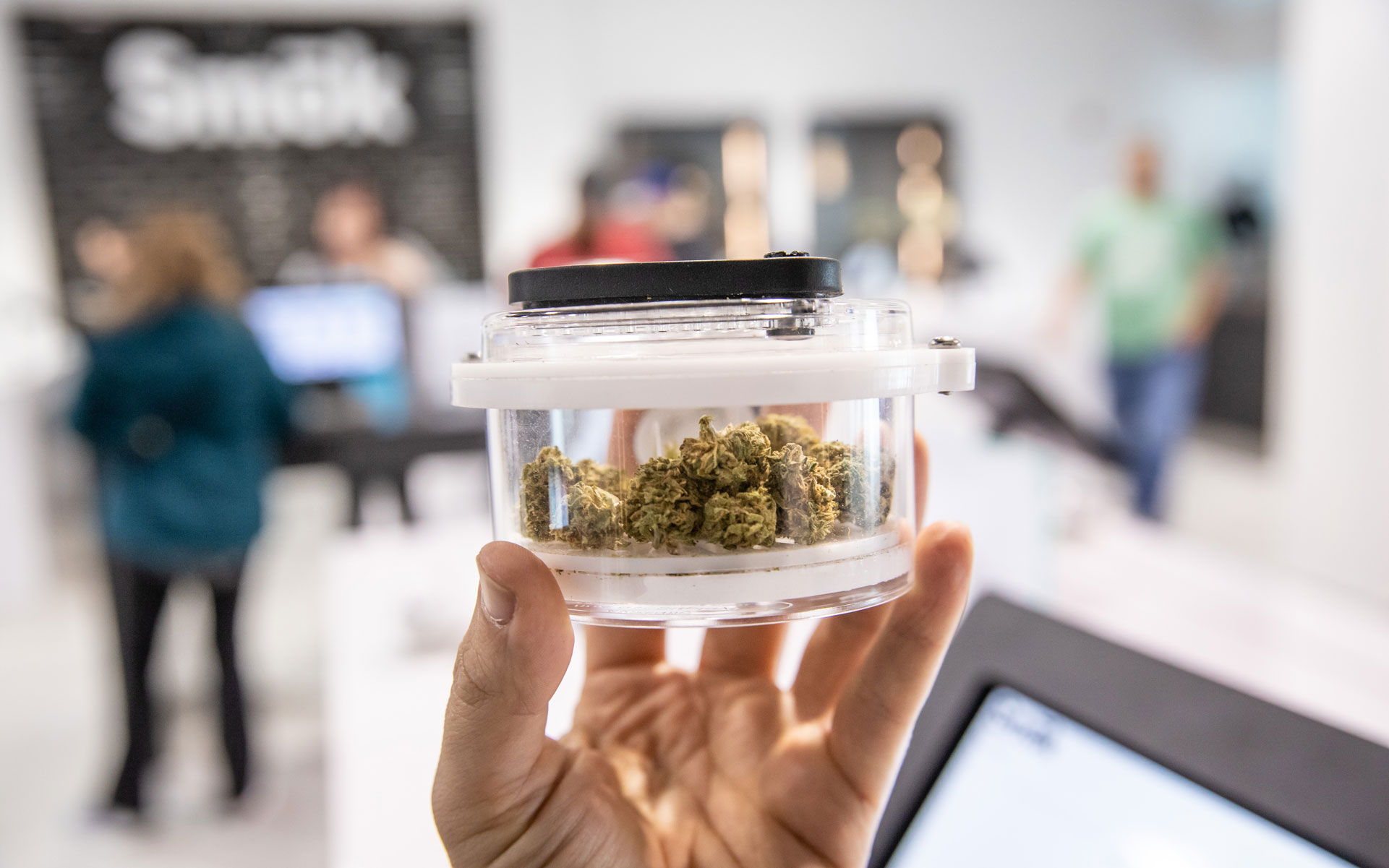 The place is packed with Apple Store-like tables, three of which show off strains samples in smell jars organized by cultivar: indica, sativa, and hybrids.

Orders can be placed in three different ways: patrons who want to shop solo can seek out self-serve stations positioned on tables in the middle of the store. 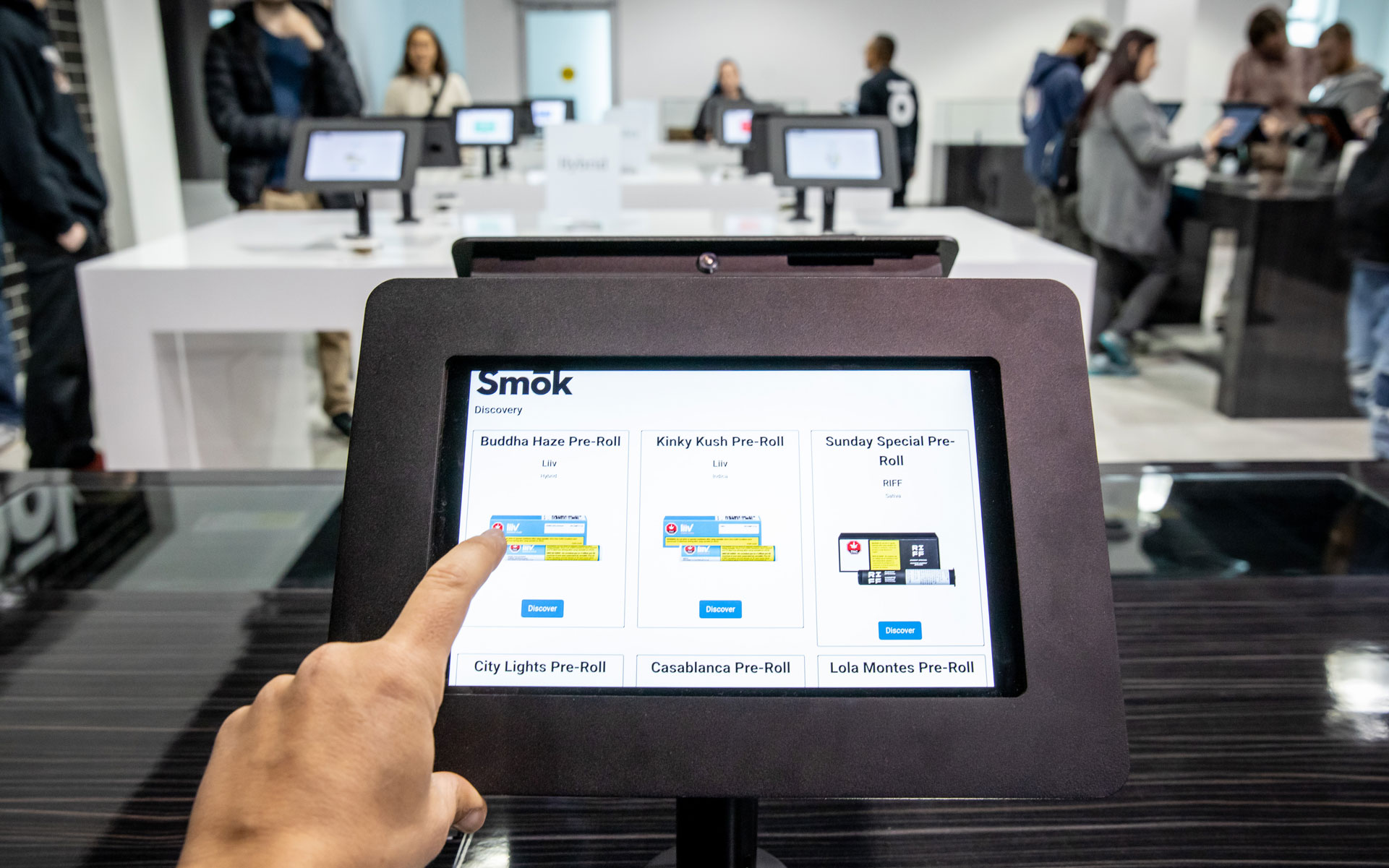 Meanwhile, tablet-wielding workers roam the floor and can assist in making selections and placing orders for products on customers’ behalf. Lastly, shoppers can visit the sales counter at the back of the store, which is where everyone pays anyway, regardless of where orders are placed.

Have You Visited Smōk? Leave a Review

The store sells a broad variety of dried flower from certain brands, including a sizeable amount of Canopy Growth products (including Tweed and Tokyo Smoke) as well as Aurora brands (including San Rafael and Altavie). The store also carries Edison, Solei, and Symbl products as well as few strains from the highly sought-after Broken Coast.

The store hopes to carry a good selection of craft strains in the future. 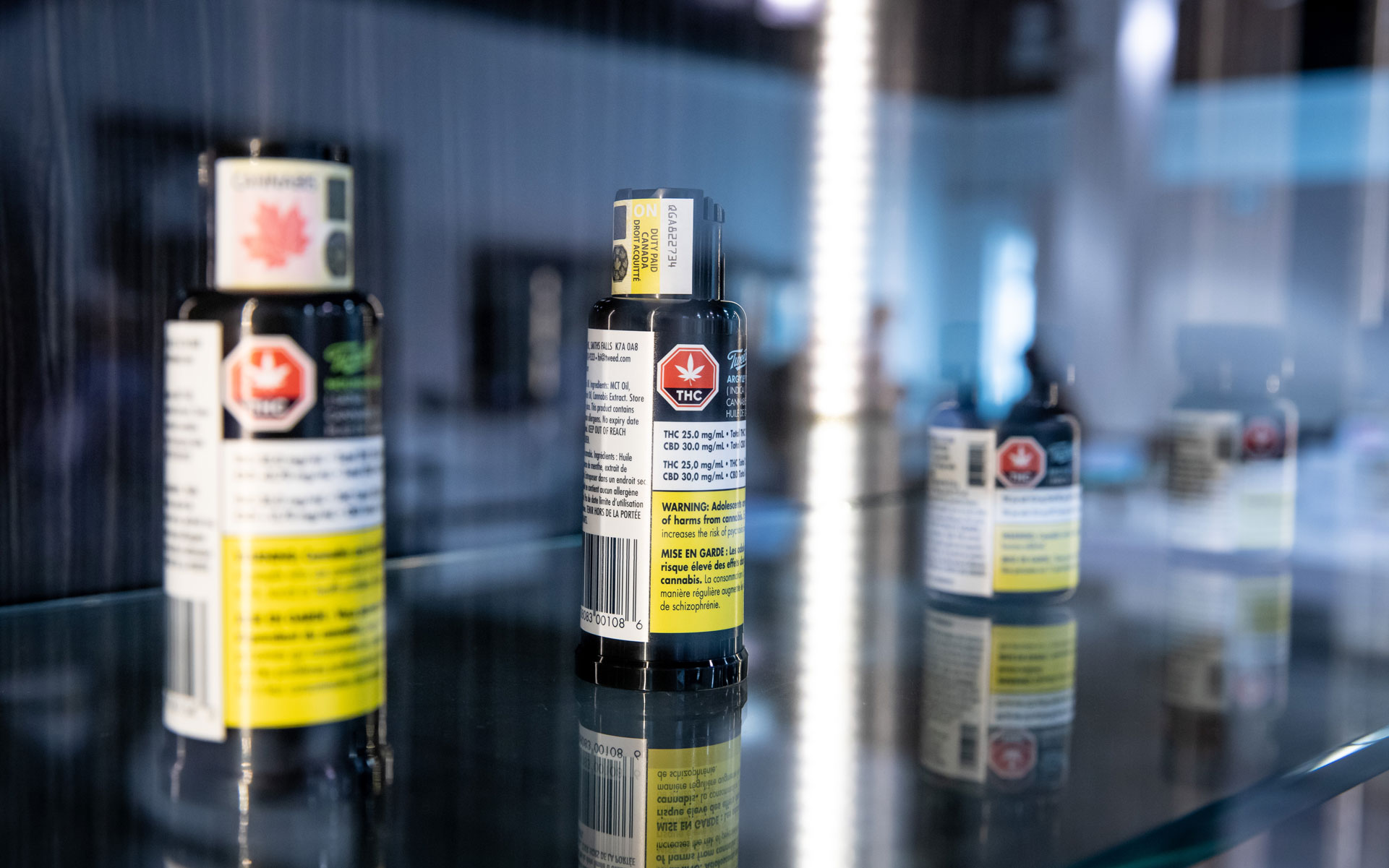 Smōk also carries a number of oils and capsules, including some high-THC sprays—although finding a consistent variety of low-THC, high-CBD products can prove more difficult due to nation-wide demand for such options.

After-tax prices work out to be slightly more expensive than the OCS but considering shipping costs and time, it’s a small price to pay. 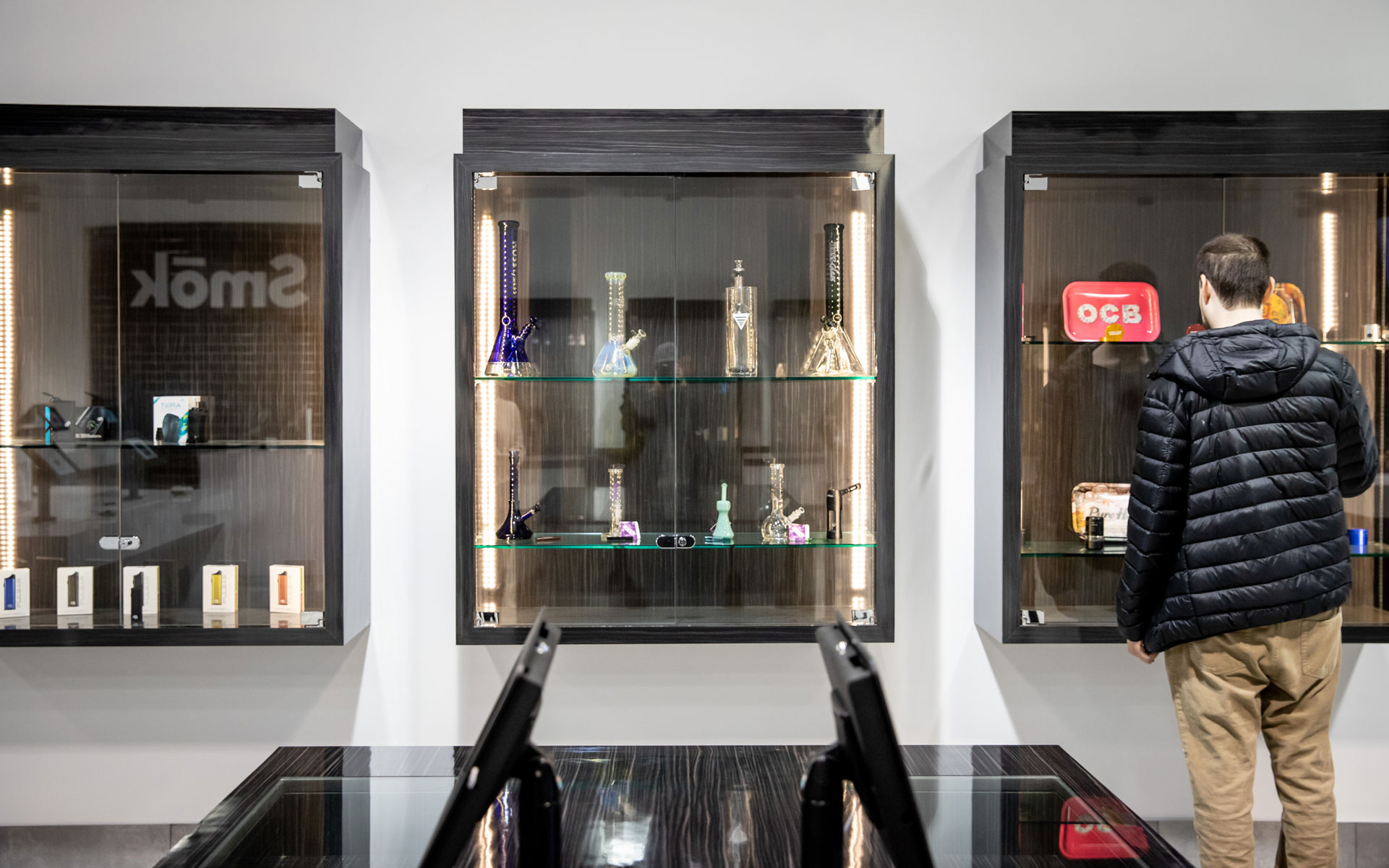 Aside from cannabis, expect to find a tightly curated selection of bongs, pipes, papers, and other accessories and ancillary items.

Live east of Toronto and looking for a discreet cannabis shopping experience? Smōk could be just what you’re looking for. It’s also wheelchair accessible with tons of parking in front.