But Netflix picked up the show for distribution and marketing June 22, which has led to an explosion of interest in Bealum, a stand-up comic, weed journalist, and cannabis event MC.

We caught up with Bealum during a layover on his way back from the International Cannabis Business Conference in Vancouver. He disclosed his past career as a weed chef, gave some tips for cooking, and made observations on California legalization and #permitpatty. (This Q/A was edited for clarity and length.)

Leafly: How has the reaction to the show been?

Ngaio Bealum: Oh my gosh, it’s been crazy. I think I had maybe just under 5,000 followers on Instagram and now I have more than 20,000 and that’s been in five days. And they’re from all over. Brazil apparently loves the show, Chile, Colombia. Everyone in the US seems to be a big fan. Somebody sent me a clip — they were watching it in Egypt. I knew Netflix was big, but I hadn’t reckoned on the international appeal of cooking with cannabis.

Find Cannabis Near You With Leafly Finder

How was working with Netflix?

I’m not the producer. I think they had just come up with an idea for a cannabis cooking show and they needed a cannabis expert and I don’t know who gave them my name. We shot the show and they sold it to Netflix. I thought it was going to be on a web channel, which was how it was originally pitched, and somebody managed to talk their way into Netflix and it’s been great for everyone. I hope they give me more work. I’m also a standup comic. I don’t know if they know that but I’m going to tell them.

It seems way more chill than intense cooking contest shows, and less precious than weed shows like Weediquette with all the slow-mo. How does it fit into the weed TV canon?

I think it’s a fun show because it’s pretty funny and the cooking is all top-notch. All the chefs are great. Brandon Coates, Andrea Drummer, Chef Mike — all the chefs on the show we had were fantastic and top-notch. Everybody is making really good food and they all have different styles.

I like the laidback-ness of the show, even though it’s still a competition. Some people say that the competition should be heightened, like Chopped with a countdown clock, and I don’t know. I think it’s really good the way it is. 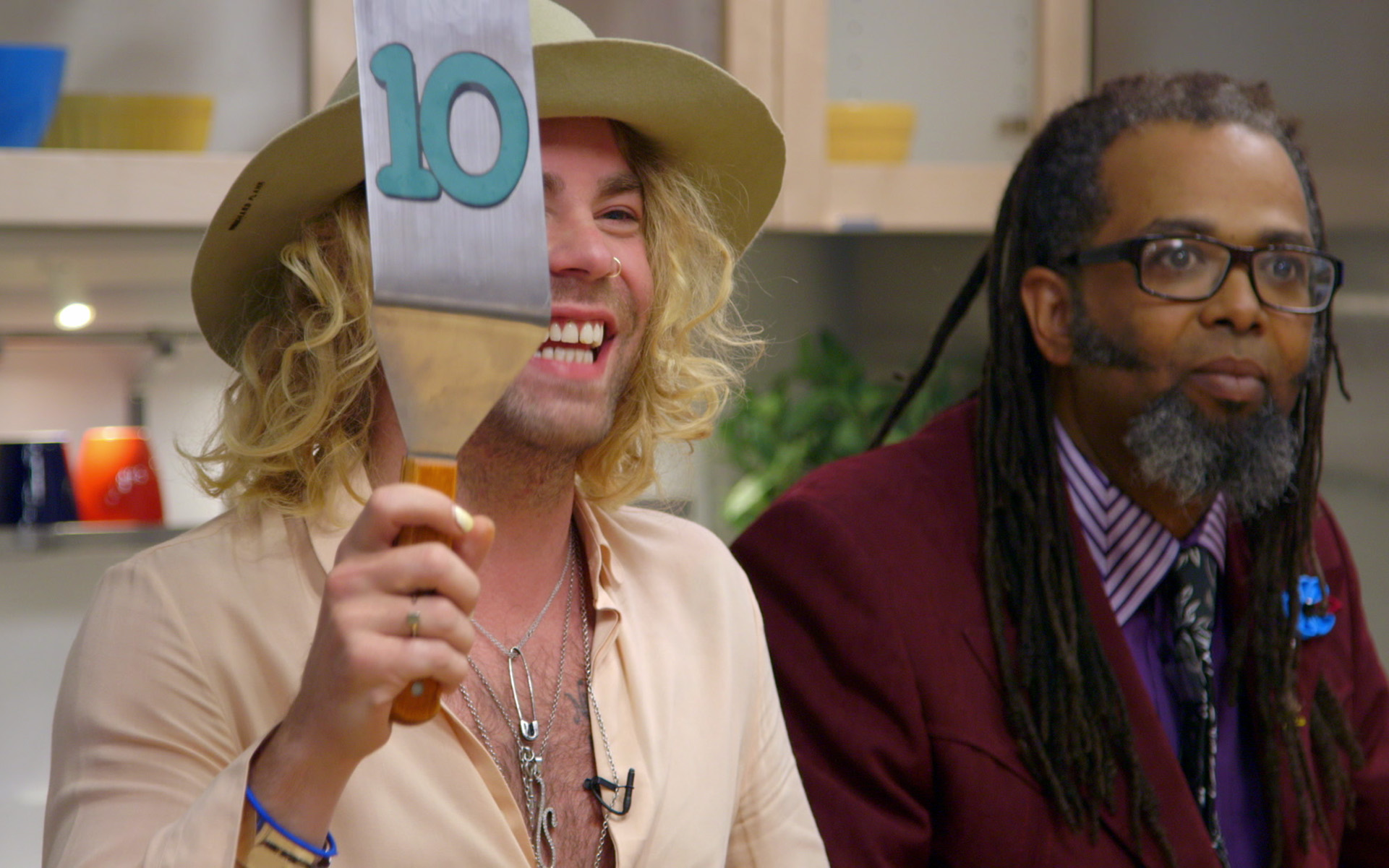 The vibe is aligned with the plant and the experiences — it’s no stress.

You still want to win. Everybody goes hard and cooks their best and I believe there were a couple of guys that were a little upset, but people are still laid-back. I love to introduce the weed. My love of marijuana comes across on the screen and that is one of my favorite things in the world — cannabis things.

Do you prefer to eat it or smoke it?

I prefer to smoke just because I like that way. I eat it on occasion, but you have to be careful because you can get caught by surprise, and a lot of times when I show up somewhere I’m expected to be talkative and entertaining. Edibles and dabs just make me quiet and somewhat telepathic.

What is your worst edibles experience you can remember?

I had a mild existential crisis on a Greyhound bus at 3 a.m. after overmedicating, thinking it would put me to sleep on the bus but it didn’t. I was there pondering my existence — right turns and wrong turns in my life — and I felt better at the end of it and was a better person for it. But the journey itself was maybe not the best way I would have done it.

You’re on a Greyhound bus alone, you can’t tell anybody, “Man I’m tripping balls on this bus.” They’ll kick you off. You still got to get to Seattle.

Had any good edibles recently?

I may have ingested a 10-milligram capsule on the way outside of Vancouver coming back to the States, and that made the airport very pleasant.

You are coming back from the International Cannabis Business Conference in Canada. How was that?

Frickin’ great. It was super-international — cats from Cayman Islands, Germany. Canada is legalizing in October, so the buildup is exciting. Although they are going to have a lot of the same problems that California and Oregon have, so everybody is over-regulating like it’s yellowcake uranium, but it’s marijuana. I mean, people have systems in place. You might as well just allow those systems to go as opposed to trying to impose your ridiculous will on it. Anyway…

You’re from Sacramento, California. How are you feeling six months into licensed adult-use sales?

I feel like California could do a better job of enticing smaller craft growers into the market. We were sold Prop 64 as a way to give smaller growers a head start and that is not how it worked out in application. And while the theory was sound, as usual, money, interests, and the government started to work together to push smaller people out.

It shouldn't cost a half a million dollars to get a license and a farm.
Ngaio Bealum, Comedian, Journalist

It shouldn’t cost half a million dollars to get a license and a farm once you go through all the planning, lawyers, and insurance you have to buy. It’s not going to do anything to combat the grey or black market. Weed is still illegal in Idaho and Nebraska, and if you live in a county where you can’t get a license for your farm, you might as well stay underground and illegal.

It’s an interesting thing, right, because you go to the clubs and prices are a little higher and there’s taxes and everybody’s employees are paid well, but then you go to some of these grey market farmers’ markets and you can get a $50 ounce and a $25 ounce. You can get a joint for a dollar, and it’s hard for clubs to compete with that.

I wrote a whole column about [Alison Ettel]. She had me hot. Dude, you’re selling cannabis for dogs. There’s no reason for you to call the cops on someone else hustling. It’s a victimless crime. Game should recognize game. You know what I mean? It’s insane. It’s just rude. It’s a bad look for the industry. If you’re an industry started by outlaws, you shouldn’t challenge eight-year-old kids. And she’s saying she’s getting death threats. Calling the cops on a black child could be construed as a death threat in today’s day and age. And that may be a harsh way to look at it, but it’s for real.

Let’s end on a chill note. Shout out some awesome Sacramento food.

The Grange is my favorite fancy restaurant — in the Hotel Citizen. Sacramento just got good food everywhere, though. There’s so many different places you can eat and have an enjoyable time. We’re very foodcentric. I think we have better restaurants than Portland. Oh yeah, I’m talking shit.

What basic weed food should everyone cook?

Back in the day the in early days of my cannabis career, I had a small line of cornbread and citrus-infused olive oil cake that I made with orange zest and cannabis-infused olive oil, and those are quite delicious. That’s the beauty of it — it’s so easy to infuse butter and oil to make almost anything you want. So any of your cakes, any of your pancakes.

I was just in Vancouver and they were selling cannabis-infused maple syrup, and that got me pretty excited, right?! Wake, bake, and pancake.

Give me your best weed cooking tip or hack.

Just use your crock pot. You don’t even have to buy some fancy gear. Get a crock pot and stink up your house for a few hours with slow-cooking weed, and you’re good to go.

Cooking On High is streaming today on Netflix through your nearest internet connection.

If you want a 2nd season on #cookingonhigh please watch the episodes all the way through. It helps the algorithms or something. That’s what I heard. And each episode is like 15 minutes. Easy.