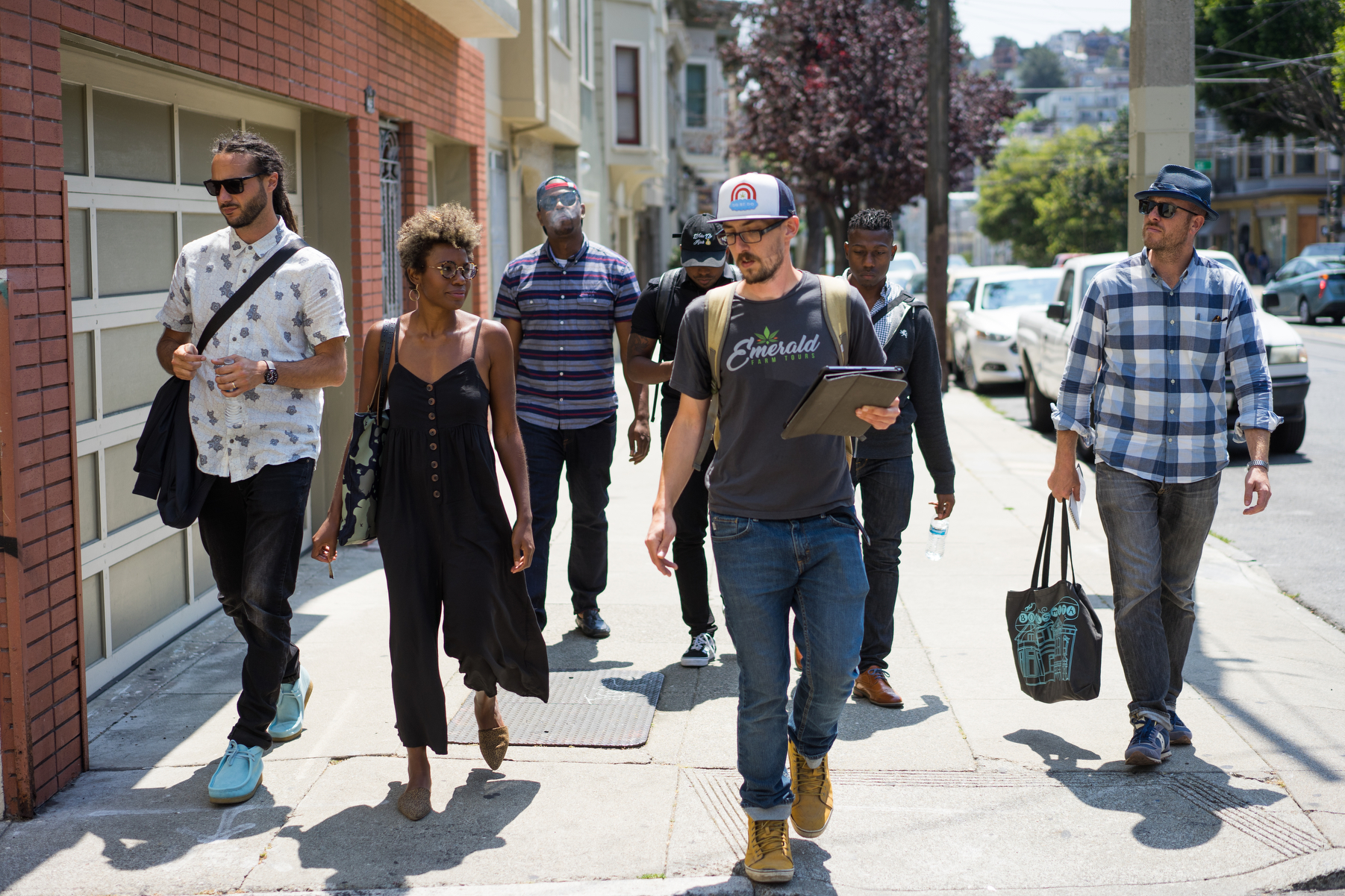 Fatty Jay, third from right, leads a group of tourists through the Castro in San Francisco, Calif. on Saturday, Aug. 11, 2018. Emerald Farm Tours delves into the history of marijuana in the city. Photo by James Tensuan
On a sunny Saturday morning, Victor Pinho’s cackling laugh rings out above the hustle and bustle outside San Francisco’s historic Ferry Building.  He’s laughing at his own joke while corralling a straight-laced couple from Pennsylvania who’ve signed up for his “Cannabis Culture” tour of the city.

On the itinerary: Hippie Hill, the Dead's Summer of Love house, two dispensaries and a cannabis lounge.

Scott and Susan (pseudonyms, at their request) are a middle-aged couple dressed in affluent-casual style: a knit sweater and capri pants, designer jeans and a collared shirt. This is their first full day of a Northern California getaway that will include a couple of nights “roughing it” at Lake Tahoe followed by a high-end swing through wine country.

“We feel like what’s happening in California with cannabis is quickly changing the conversation everywhere else,” Scott explains, when Victor asks what motivated him and his wife to climb aboard a Mercedes Sprinter van for a four-hour-and-twenty-minute excursion through the local weed scene. “We’re pretty much just occasional pot smokers, but it’s something we both enjoy and see the value in. We figured this would be a fun way to see the city and learn something new.” 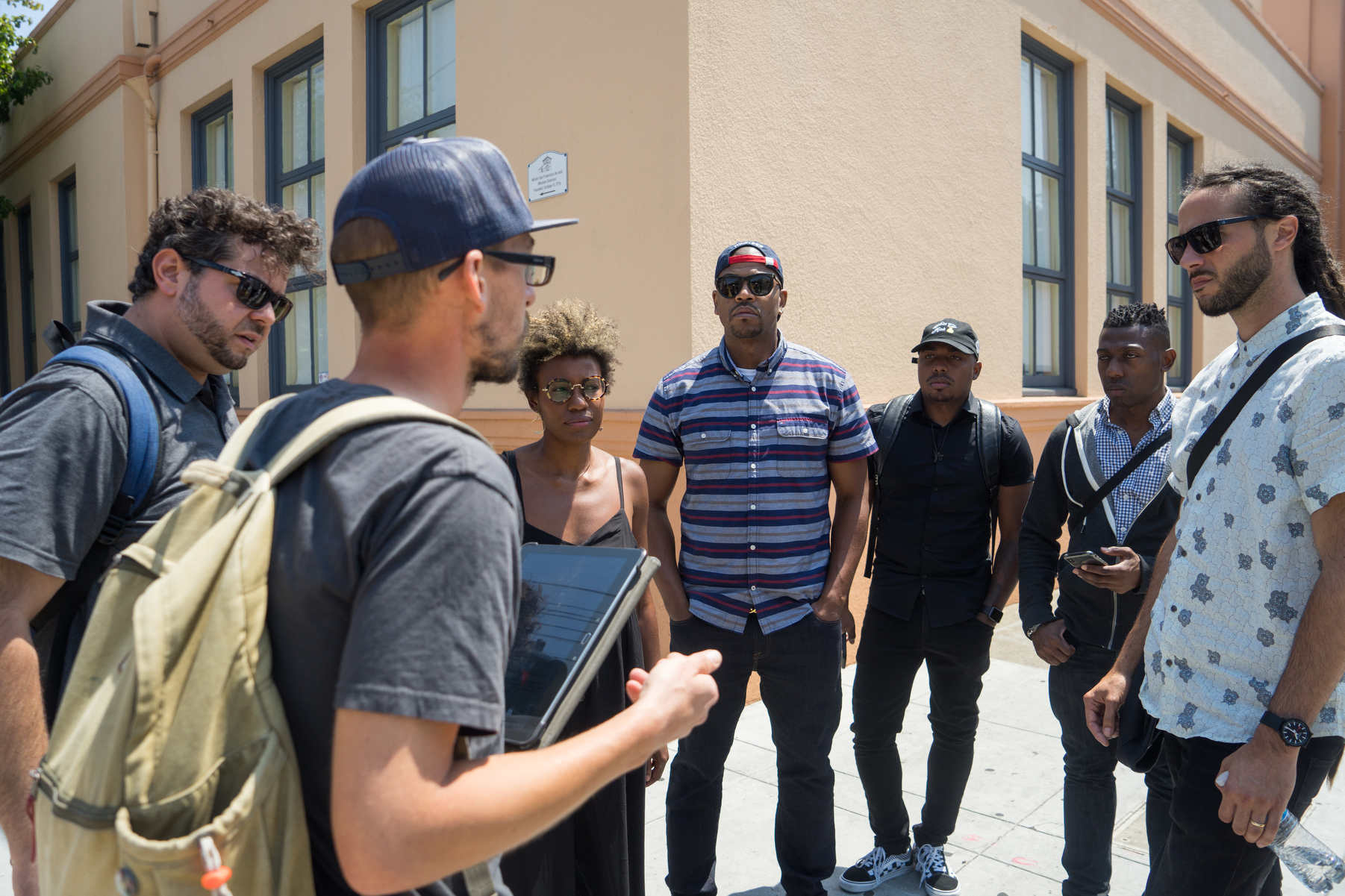 Victor and Fatty Jay—Operations Director for Emerald Farm Tours—make sure everybody’s seated, hydrated, and well supplied with snacks before we depart.

Our itinerary today includes stops at “Hippie Hill” in Golden Gate Park; the Haight-Ashbury house occupied by the Grateful Dead during the Summer of Love; and the Castro Castle, where local cannabis legend Dennis Peron lived until his death this past January. Our first and last stops will be SPARC and Barbary Coast, two of the city’s leading dispensaries and consumption lounges. 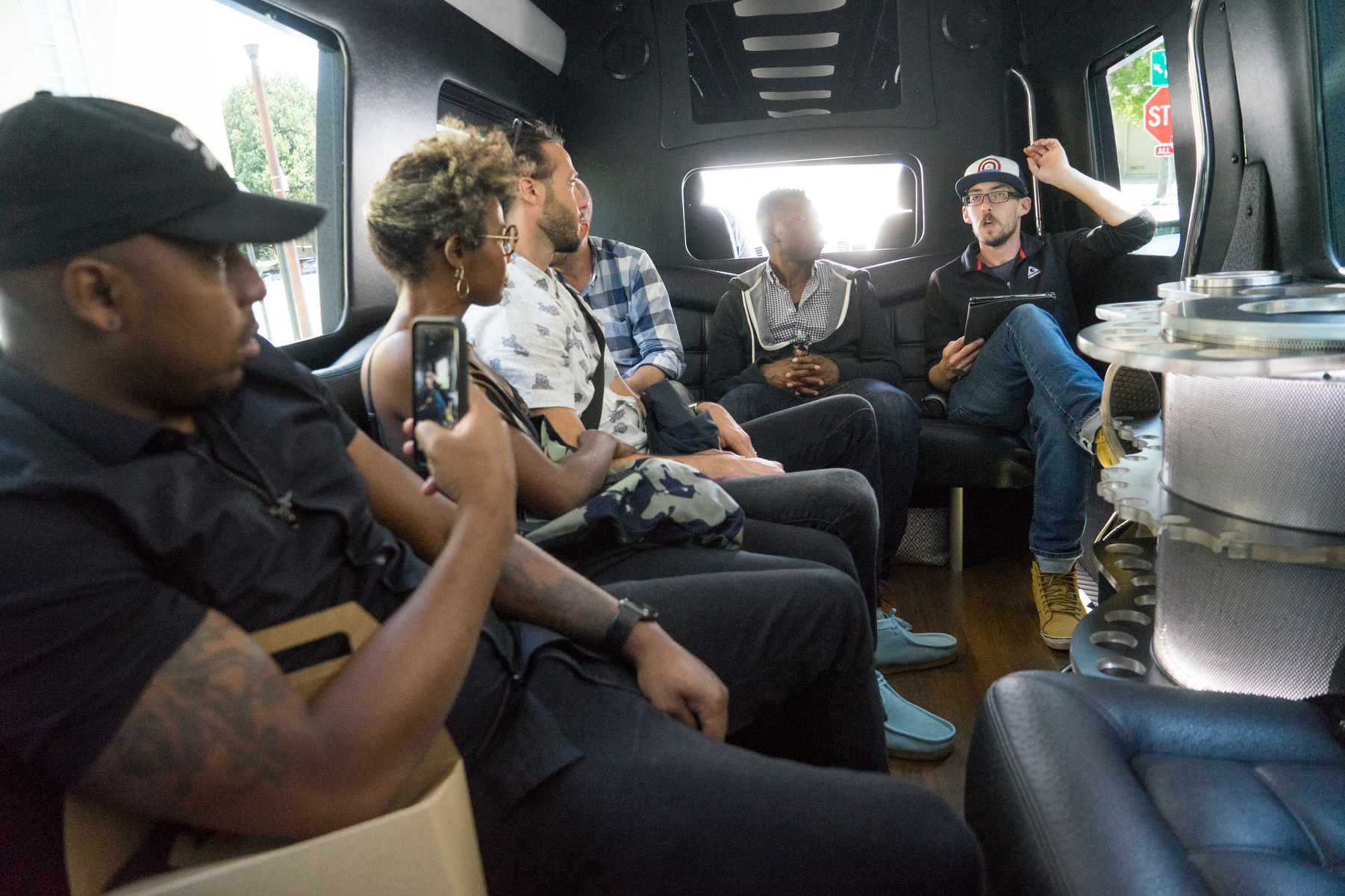 Fatty Jay, right, talks about the history of marijuana during the Emerald Farm Tour of San Francisco. (James Tensuan for Leafly)

Emerald Farm Tours began as a natural extension of Victor and Jay’s legalization activism. They met more than a decade ago as undergrad activists with Students for Sensible Drug Policy, the student-run network dedicated to ending the war on drugs.

After college they kept up their friendship and their activism while pursuing careers in the emerging cannabis industry. Victor put his marketing skills to work for dispensaries and cannabis brands, while Jay focused on small-scale craft cultivation. In addition to tours of San Francisco, they also offer a Seed to Sale Tour that visits a legal grow and a concentrates manufacturing facility. Later this fall, they have plans to offer multi-day trips up to the Emerald Triangle to observe the harvest.

“An important part of our job as tour guides is to educate people from all over the country, and around the world, about what we’ve done correctly here in California, and also what we’ve done wrong,” Victor explains. “That includes digging into the history of cannabis prohibition, to explain why it was so damaging, and to honor those who risked arrest and incarceration to overcome it. Because we really want people to absorb that knowledge, and bring it back home with them, along with a really positive, unique experience. That’s how social change happens.”

Waiting for the Tourist Boom

A 2017 report from The Wine Institute estimated that California’s wine regions annually draw 23.6 million visitors, who leave behind an economic impact of $7.2 billion. Now stop and consider that you can buy and consume California wine almost anywhere on Earth, while California cannabis can’t legally leave the state.

Colorado has made life difficult for cannabis-friendly tourists. California could set a new tone.

So just imagine the pent-up demand from herbal enthusiasts around the world who can now hop on a plane, leave prohibition behind, and spend some quality time puffing on classic Cali strains like OG Kush and Trainwreck while paying a visit to the artisanal pot farms of Humboldt County, or exploring Los Angeles’s hot THC-infused dining scene.

Colorado, which got a head start on California when it came to adult-use legalization, saw a significant tourism boom after the start of recreational sales in 2014.

And that boom could have been a lot bigger. The Rocky Mountain State’s governor is a former brew pub owner, and Denver hosts the Great American Beer Festival every year (drawing over 60,000 suds lovers), but Colorado has gone out of its way to make life difficult for cannabis-friendly visitors. It’s been nearly five years since adult-use sales began, and still in the entire state there’s only one cannabis consumption lounge, and zero events where cannabis can be sold and consumed. 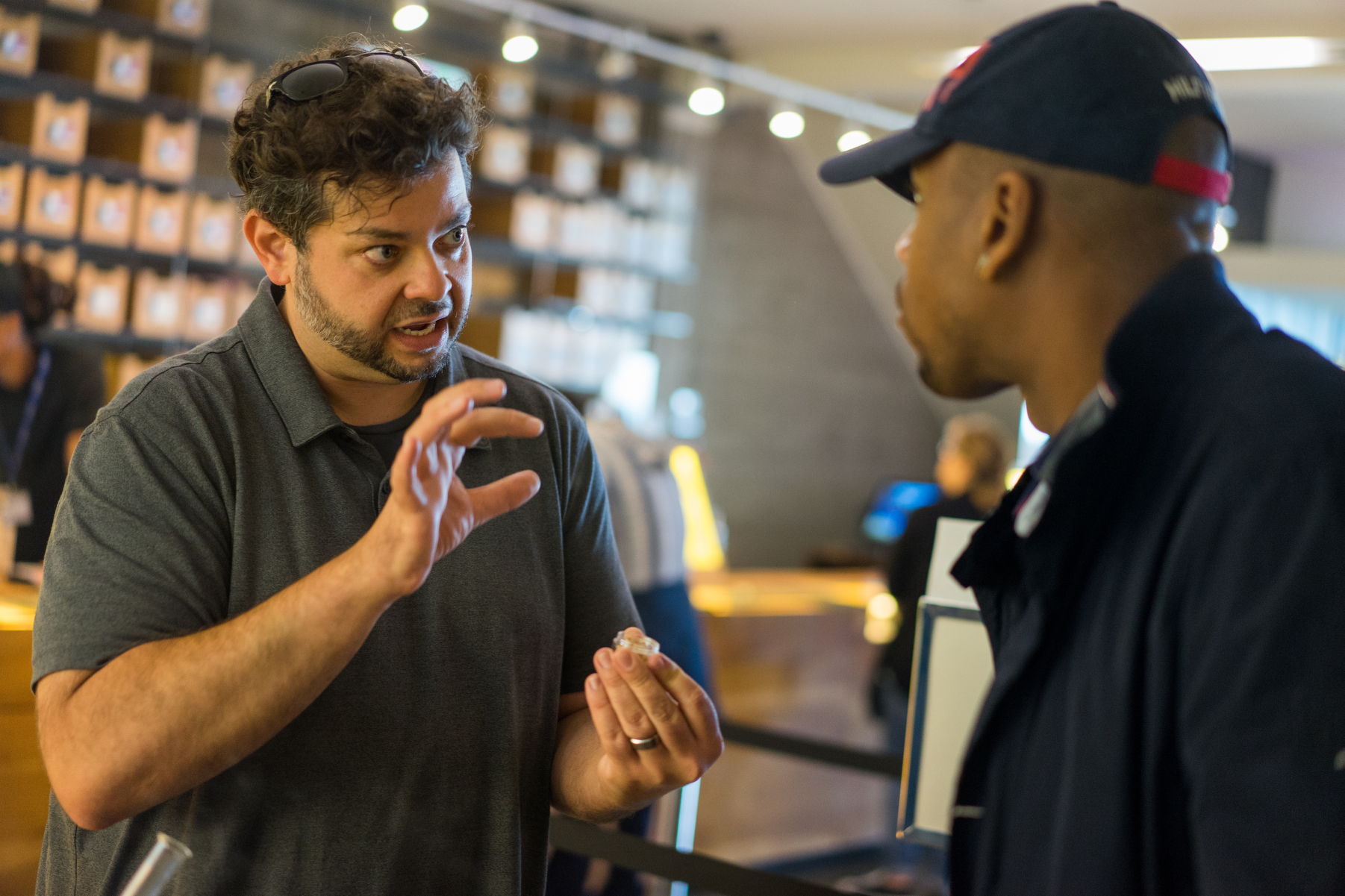 Earlier this summer, police in Denver boarded two separate cannabis tour buses on the same day, arresting one driver and ticketing 30 passengers after an undercover investigation determined tour operators were breaking the law by allowing cannabis consumption in the back of their vehicles.

Representatives from both companies targeted by police—My 420 Tours and Colorado Cannabis Tours— denied any wrongdoing and vowed to appeal. They will presumably begin their defense by quoting from the official Colorado.gov guide to cannabis use in the city of Denver, which clearly states that while “it is illegal for drivers and front-seat passengers to use marijuana in vehicles designed for private, for-hire transportation in Denver… if the private, for-hire transportation operator allows for it, marijuana may be consumed in the rear passenger area.”

Currently, both affected tour companies are continuing to operate openly as the case against them moves forward. In the meantime, Colorado is far from alone in raking in cannabis tax money with one hand while pushing tourists into the margins with the other. A recent article in Tourism Weekly, a trade publication for the travel industry, detailed the many challenges those marketing cannabis tourism face, including resistance from local governments, advertising restrictions, few if any places to consume legally, and scant cannabis-friendly accommodations.

At Barbary Coast, our final stop, we present our ID’s to security at the door, then wait in line behind twenty or so other customers for our turn at the retail counter. Scrolling rapidly through an iPad menu placed strategically for our perusal, Victor explains all the different delivery systems and products.

“The fact that you can optimize the way you get high depending on the kind of experience you want is really interesting,” Scott says. 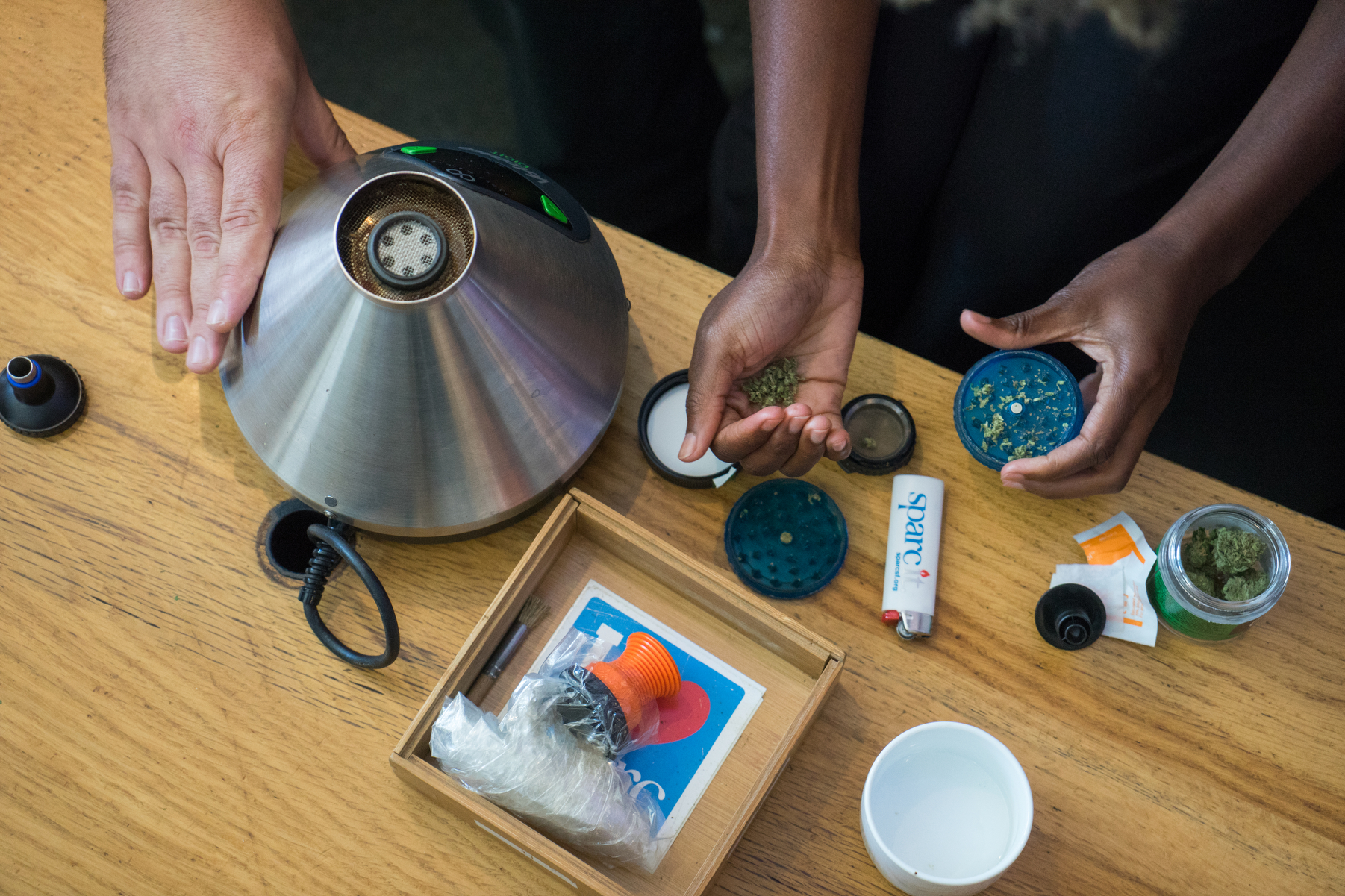 An Emerald Farm Tour member prepares to use a volcano at Barbary Coast’s legal consumption lounge in San Francisco. (James Tensuan for Leafly)

After much deliberation, they purchase a Monarch vape pen from Legion of Bloom, plus a replacement cartridge of Grape Ape from P2. They’ve never tried a vape pen before, and look forward to taking small, discreet puffs to enhance meals and help them relax on the rest of their vacation.

In the adjacent consumption lounge, we made our way to a table reserved in advance. By now, Scott and Susan have loosened up considerably. Or maybe they’re just not quite so straight-laced as they first appeared. Because when the second joint goes around in the lounge, Susan gives her husband a little “why not” shrug and takes a couple of Marley-sized puffs.

And truly, why not?

This is certainly the place for it.  The décor is sumptuous and inviting, with dark wood paneling, stained glass chandeliers, plush leather booths and red velvet wallpaper. Plus there’s a state-of-the-art air filtration system, which complies with state cigar bar regulations and allows Barbary Coast to permit smoking, not just vaping and dabbing like most of the city’s other legal consumption lounges. 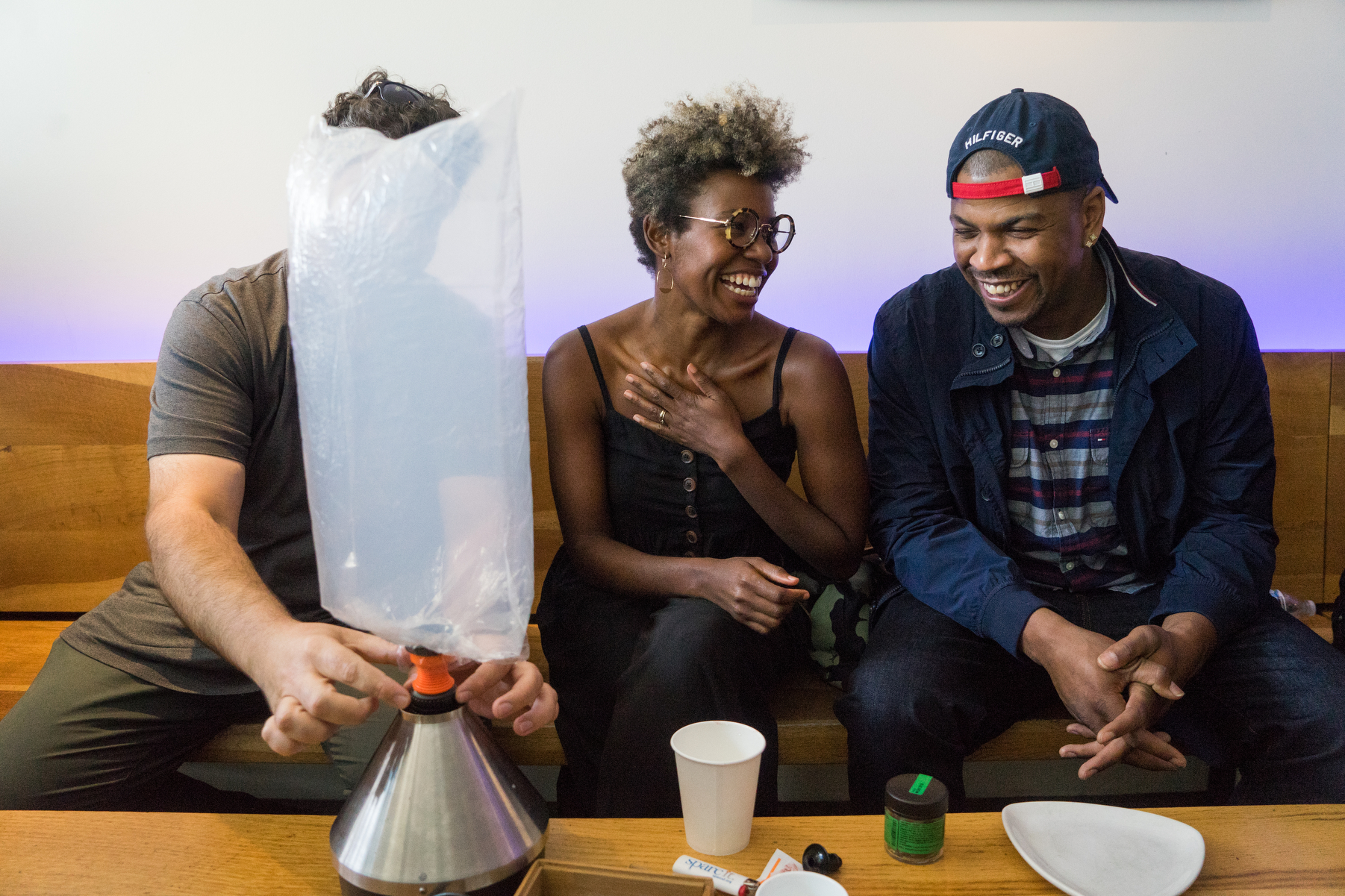 Meanwhile, the tour group’s collective shopping spree has morphed into a game of “try this, now try this,” with all of us eager to spark up and share. The conversation moves from chit chat to an impassioned discussion of how California’s new cannabis regulations have created serious challenges for the state’s traditional mom-and-pop growers and retailers. At which point I get my second pleasant surprise.

Victor and Fatty Jay give visitors the tools they need to enact change back home.

This time it’s when Scott and Susan—who seem like a couple with a pretty healthy stock portfolio—express their opinion that “the little guys” should be allowed to flourish without getting overrun by Wall Street types pushing their way into the industry.

Of course, they’ve heard a lot today to support that opinion. In course of explaining various points of interest, Victor and Jay touched on how San Francisco’s medical marijuana pioneers faced arrest and incarceration for providing cannabis to the desperately ill. They recounted the racist history and legacy of prohibition, and laid out their version of the near present—how “Big Marijuana” lobbyists and government regulators have created a legal marketplace with entry barriers that are often too high for the industry’s true believers and pioneers to stay viable.

Credit much of that messaging to Fatty Jay, who takes very seriously Emerald Farm Tour’s responsibility to educate their customers as well as entertain them and provide for their safe passage.

“I feel a strong obligation to not only celebrate the wonders of legalization, but to also pay homage to the outlaws and the mom-and-pop operations that are the true roots of legal herb today,” says Jay. “Most importantly, I want to ensure anyone who joins us for a tour will return to their home state or country well-equipped to advocate for sensible cannabis policies in their own backyard.”