How Canadian retailers guide customers to the right kind of cannabis

Cannabis is a complicated plant, and classifying its cultivars is a tricky business, one that often inspires more questions than answers.

Should retailers cleave to the familiar sativa/indica/hybrid breakdown of the legacy market, or should they base descriptions on lab data that is hard to gather and even harder to standardize, and that may or may not be understood by a consumer base that is still learning its CBD from its THC, let alone its myrcene from its linalool, or its quercetin from its kaempferol?

What’s more important to the average cannabis shopper? A plant’s appearance, or its potential effects?

For instance, if a customer comes in saying they want an indica, are they asking for buds hailing from a short, bushy plant, or expressing their desire for a particular outcome—clocking a decent sleep, perhaps, or maybe just getting buzzed AF?

How Do Retailers Classify Strains?

Every store has its own method, but in general, most retailers organize their buds by plant type (such as sativa, indica, or hybrid) or by intended effects.

The fine print differs, but stores using an intended effects model tend to employ similar, or at least overlapping categories, allowing shoppers to choose strains purported to be energizing, relaxing, or somewhere in between.

Many stores also toss in a few categories that suggest particular activities, like socializing, creating, or lovemaking. 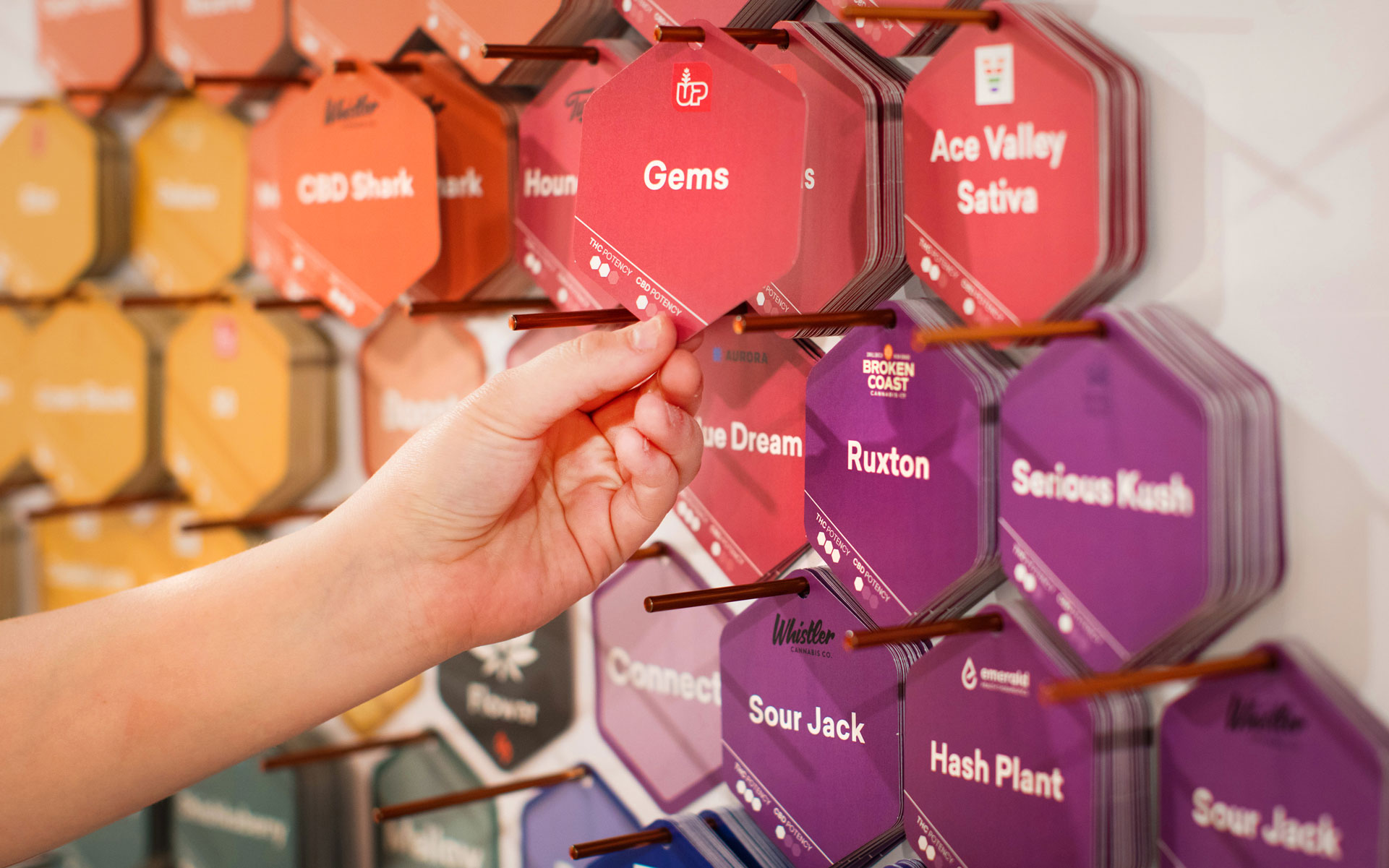 Regardless of where they start in their classification model, retailers usually end up employing a somewhat hybridized approach. Nova Cannabis, for instance, starts with plant type, then includes secondary information on desired effects, while Hobo starts with desired effects, then includes a sativa/indica/hybrid breakdown as secondary information.

Why Do Stores Classify Their Products This Way?

Harrison Stoker is VP of brand and culture at Donnelly Group, the parent company of Hobo Recreational Cannabis Stores. He says that choosing how to categorize products was one of the retailer’s biggest early decisions, and something his team put a lot of thought into. 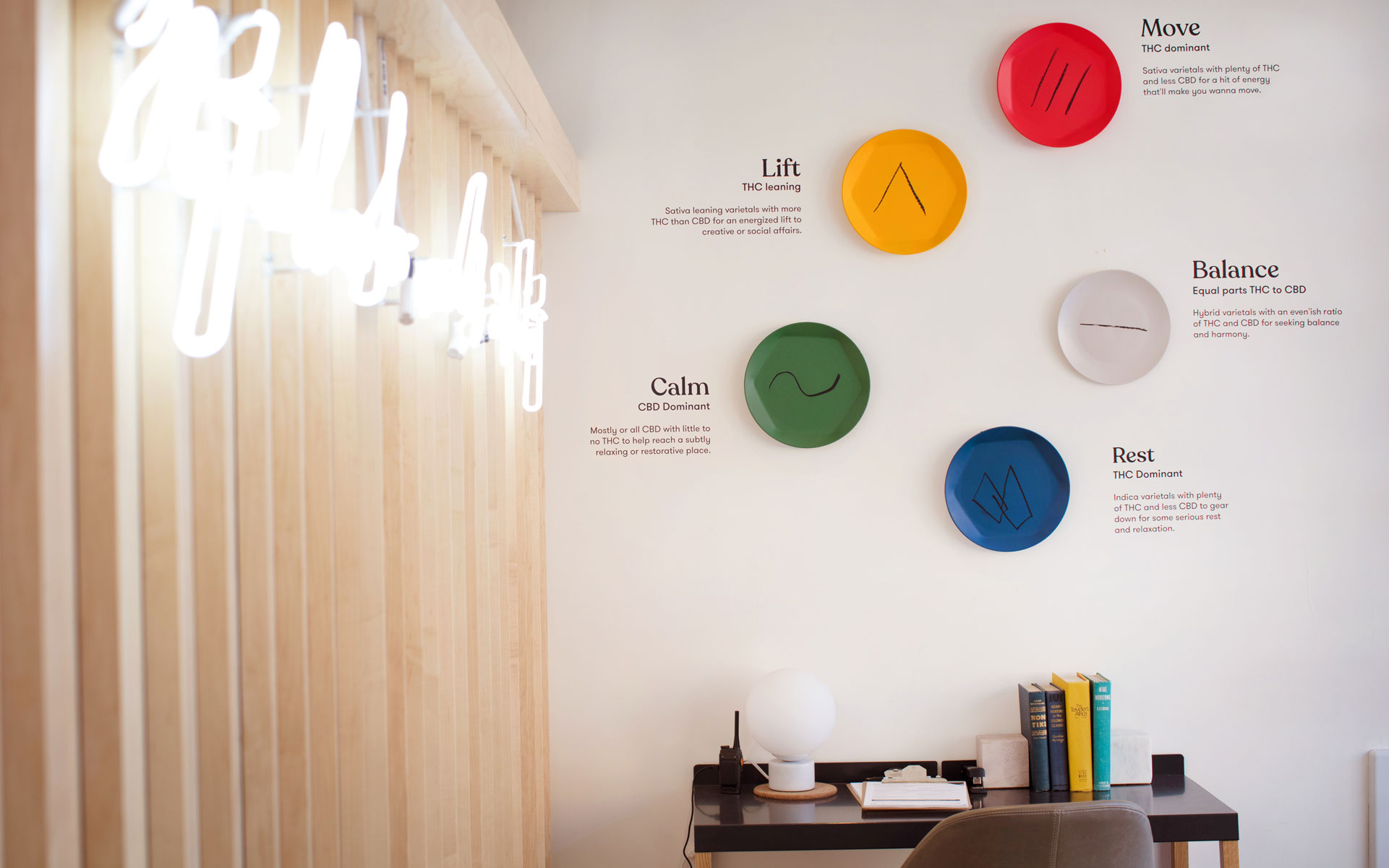 “Everyone agreed that the sativa/indica/hybrid model was dead or about to die,” he says. However, they also recognized that the terms are still in common use, which is why they’re included in product copy. Stoker says that Hobo’s current effects-based categories represent a transitional period in the market. In the future, he believes terpene content will play a stronger role in how stores describe—and customers choose—their products.

At Fire & Flower, retail training specialist Megan Larson preaches a similar approach, noting that plant descriptions such as sativa and indica aren’t that helpful at predicting experience. She won’t say exactly how the company decides which strains land in which of their six categories, calling it the company’s “secret sauce,” but she will tell us the process factors for terpene profile and cultivar lineage, as well as personal experience from cannabis experts. 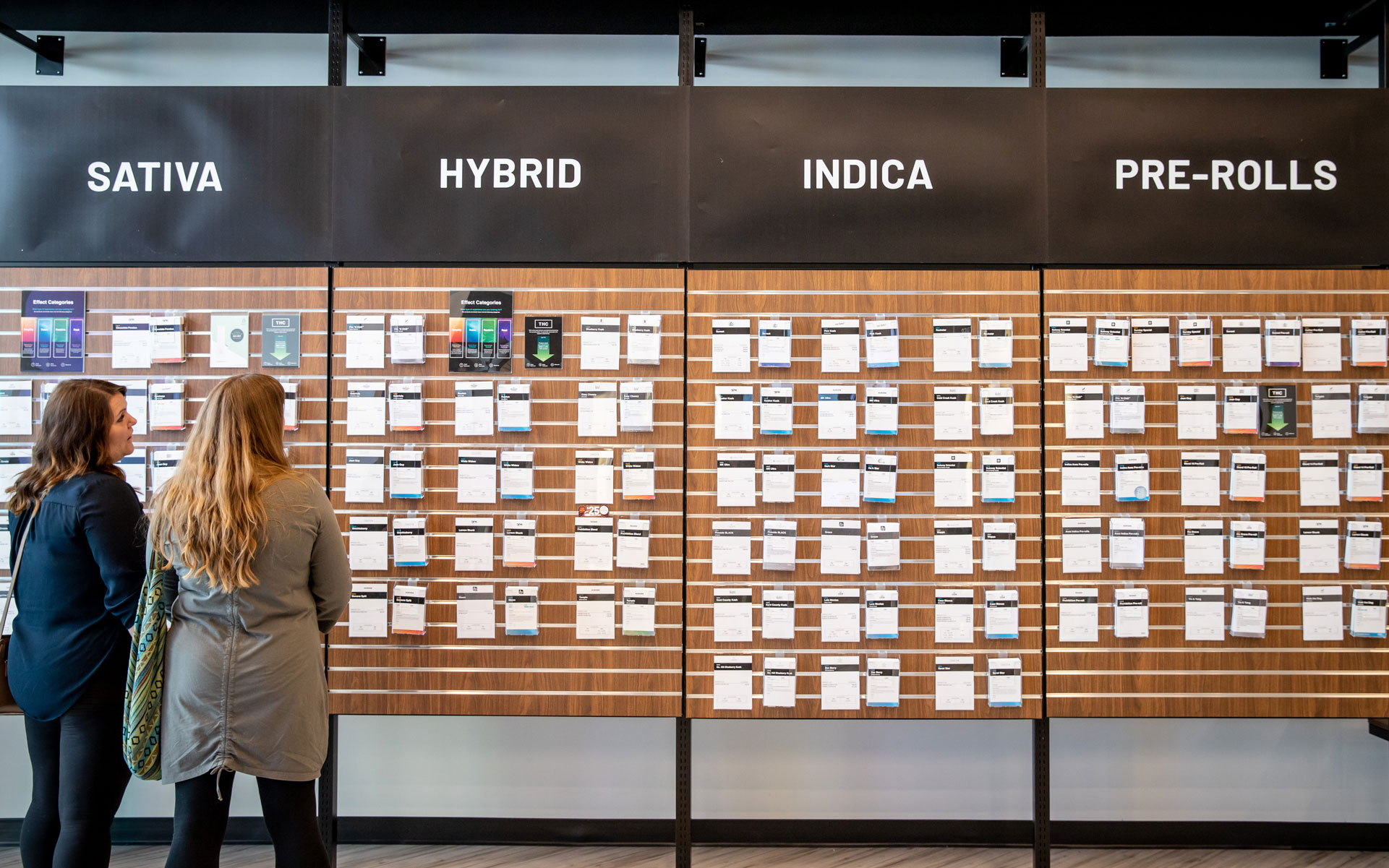 Customers browse Nova Cannabis where the selection is displayed via postcards mounted to the wall. Strains here are sorted under the headings; sativa, hybrid, and indica. Photo by Jesse Milns/Leafly

At Nova, products are classified by plant type and defined by plant morphology, with the understanding that sativas are tall and thin with long and narrow fan leaves, indicas are short and bushy with deeply-hued, broad leaves, and hybrids fall somewhere in between.

Nova uses this system because the traditional triad provides a “common and easy way for customers to refer to the product,” says Senior Manager of In-store Experience Kristine Arcand. Still, she thinks that novice users are better served by looking to the store’s secondary information on expected effects, “whereas a more experienced user will be able to comprehend more of the plant morphology as they would have traditionally had experience with a variety of different strains.”

Related
Cannabis anatomy: The parts of the plant

How Should Stores Classify Their Cannabis Products?

Noah Kauffman is head of sales at Strainprint Technologies, a medical data company whose app enables consumers to easily track their cannabis sessions. He says that at this point in time, it’s difficult to say how retailers could do a better job classifying their products while staying inside the bounds of the Cannabis Act.

All stores currently offer THC and CBD breakdowns for their products, and some may feature additional cannabinoids and terpenes in their classifications (depending, of course, on what information is provided by the licensed producers growing their stock and how that information is shared by provincial distributors, a process that is not even close to being standardized).

The challenge is that nobody is working with the full picture. We don’t have a full breakdown of all the cannabinoids and terpenes. Don’t get me started about the flavonoids—they’re never listed.

“The challenge is that nobody is working with the full picture,” says Kauffman. “We don’t have a full breakdown of all the cannabinoids and terpenes. Don’t get me started about the flavonoids—they’re never listed.”

Although researchers are still working to determine how the various ingredients in cannabis—the cannabinoids, terpenes, and flavonoids—influence various bodies and each other, there is an emerging consensus that their sum is greater than their parts.

“By looking at many different products with the same CBD:THC ratios we see that there is still a wide range of difference in both medical and recreational outcomes,” says Kauffman. “So what can we say with confidence? Different components work together to produce unique or varied outcomes (the entourage effect we hear so much of). It’s more than just CBD:THC ratio.”

Related
What are cannabis terpenes and what do they do?

“We see patterns in the data which suggest different people will have similar experiences given the same product—although it’s not 100%—and there are patterns in the terpenes and cannabinoids that are driving those effects, but there’s lots more work to do.”

What Does The Future Hold?

Legalization is all about baby steps, and it will be some time before Canadian retailers can access comprehensive and standardized information about the flower they sell, and its chemical variations from batch to batch.

“I’m really curious to see if this new (not new) market achieves levels of standardization in the long run,” says Stoker. “Product classification is a good example, because a unified approach would definitely help the general public, but on the flip side wouldn’t support creative differentiation. Everything’s so fresh right now, it’s super fun watching it all unfold. Time will tell.” 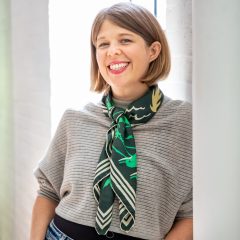