Jesse B. StaniforthOctober 18, 2018
Share
Share on Twitter   Share on Facebook
Print
Jesse B. Staniforth/Leafly
On Legalization Day at 10:00 am, three outlets of the government-run Société Québécoise du Cannabis (SQDC) opened their doors in Montreal, out of twelve across the province—one located in the suburb of Ahuntsic-Cartierville, across from big-box park Marché Centrale; one located downtown on Ste-Catherine and Mansfield; and one in the former Plaza Saint-Hubert.

I visited all three to meet the people who braved chilly weather and a strong wind to buy Canada’s first legal recreational cannabis.

The hardest Montreal SQDC to get to if you’re not from the area and using public transportation was also the least pleasant to wait at, due to the wind-tunnel effect of nearby buildings funneling the day’s cold and gusty wind directly at those waiting under heavy layers of clothing. But it was also the shortest wait of the day, at roughly three hours. 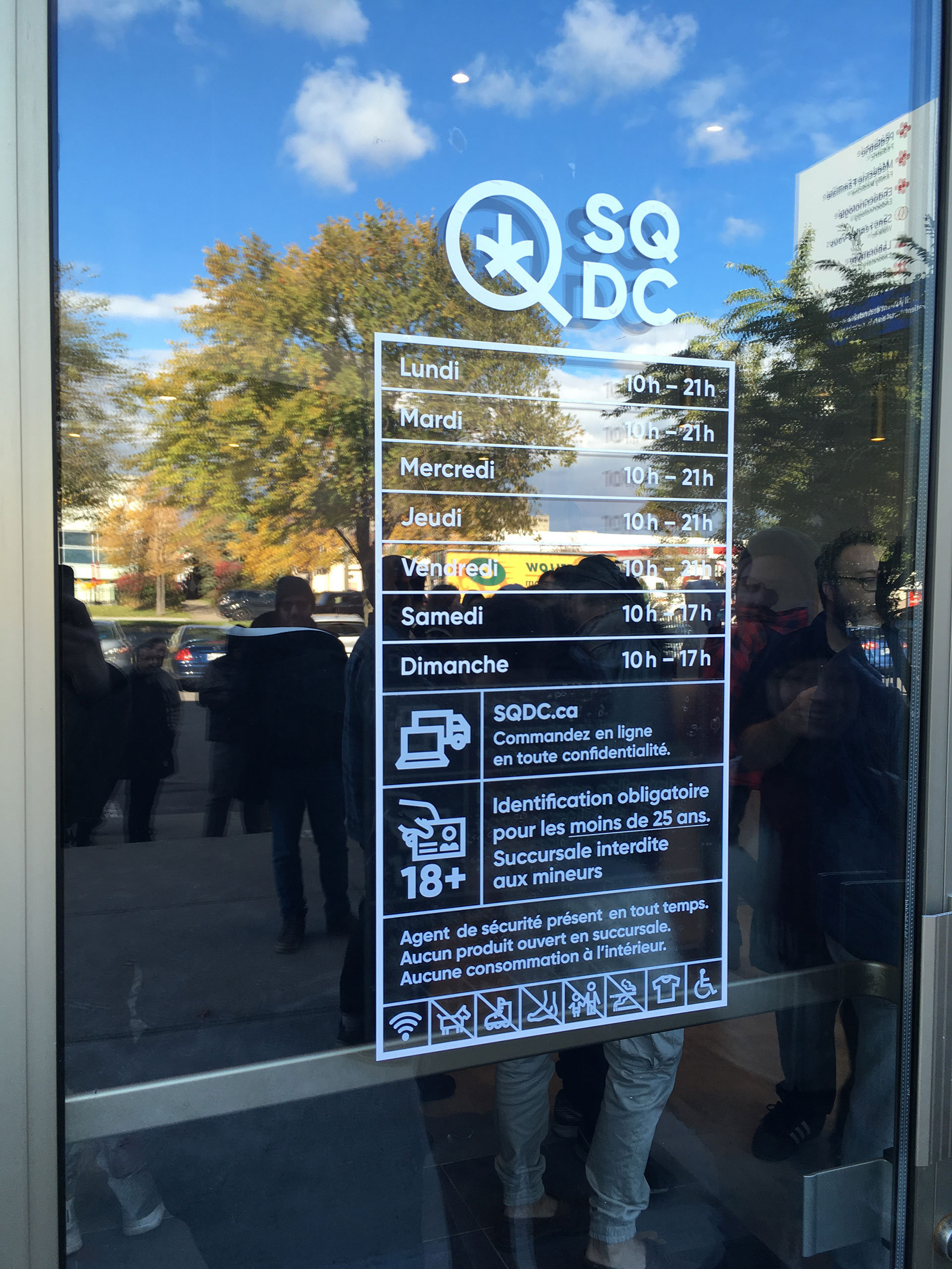 The character of the crowd showed early when Adam, a 24-year-old student who uses a walker because of reduced mobility, arrived. The front of the line opened up and everyone agreed to allow him to cut in and reduce his time on his feet.

“I want to smoke my weed legally,” he said. “I’ve been a cannabis user 13 years—I started at 11. I know that’s young, but I was hyperactive, so I needed to smoke to run my emotions. I smoke it because I enjoy it.”

Nearby, Karen, a project and operations manager for a consulting firm said lining up for Day One was a political statement. “People have been fighting for this for a long time, so I think it’s important to give a strong message right out of the gate and prove to the government it’s worthwhile. It’s definitely time for the stigma to end around the use of cannabis.”

Legal Cannabis in Quebec: What You Should Know

The real action of the day was at the SQDC’s downtown location, on Sainte-Catherine, by Dominion Square. When I arrived there around 2:00 pm, the line was rounding the corner of Metcalfe Street and stretching two blocks toward René-Levesque Boulevard. Media trucks were lined up in front of the store, where the atmosphere was celebratory.

Retiree Cathy, 61, was in line with her son.

“We like to smoke,” she said, “so we wanted to see what was going on and what the prices looked like.”

She started using cannabis at 15, though she never used very much, but it made her into a lifetime cannabis users. Legalization was a big deal for her.

“I really think it’s great that I can buy it legally now. I think it’ll stop a lot of people who are overcharging and taking advantage of you, and not selling good weed at all. This is going to be better.”

She didn’t plan her strain choices in advance and said she’d leave it up to her son to pick something out for her. Thomas, 27, is an expert—and a black-market cannabis dealer. His plan was to buy the highest quality he could find to compare it with the premium cannabis he sources illegally.

“I came here to see what the best is,” Thomas said, “and see if there’s anything newer than Northern Lights, or Tangerine Dream—these are strains from the ‘80s and ‘90s. We don’t really want that anymore. We want the new strains that have been crossed 20 times.”

Yvan, a 44-year-old IT worker, couldn’t wait to sample LP-produced cannabis. Speaking in French, he said, “The stock on the black market is garbage. They lower the quality to make a profit, which is awful. We’re tired of buying garbage. Legitimate cannabis can’t be any worse than on the black market.”

Tim, a 19-year-old construction worker, and Yann, a 29-year-old graphic design student, waited side by side. They agreed the line was longer than they’d hoped—when I spoke to them they were in striking distance of the door, and had been waiting more than four and a half hours.

“But this is a historical moment,” he said. “This is the first step in a long walk: we can buy legal weed for the first time in our lives. I think it’s a good thing to do to show our support for the new law.”

Shortages were beginning to emerge. Kay, a 21-year-old sociology student at Concordia, had planned on buying Hexo’s proprietary Northern Lights strain Azul, but saw the last products sold just as he reached the counter. He got Soleil’s Harmonzer and Hexo’s Sierra instead.

“I just waited five hours in line—for ten minutes of glory!” he laughed. “Is it worth it? I haven’t tried it yet!” 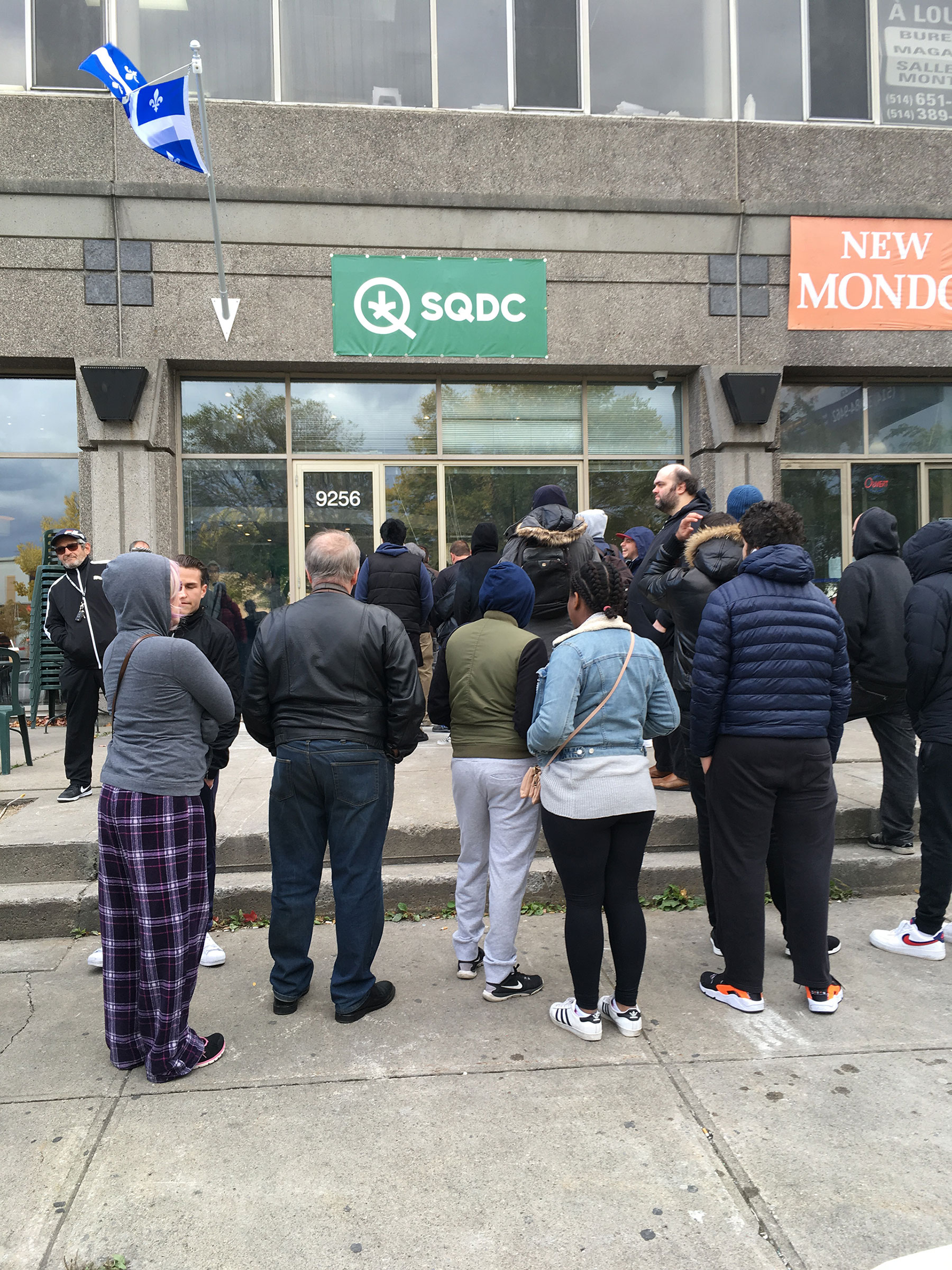 The third SQDC offered a four-hour line running the length of the former Plaza Saint-Hubert, which is currently under serious construction. While those waiting for the SQDC were sheltered from the wind, there was no protection against the noise of jackhammers. The crowd had a critical mass of young men in their twenties, but beyond that represented people of seemingly every age and ethnicity.

One difference at the Saint-Hubert location was the presence of union organizers with a large flag at the front of the line.

Charles-David Emery of union the Confédération des Syndicats Nationaux told me, in French, that the SQDC, though it’s an offshoot of provincial liquor board the Société des Alcools du Québec and a state business, is a new and independent business, so its employees are not unionized. He was hoping to bring them onboard.

Gabriel, a 20-year-old bar employee about to return to schooling as a pastry chef, first tried lining up at the Ste-Catherine Street location downtown.

For Gabriel, the helpfulness of the staff was what impressed him the most—he was happy to have them explaining everything from the outset and helping him find strains that would meet his needs. He also approved of the approach of grading cannabis by strength, from mild to strong.

“I didn’t just find what I was looking for, I found the strain I’ve been missing for a long time,” he said. “Tangerine Dream—I tried it once and thought it was perfect, then I couldn’t find it again! But I’m glad I got here when I did, because things are selling fast.”

The oldest person I spoke to was Jean, 73, a teacher in a hurry to get to class with his paper bag. He began smoking cannabis once or twice a week 50 years ago and has kept it up since. “It was a four hour wait, but I found what I wanted—three different strains that range from mild to strong.”

Street outreach worker Emmanuelle, 55, was the rare character in the SQDC line who’d virtually never used cannabis, beyond a couple of puffs in her youth. 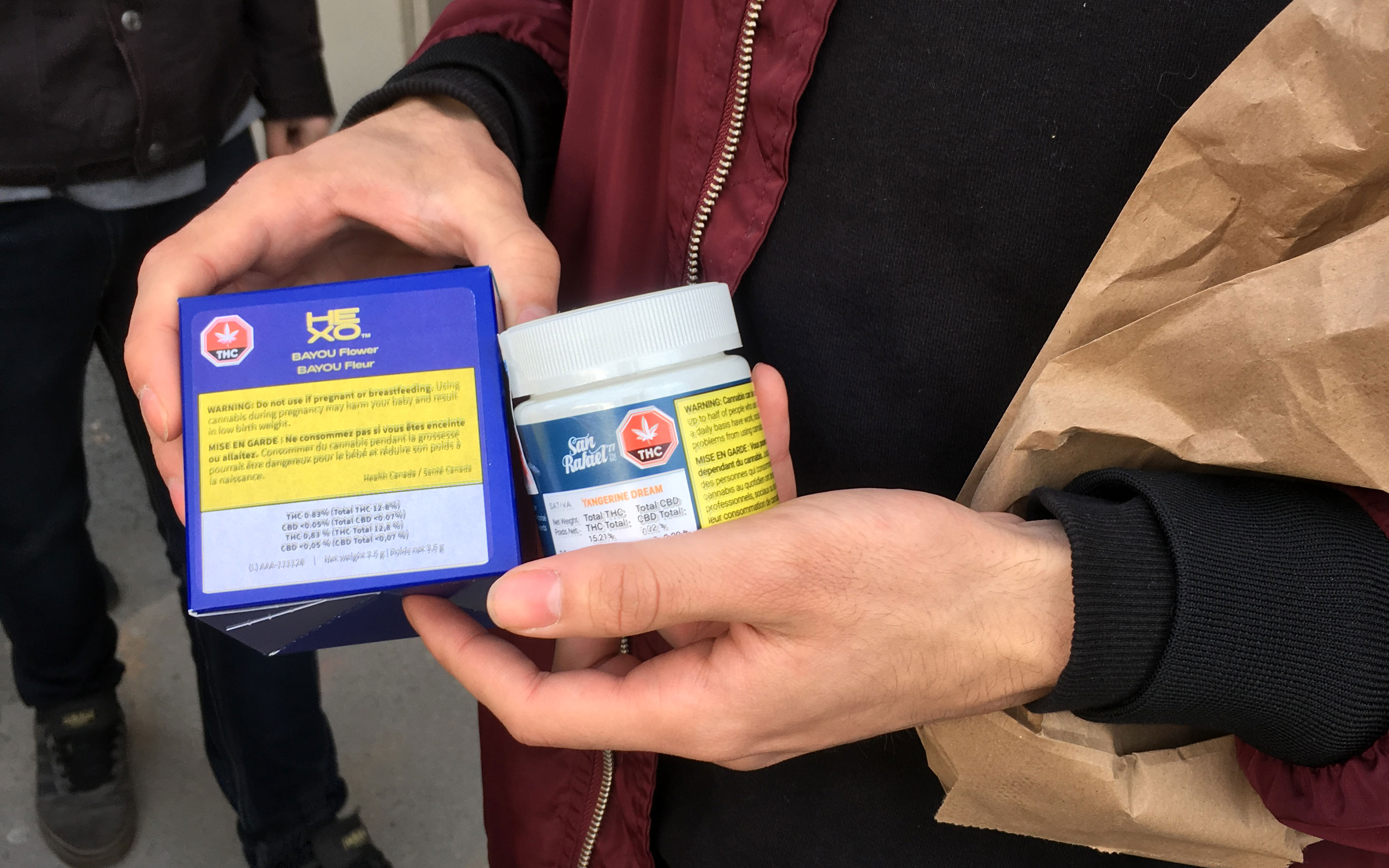 “I’m like a baby,” she laughed. “I’m interested to know what the government is selling. Is it good quality? My friend’s going to buy, so I came with her.”

However, she was not happy that the stores check government-issue ID, since many homeless people have none. As well, she was indignant about the possibility the CAQ government would ban smoking cannabis in public, effectively re-criminalizing it for homeless people.

Her friend Marcia, a 51-year-old massage therapist, added, “Landlords are now saying you can’t smoke it in your apartment, and the CAQ wants to make it so we can’t smoke it in the street—so what am I doing standing in line for three hours?”

She hadn’t intended to come out, but the SQDC website wouldn’t accept her credit card.

“So here I am,” she laughed, “freezing my ass, hoping there’ll still be something left when we get there. There’s a strain called Banana Split I like that I was hoping to get a gram of, but we’ll see.”

As of this writing, the SQDC adventure is over. Unlike Newfoundland, which will allow its cannabis stores to remain open to 2 a.m., the government of Quebec mandates SQDC outlets close at 9:00 pm.

As a Twitter user called Le Grand Maxime put it at 9:30, “UPDATE: Did I just wait six hours in four degrees for pot so they could close the door of the SQDC in my face? Essentially.”