Which Terpenes Are Found in ‘Kush’ Cannabis Strains?

Dante Jordan March 6, 2019
Share
Share on Twitter   Share on Facebook
Print
In this series, Leafly explores what makes each family of strains unique based on their terpene profiles. A strain “family” refers to a line of hybrids branching from one genetic matriarch that expresses unique and desirable characteristics that breeders seek to build upon. This introductory primer will help you learn a little more about cannabis breeding and strain variability.

The term “Kush” is as familiar with cannabis enthusiasts as “puff, puff, pass.” The word is derived from cannabis that originated in the Hindu Kush mountain range, but culturally, most of us have used it to describe high-grade cannabis.

What is ‘Kush’ cannabis?

With there being so many Kush-named strains on the market, we have to wonder: are there notable similarities or differences between them?

To answer this question, we looked at the terpene profiles of four popular THC-dominant Kush strains: OG Kush, Kosher Kush, Kimbo Kush, and Bubba Kush. This composite chemical data was provided by Confidence Analytics, a leading testing lab in Washington. 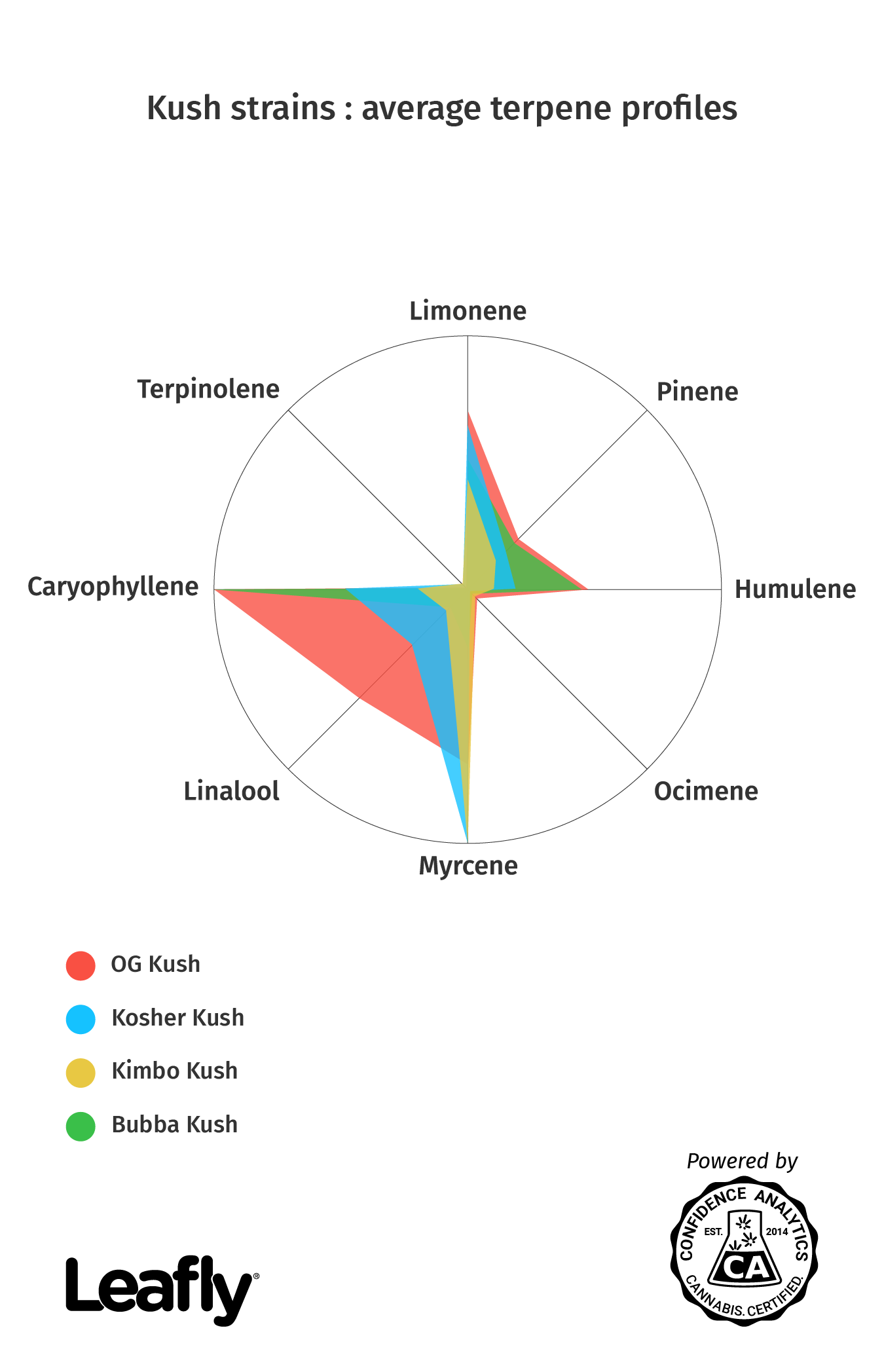 Terpenes are the aromatic compounds within cannabis that provides its aroma and flavors. When you smell skunk, grape, lemon, berry, or pine—those are the terps talking. It’s believed that terpenes shape the experience of cannabis by interacting with our bodies and other compounds such as THC and CBD.

Beyond THC: It’s time to assert the primacy of terpenes

The average terpene profiles of four Kush strains—overlaid in the graphic above—look similar, suggesting that they may provide similar experiences. But when you break down the data for each individual strain, each has a different story to tell. 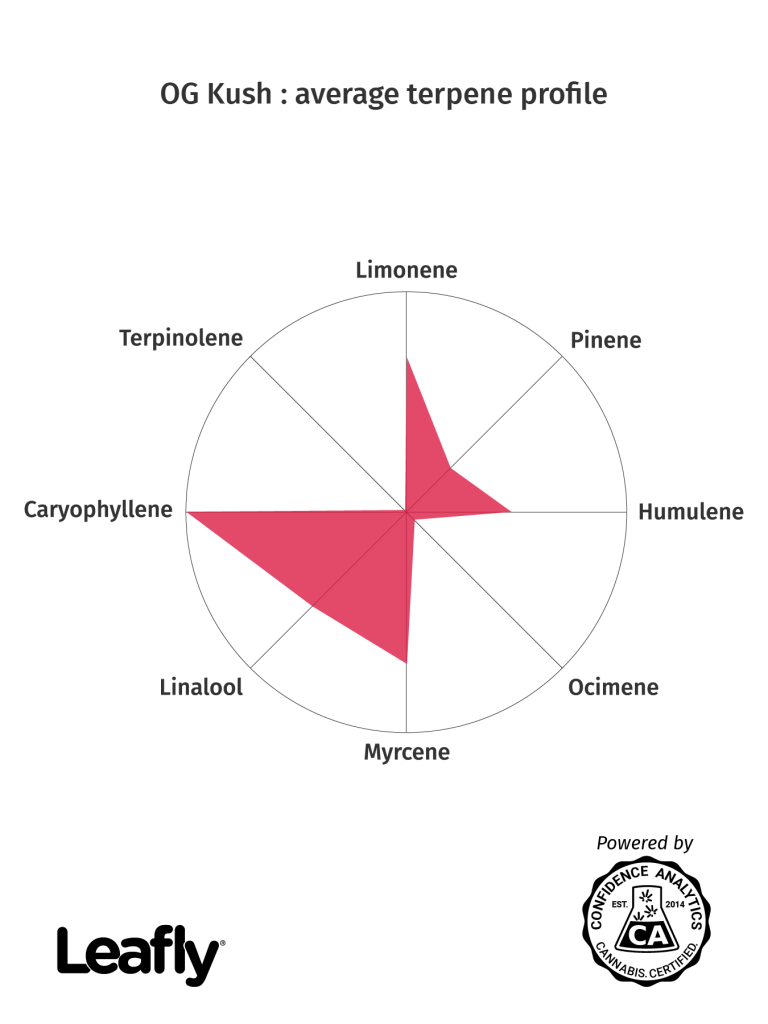 Originally bred in Florida, then brought to California to get that real good grow love from Josh D, OG Kush is one of the most influential cannabis strains of all time—although its genetic lineage is murky. According to Josh D, OG Kush is a cross between an unnamed strain from Northern California and a Hindu Kush varietal from Amsterdam. Its aroma features pungent funkiness, hints of lemon, and gassy undertones.

What Are You Smoking? Episode 12: Josh D and the Real OG Kush Story

OG Kush expresses abundant amounts of caryophyllene, limonene, and myrcene. These terpenes are believed to relieve stress and anxiety, and promote relaxation in the mind and body. OG Kush also contains a moderate amount of linalool, pinene, and humulene—terpenes which may reinforce this strain’s relaxing effects and offer potential therapeutic benefits like inflammation relief.

At this point, we understand that cannabinoids and terpenes can affect each consumer differently. Personally speaking, OG Kush provides a heavy, yet manageable high. It can put me down if I’m already in a tired or chill state of mine, but the high generally isn’t too sleepy or couchlocking. For other consumers, OG Kush is that knockout punch that’ll send you into Dreamville.

That’s why lab data is important—it helps you understand how different amounts of cannabinoids and terpenes affect you personally. 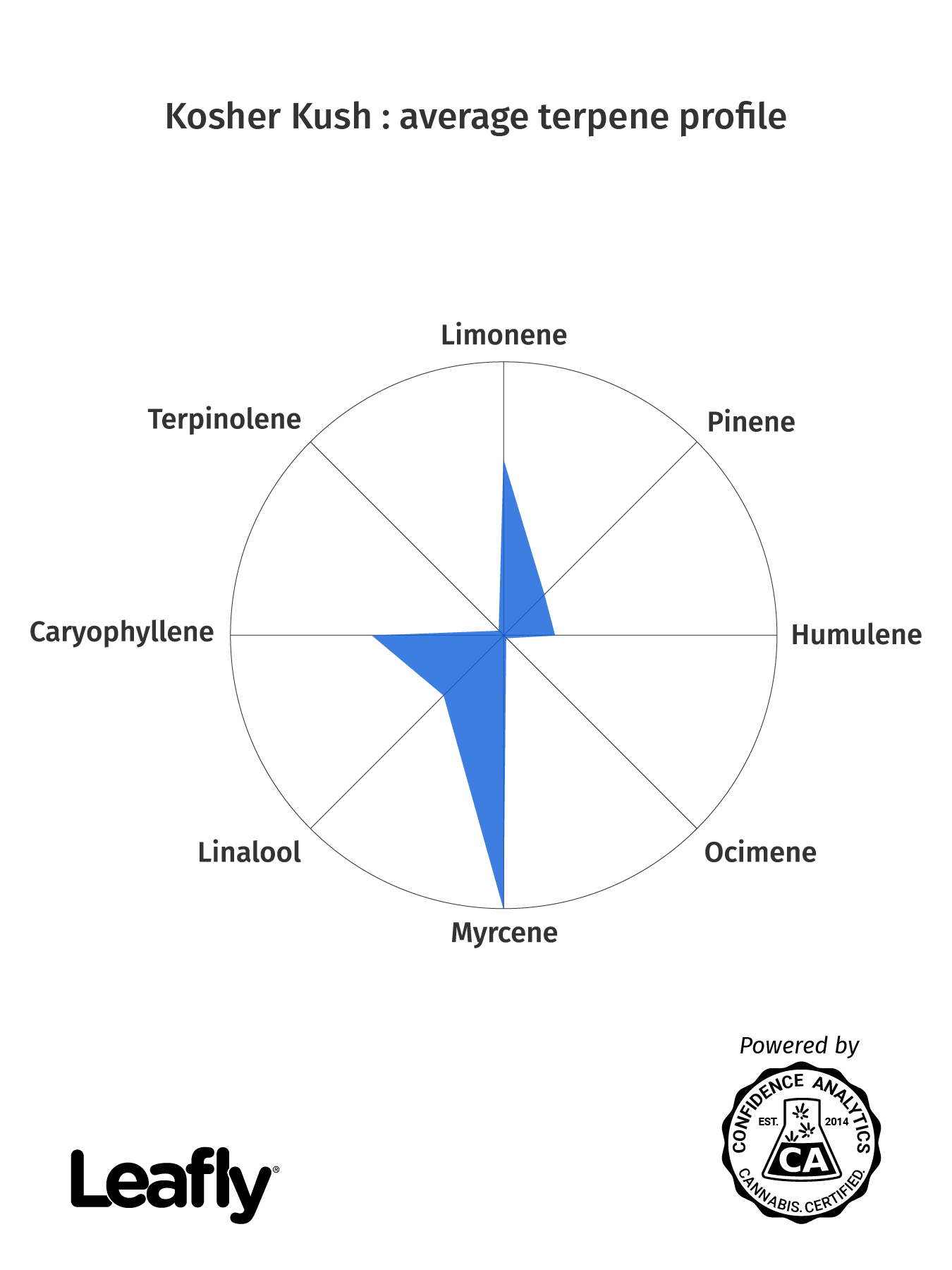 Kosher Kush is one of the most prolific phenotypes of OG Kush. While a brilliant reflection of OG, Kosher Kush’s terpene profile looks a bit different. While still influenced by linalool, humulene, and pinene, Kosher is clearly dominant in myrcene, followed by limonene and caryophyllene.

Though some find Kosher Kush to carry a sweeter aroma than OG Kush, the two tend to provide similar experiences. It personally leaves me with a body full of feel-good, however some consumers say Kosher Kush provides a ZzzQuil-like experience, especially when consumed in exorbitant amounts. 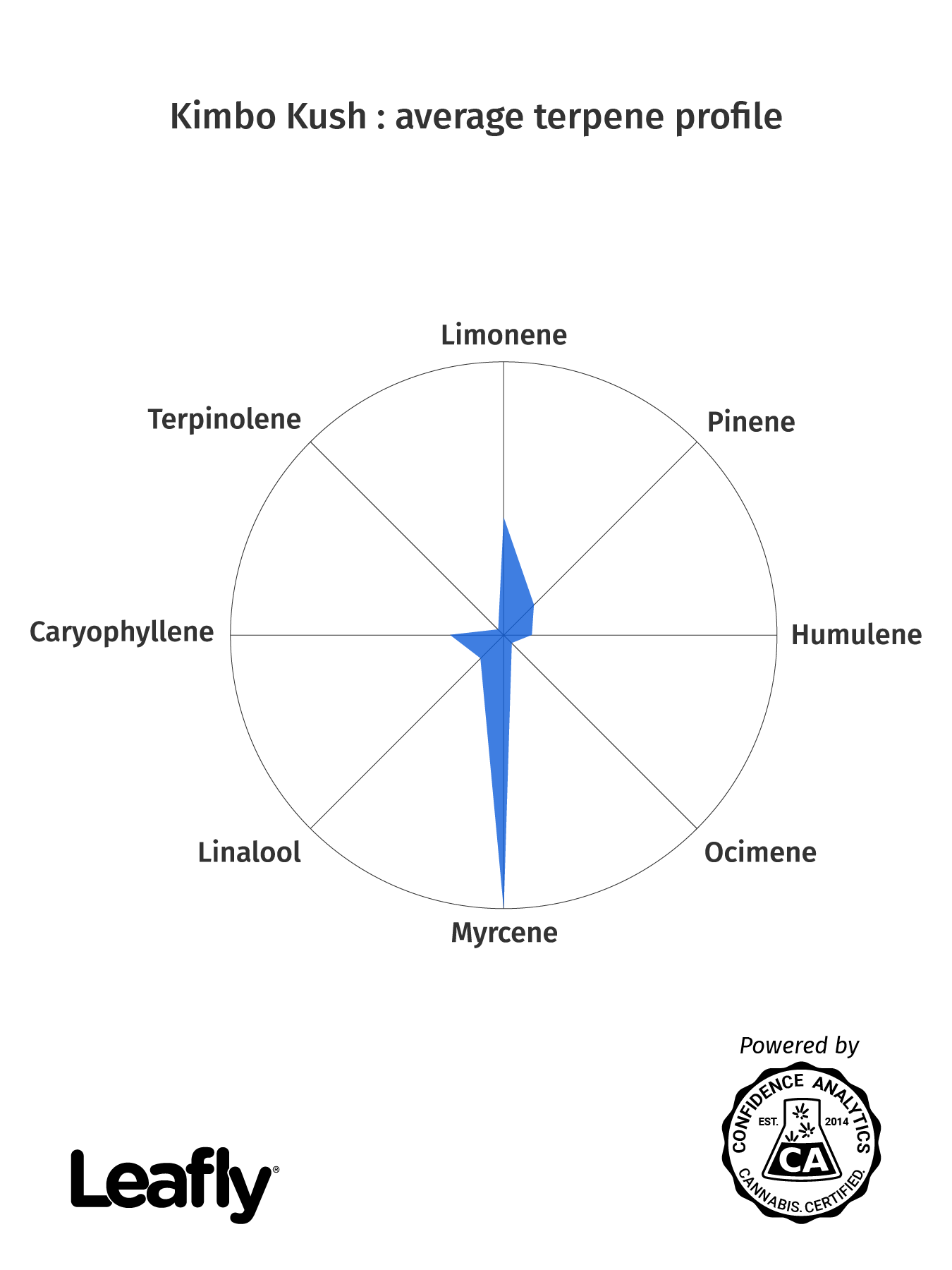 Kimbo Kush is a cross between Blackberry Kush and Starfighter. Though not a descendant of OG Kush, Kimbo produces a similar terpene profile to Kosher Kush. Also dominant in myrcene with limonene and caryophyllene trailing behind, Kimbo Kush tends to offer a heavier-than-average experience.

While this strain is influenced by multiple terpenes, myrcene—which is believed to reinforce the potent punch of high-THC strains—is indeed the most abundant. 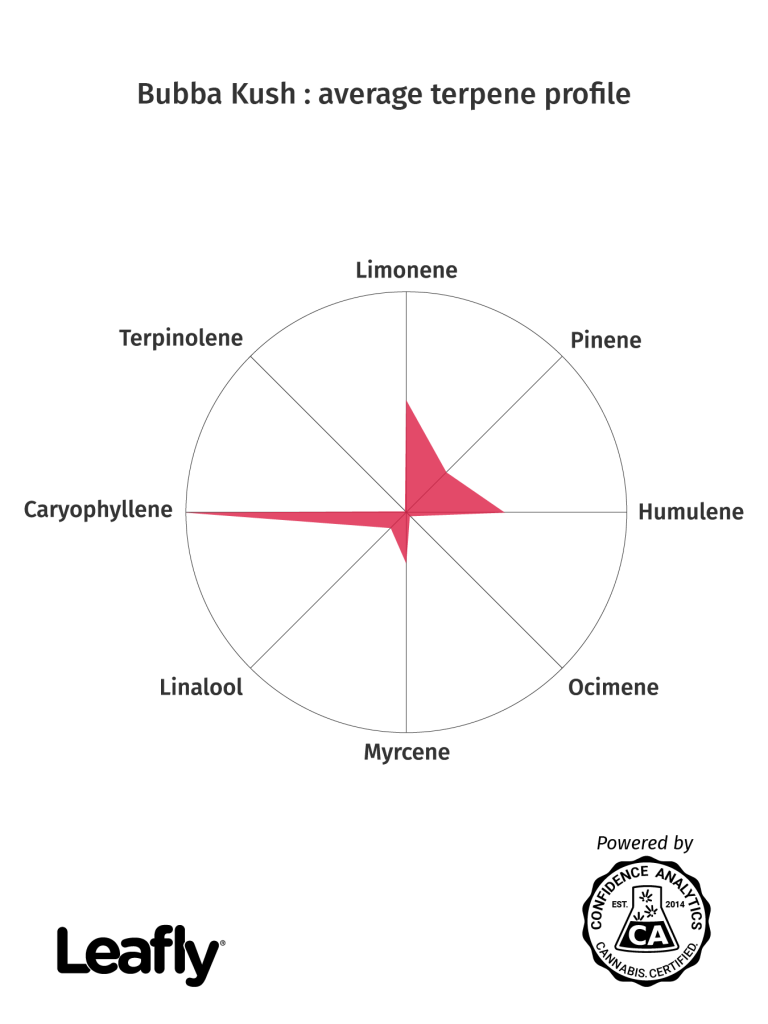 Out of all of the observed Kush data, Bubba Kush is the biggest outlier in terms of terpene profile. Dominant in caryophyllene and abundant in limonene and humulene, Bubba Kush is the only strain in our dataset that produces lower levels of myrcene.

Bubba Kush is the only strain in our dataset that produces lower levels of myrcene.

Considering most consumers seek Bubba Kush for its relaxing experience, it’s surprising that it contains very little of the terpene that cannabis enthusiasts associate most with the couchlock effect.

Bubba Kush is a perfect example of why you can’t attribute the effects of cannabis to a single terpene. Every terpene affects the perceived experience, and this goes to show how important it is to consider the complete symphony of cannabinoids and terpenes when selecting a strain.